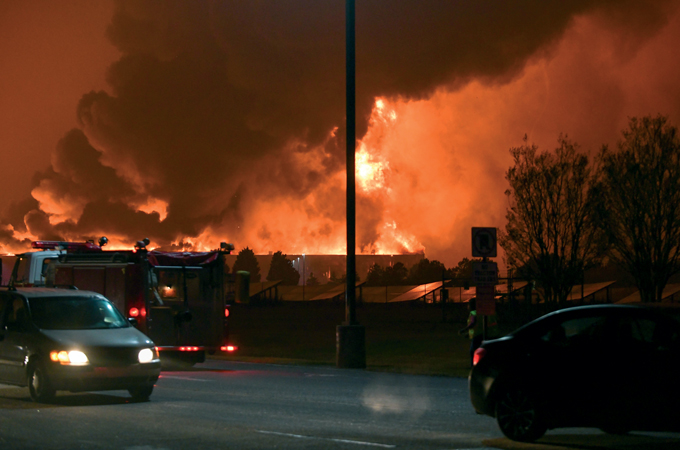 Rocky Mount Mayor Sandy Roberson shivered, though heat from the smoldering ruins drifted across the parking lot. “It takes 3,000 degrees to melt steel,” he says. But before him, massive beams twisted like a kid’s candy swizzle stick. “I stood there, watching N.C. Forest Service helicopters dumping water on [the fire] and thinking about the impact it was going to have on our community.”

A week before Christmas, Roberson had rushed to the distribution center of QVC, eight miles from downtown Rocky Mount. The fire had flashed through the television shopping channel’s 1.2-million-square-foot fulfillment center, destroying 70% of it. Three hundred workers on site at the time escaped. Unfortunately, one staffer was later found dead. A $20,000 reward for information of the fire’s cause has been posted.

The devastation chilled Roberson and the community. In a region beset by decades of economic setbacks, some quarters see lessons in disaster recovery in how local officials responded. Many were learned the hard way in 1999 when the Tar River flooded during Hurricane Floyd, destroying a chunk of the area’s economic base.

The QVC fire left 2,500 or more full-time and contract employees out of jobs. But while smoke was still rising, Edgecombe County Manager Eric Evans was talking with officials of Turning Point Workforce Development Board, the local arm of the state’s jobs commission. Within hours, the agency was setting up job fairs.

A few weeks later at the cavernous Rocky Mount Event Center, some 400 QVC employees queued up to meet with 40 employers including CSX, Cummins and Pfizer. Some had already signed up potential employees through virtual job fairs.

Others were hired on the spot, says Norris Tolson, president of Carolinas Gateway Partnership, the region’s public-private economic recruiting organization. “Fortunately, we’re in an aggressive growth mode in the region and have lots of jobs in the community,” he says.

QVC, which reported $8 billion in revenue during the first nine months of 2021, kicked in $100,000 toward an employee aid fund organized by Gateway, the Rocky Mount Chamber of Commerce, United Way and local businesses.

The Rocky Mount-based Golden LEAF Foundation says it is primed to possibly pump millions into efforts to attract replacement industries or help QVC rebuild. The group administers a $1 billion fund collected from the settlement for tobacco’s health impact.

Rocky Mount, whose population of about 50,000 is little changed from 20 years ago, has deep experience in responding to negative news, to be sure. It has spent three decades beating the bushes for pharmaceutical, logistics and high-tech industries to replace dwindling tobacco, textile and other legacy employers. The relatively new employers face an unusually tight labor market.

None of which indicates that the road ahead for the QVC employees is smooth, Tolson and others say. They come from nearly 20 eastern North Carolina and southern Virginia counties. The center remains a forbidding, blackened hulk, its future uncertain.

“We haven’t made any long-term decisions, but we know the building will be closed for an extended period and there won’t be work there for the foreseeable future,” says Illana McCabe, a spokeswoman for West Chester, Pa.-based QVC. The company is owned by Curate Retail, a public company that was formerly named Liberty Interactive.

Still, optimistic local officials hope that QVC’s guarded response means it will rebuild. “One whole section, their newest addition, was not even smoke-damaged,” Evans says. That section contains the computer brains of the highly robotic center. “When you consider that, from a business sense, if they built somewhere else, they’d have to start from scratch,” the county manager adds.

QVC built the center for about $80 million in 1999, making it an early tenant of the 1,460-acre Kingsboro megasite. It has invested millions more in upgrades and expansions. Tolson, Roberson and others say state and local agencies will likely make incentives available, as if recruiting a new industry.

After the fire, QVC provided $500 per worker and checks covering at least four weeks’ pay. By February, however, workers opened mailboxes to find state-required notifications that they were permanently laid off.

Centura was one of the most painful, with its roots in 1898 as Planters Bank and Trust. After a series of mergers, its central office and other units moved to Raleigh in 2005, taking 1,000 Rocky Mount jobs. Hardee’s, the fast-food chain born in eastern North Carolina, moved its headquarters in the same period, taking hundreds of jobs.

Since then, Gateway Partnership, the prime industrial recruiter for Edgecombe County, Rocky Mount, Tarboro and Nashville, has pushed diversification relentlessly. Tolson counts off successes such as the new Carolina Connector intermodal rail center, with about 300 direct and 1,300 spinoff jobs, and the relocation of the N.C. Division of Motor Vehicles to the six-story, former Hardee’s headquarters, with 500 jobs.

Pharmaceutical giant Pfizer has about 3,000 employees and is regularly expanding.

Tolson says Gateway is negotiating with about 50 potential industries. “Our normal closure rate is about 10%,” he says, which could mean hundreds of job openings for former QVC workers.

“We’re still a poor community, with remnants of the old economy,” says Roberson. “But this time we’re not losing jobs because employers don’t want to be here.” ■