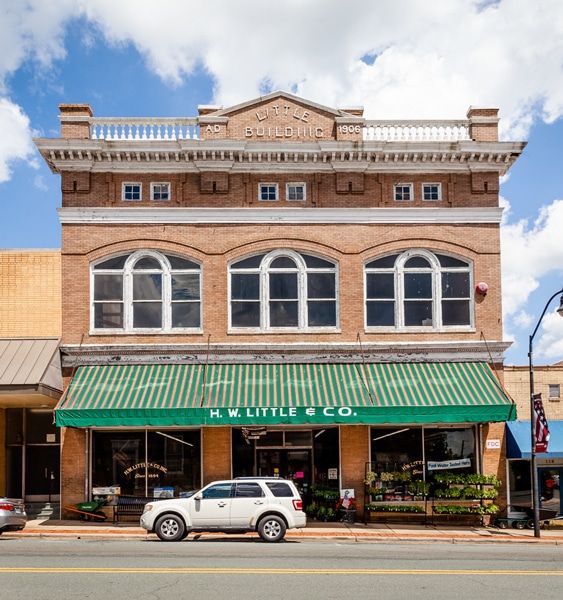 Parson’s Rexall Drugs, a fixture in Wadesboro since not long after the Civil War, seemed as indomitable as its historic building on Greene Street when Tom Taylor and his partner, John Isenberg, bought it in early 1987. For one thing, they were in good company.

Across the street, H.W. Little & Co. Hardware’s building was almost as timeless, its tan brick facade proclaiming it “The Little Building, A.D. 1906.”

They had no way of knowing they would soon be battling with the world’s most ferocious retailer. Less than a year after Taylor and Isenberg closed the deal, Walmart came to town, including a pharmacy that could undercut their prices by selling in enormous volume. At the hardware store, sales of garden seeds, fertilizer and galvanized buckets and sprinkling pots slumped immediately, says owner Carly Little, great-granddaughter of the founder.

“Walmart was one-stop,” she says. “You could pick up your medicine, lawn and garden supplies, or a white, button-down shirt if you needed to go to a funeral, wedding or a job interview.”

Grit and hard work have kept the two businesses afloat, while many locally owned peers buckled under pressure from the giant discounter. Now, more than three decades later, the tables have turned.

In March, Walmart announced it was closing its Wadesboro store and a smaller one in Lumberton, idling 300 people. More than 200 worked at the Wadesboro store, formerly one of Anson County’s largest employers. At corporate headquarters in Bentonville, Ark., spokesman Phillip Keene says most were offered jobs in neighboring Walmarts, such as in Monroe in Union County 30 miles to the west. It was unclear by early July how many had taken the offer.

Keene says the retailer has 216 stores and nearly 57,000 employees in North Carolina, making it among the state’s biggest employers. It collected nearly $700 million in sales taxes last year.

Retail experts and others say the Wadesboro and Lumberton closings represent a changing strategy by Walmart, whose arrival in communities once triggered wholesale closings of mom-and-pop retailers. Since Walmart’s departure in late March, business at H.W. Little has rebounded 10% to 20%.

Less interested in dominating every U.S. hamlet with brick-and-mortar sites, Walmart is more focused on building its online offerings and delivery services to compete with e-commerce leader Amazon. The revised strategy is working, with online sales surging 74% in the first quarter, aided by demand from customers unwilling to leave their homes because of coronavirus fears. In mid-July, Walmart shares traded near the all-time high of $133.

“Walmart opened 10 months after we bought this business,” Taylor says. “They discounted heavily when they first opened, and it really made it difficult. We had to struggle for a while, but then a lot of our customers realized that we might cost a little more, but there were other benefits in the long run.”

Views about Walmart have changed, with statewide unemployment soaring because of the COVID-19 impact. Keene says the company’s average wage in North Carolina is $13.91 an hour, which equates to an average annual salary of about $27,000, based on full-time employment. That’s below the state average of $34,125, and few Walmart employees qualify as full time. However, those jobs have become valuable in the pandemic era.
While closing in Wadesboro and Lumberton, Walmart has hired about 7,000 workers elsewhere in the state and awarded $13.8 million in bonuses this year. Food Lion, Lowe’s and other big retailers also ramped up hiring as they added delivery services, online shopping and other features demanded by new laws and virus-wary customers.

The loss of the 120,000-square-foot store is a paradox for Wadesboro. While Walmart squeezed out many stores, now that it’s gone, local residents have few shopping choices. Some miss the giant. “It’s hard to say they filled a void, but they did,” Little says. “They’ve been a double-edged sword,” adds Taylor, who shopped there out of necessity. “When local stores closed, that left Walmart as the only option.”

“The retail environment now and even before the virus is changing,” says Marek, who is the author of several books on marketing. “Walmart is changing strategy. Once, they positioned every store so they dominated the market and didn’t allow competitors to come in even if it cannibalized sales from their other stores. Now, their main competitor is my computer, my cellphone, my laptop. Trying to saturate the market isn’t as effective when you’re up against Amazon.”

His point is at work in Wadesboro, where a smaller Roses discount department store, a Tractor Supply hardware shop, and grocer Food Lion share a modern strip shopping center. The Roses location, though only one-third as large, opened April 1, just as Walmart was closing. All are thriving, say Taylor, Little and others. “Used to be, on a good day, that parking lot was half full,” Marek says. “Now, you can’t find a parking spot.”

Other factors are helping Wadesboro and Anson weather the Walmart loss. Through the end of 2019, state figures show its unemployment rate was about 3.8%, barely above the state average. By May of this year, spiked by the pandemic, the rate had soared to well above 10%. Manufacturing, once the county’s prime employer before fading in the 1990s, is showing a resurgence.

Hornwood Inc. in Lilesville makes fabric for medical gowns and protective masks, in huge demand in the pandemic, and employs more than 500, Marek says. The coming Interstate 74 should enhance the county’s hospitality industry, battered by virus shutdowns.

The biggest takeaway may be a subtle one, though — an appreciation of local businesses. “I had a gentleman say, ‘I’d rather come here and spend a little more and know if I called you in the middle of the night you’d take care of it,’” Taylor says. ■