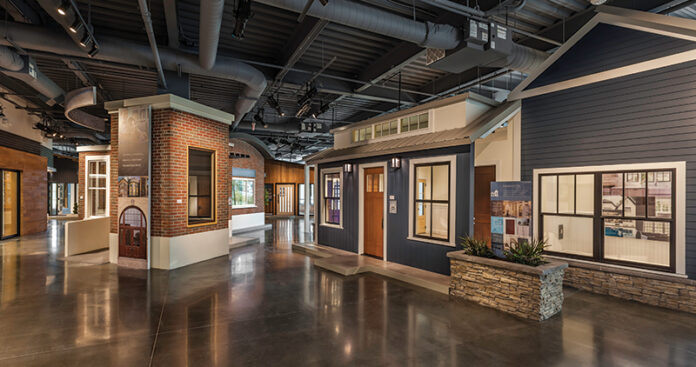 This summer Jeld-Wen, one of the world’s leading window and door manufacturers, is opening a plant in Statesville that will raise the company’s profile in North Carolina, where it moved its headquarters six years ago.

The company plans to hire as many as 235 employees and invest $7.9 million in the Iredell County facility, which will make commercial vinyl windows for apartment buildings. The move comes two years after Jeld-Wen acquired the VPI Quality Windows line.

The company now has more than 540 N.C. employees, including about 330 at its Charlotte headquarters and more than 210 at a door plant in North Wilkesboro. Globally, it employs 23,000 at about 140 manufacturing and distribution facilities in 19 countries. Last year’s revenue totaled $4.2 billion with doors making up about two-thirds of sales. Windows contribute about 20%.

Jeld-Wen has been building windows and doors in North Carolina for decades, but its roots are from far across the nation. The company was founded in 1960 by a young Air Force veteran named Richard Wendt, who had been sent by an Iowa window company to try to turn around a factory in Klamath Falls, Ore., in 1957. He did, but the company decided to sell the plant anyway, and Wendt and several employees bought it.

Jeld-Wen’s name has an unique origin story: The first part, Jeld, came from the first letters of the first names of Wendt’s sister (Jewel), mom (Evelyn), dad (Lester), and his own (Dick). The second part was their truncated last name.

From that modest beginning, Wendt created a national footprint, opening a window plant in 1962 in Charlotte. The company became one of Oregon’s largest employers with more than 1,000 workers. Wendt passed away in 2010 at 79, and the past decade or so has brought significant changes to his company.

These included a little-publicized headquarters move to Charlotte. The Portland, Ore., Oregonian newspaper in 2015 wrote the move “completes a quiet corporate transition out of Oregon, where Jeld-Wen once cut a high profile, employing thousands” and holding naming rights to the city’s minor-league baseball stadium.

The move put Jeld-Wen closer to major customers such as Atlanta-based Home Depot, which accounts for 15% of Jeld-Wen’s revenue, more than anyone else.

Another big change was in ownership. The 2007-09 recession crushed the housing industry, and Jeld-Wen, which had taken on debt, struggled as revenue dropped. In 2011,

Toronto-based private-equity firm Onex acquired a controlling interest for $871 million in a deal valuing the business at $1.5 billion, the Oregonian reported. That led to the “transformation of our business from a family-run operation to a global organization with independent, professional management,” according to a company filing in 2016, when it was preparing to go public the following year. Onex and its affiliates owned about 25% of Jeld-Wen stock as of March.

The window and door industry is fragmented with Jeld-Wen’s key rivals including Marvin, Pella, Andersen and Ply Gem, which is part of Cary-based Cornerstone Building Brands.

Windows, particularly, are manufactured for the requirements of specific regions and climates. They are fragile, increasingly complex, and challenging to transport. Jeld-Wen has spent the past decade acquiring companies all over the world.

CEO Gary Michel was hired in 2018 from Honeywell after his predecessor, Mark Beck, left the company after about two years amid slumping sales. Company shares were trading for about $24 in mid-July, little changed from the $23 price in the IPO four years earlier.

To spur growth, Michel instituted a program called the Jeld-Wen Excellence Model aimed at reducing waste, shortening lead times and increasing productivity. The plan enabled growth from existing facilities — not simply through acquisitions. Results suggest improvements with net revenue growing at a 4.6% compound annual rate between 2015 and 2020 and adjusted EBITDA (earnings before interest, taxes, depreciation and amortization) increasing by 7.5%. Now the company thinks it can grow revenue by 6% to 8% on a CAGR basis by 2025 and can achieve an adjusted EBITDA margin of 15% to 17% in 2025, up from an expected 11% this year.

Dan Jacobs, a Jeld-Wen vice president, says the pandemic added its own challenges over the past 15 months. Jacobs has been with the company since graduating from college 13 years ago.

“For people like myself that are young in their careers, to industry veterans that have been manufacturing things for 40 years, I think we all learned something during the pandemic,” says Jacobs, who started out selling to Home Depot. The No. 1 priority was keeping employees safe, he says. Then it was managing disruptions to the supply chain and dealing with labor shortages.

“At first, demand fell out from underneath us, and some of the supply chain issues were covered up because the demand wasn’t there,” he says. “But then demand came back, not only in full force, but something nobody could have predicted. Everybody’s sitting at home, and they want to update their home. And building materials went through the roof.

The company’s effort to create a more efficient network of plants and distribution centers didn’t leave North Carolina unscathed. In late 2019, Jeld-Wen closed a door plant in Lexington, which eliminated 135 jobs. The company has said it wants to shrink its global manufacturing and distribution footprint — 24.6 million square feet at about 140 sites at the end of 2018 — by more than 3 million square feet by 2022. Achieving financial goals requires modernizing technology and achieving more productivity and volume at fewer facilities.

North Carolina is supporting Jeld-Wen’s new Iredell plant, offering $2.2 million in incentives over 12 years if the company creates all of the jobs it proposes. The state looks at each application on its own merits, and it doesn’t hurt to have a major corporate headquarters in the Queen City. It recently donated $900,000 for Charlotte arts funding. Michel, the CEO, has been named chairman of the Greater Charlotte Heart Ball, a major fundraiser for the American Heart Association. Jeld-Wen has donated to a St. Jude Dream Home in Charlotte, and the company is a “touchdown” sponsor of the Atrium Health Foundation Keep Pounding 5K.