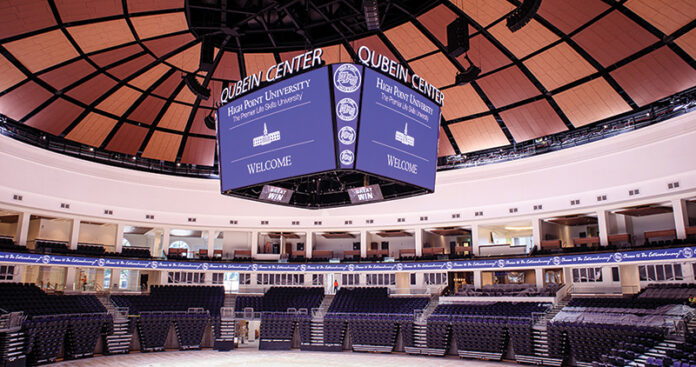 A $170 million structure housing a 4,500-seat arena, a conference center capable of hosting more than 2,500 and a 30-room boutique hotel sounds like a capstone project for a long-serving university president. But the Nido and Mariana Qubein Arena & Conference Center, which opened last month at High Point University, just continues a massive building spree launched shortly after Qubein became president in 2005.

About $380 million of new projects are on the horizon at High Point, including prospective buildings for new dental and law schools and an $85 million library. Qubein, 73, agreed to a new 10-year employment contract in 2019.

Even by High Point’s standards, however, the new center has an audacious scope that Qubein says is unlike anything in U.S. academia. He credits his background giving 7,500 motivational speeches since the mid-1970s, exposing him to many leading conference centers and meeting complexes.

An emigrant from Lebanon who came to the U.S. at age 17 in 1966 with $50, Qubein earned a bachelor’s degree at HPU. By the late 1970s, he was addressing more than 200 business groups annually. Those experiences give him a unique perspective for designing public space, while he says is incorporated at the new building.

Qubein wasn’t thinking about arenas and hotels in 2005 when he became president of High Point, which was started in 1924 by the Methodist Church and city leaders. He was focused on repairing aging buildings and boosting revenue that totaled less than $60 million a year. Enrollment totaled about 1,450 students, with fewer than 100 in graduate programs.

Now, the university has nearly 6,000 students and more than $1 billion in new buildings and takes in $350 million annually, including about half from tuition, he says. The balance comes from food, housing and other concessions and donations from a large pool of alumni, parents and friends.

The new facility is opening debt-free after funding from hundreds of donors. The hotel is named after Ken and Jana Kahn, owners of Palm Beach Gardens, Fla.-based LRP Media Group, an educational-media company.

Each hotel room is sponsored for four-year terms, including some parents who want priority status for staying on campus when visiting their children. A nightly fee is required in addition to the donation.

While universities appreciate all gifts, Qubein notes that major growth hinges on big contributions. Since his arrival, High Point has received 17 gifts of more than $10 million, helping spur surges in enrollment, buildings and community impact. He and his wife pledged $10 million for the new site.

“You need a Rolodex of people who believe in your mission. It’s not just about giving money,” he says. High Point’s mission is to be the best “life skills” university, he says, helping students develop a range of tangible skills to navigate a fast-changing society. The arena-convention center complex furthers that goal by providing real-life business experience for students involved in operating the site along with about 100 new employees.
Qubein pledges it will be heavily used by students, their parents, faculty, staff and the High Point community. Boosting the potential for the school’s basketball team, which is coached by former Kentucky coach Tubby Smith, is a side benefit.

The buildings’ general contractors are Michigan-based Christman Co., which specializes in arenas, and Greensboro-based Samet Corp., which has built about 10 HPU structures.

High Point’s growth has impressed U.S. News & World Report, which has rated it as a No. 1 regional college for 10 years and most innovative for seven. The college has low-interest debt of less than $200 million, says Qubein, who has served as a director at Truist Financial and its predecessors for 30 years.

Strong compensation programs and hefty investment in facilities and research opportunities have led to a devoted faculty and efficient operation, he says. It’s common for HPU faculty to teach five days a week, he adds, contrasting that regimen with shorter schedules typical of many campuses.

Meanwhile, an emphasis on traditional values is fueling growth because many parents of all faiths want their children to learn in an encouraging, safe environment, Qubein says.

“We are a school that believes in America and the very values that built this nation in the first place. Don’t underestimate that.” ■