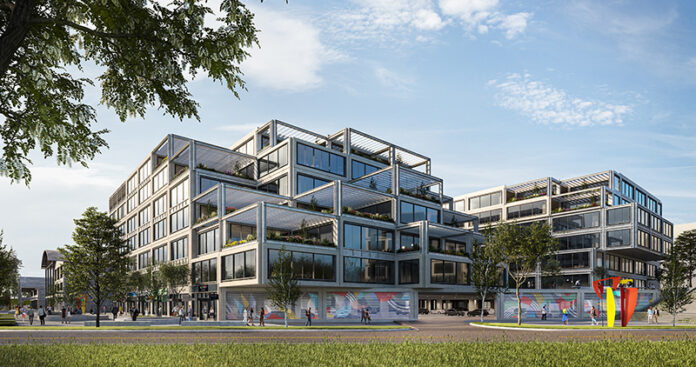 There’s an unofficial contest underway in Raleigh: Who will build the tallest building? It’s a competition that veteran City of Oaks developer Gordon Grubb isn’t entering.

“I’m shocked at the number of rezonings,” Grubb says, alluding to the Raleigh City Council’s approval of taller high-rises and the bevy of developer requests for buildings that will stretch 20 to 40 stories.

“We are very happy doing five stories, and that’s proven to be a competitive advantage during COVID,” says the founder of Raleigh-based Grubb Ventures. Leasing activity at his projects has surged in recent months, partly because many tenants prefer stairs over elevators, he says.

Members of the Grubb family have been prominent N.C. developers for generations. Gordon’s great-grandfather constructed a seven-story building in Salisbury in 1910 that was reportedly then the state’s tallest steel-beamed office building. His father continued the legacy and, in 1987, Gordon joined Charlotte-based Grubb Properties. That company, now led by his brother, Clay, is expanding across the nation.

Gordon split off in 2002 to start Grubb Ventures, preferring to focus on the Triangle and, in most instances, developments that are within a 10-minute drive of his Raleigh home. His specialty is infill projects on the outskirts of the central business district, particularly in the Five Points neighborhood or along tree-lined Glenwood Avenue. In September, he bought Beta Center, a 12- acre tract on Glenwood with two small office buildings, for $17.5 million. A $2.5 million renovation is planned.

But the Grubb project everyone is talking about is on Atlantic Avenue, an industrial corridor that serves as a connector route into downtown. Instead of shooting for the sky, Gordon is digging into city history to develop Raleigh Iron Works, a $150 million live-work-play community. It is his company’s largest undertaking to date and second adaptive reuse of a historical property. Located at the former Peden Steel mill, it is near the Five Points and Mordecai neighborhoods, about 2 miles north of the center city.

“There’s a whole story and authenticity around Raleigh Iron Works, because so many of the monuments and buildings in Raleigh were built with steel that came from Peden Steel,” Grubb says.

Grubb bought the site from the Peden family for $10 million in 2017 and formed a joint venture with Atlanta-based Jamestown in 2020. The Georgia development company has lots of adaptive mixed-use experience, including Optimist Hall in north Charlotte, Chelsea Market in New York City and Ponce City Market in Atlanta.

A tour of Ponce City with Jamestown CEO Matt Bronfman convinced Grubb that “their place-making [expertise] would help us take Raleigh Iron Works to a whole different level. They bring great retail and tech contacts, and we bring the local experience and contacts.”

Construction is underway with letters of intent pending with several prospective tenants. It will include three key structures: The Forge residential building, with 219 apartments; the three-story Bow Truss Building, with 83,000 square feet of office and retail space; and the Double Gable Building, featuring retail, restaurant, and office space on the first level and 65,000 square feet of office space on the second floor.

The office spaces will include outdoor terraces and an adult slide connecting the second floor to the plaza between the Gable Building and The Forge. The apartments range from 430-square- foot furnished units targeting entry-level workers to unfurnished two-bedroom units. Monthly rents will start at about $1,200.

“Interest in both office and retail has been strong and the demand for residential has been unprecedented,” he says. A mid-2022 opening is expected.

Grubb’s first adaptive reuse project was Dock 1053 across the street from the Iron Works at the intersection of Atlantic Avenue and Whitaker Mill Road. The property, which Grubb acquired in 2014, was built in 1955 as a distribution center for the Great Atlantic & Pacific Tea Co., or A&P. Sam Crutchfield, Grubb Ventures’ director of commercial leasing and acquisitions, talked his boss into checking out the property, which had a leaky roof and lots of graffiti.

“We had done the Oaks at Fallon Park [a residential infill project with homes from the high $600s to $1 million], between Five Points and this Whitaker Mill/Atlantic Avenue intersection, so we had worked our way down close to here,” Grubb says.

Dock 1053 now houses a variety of retail and office tenants including Lynnwood Brewing Concern and the Hummingbird restaurant.

Growing up, not out

“The traction at Dock 1053 is what made us ultimately decide to expand in that area,” Grubb says. “It’s just so convenient to downtown and we’re seeing all of these nodes that are close to downtown starting to prosper. The whole Triangle is growing like I’ve never seen before.”

Nearby Wake Forest Road is a development hotspot with a Wegmans supermarket and Charlotte-based Spectrum Co.’s 33-acre Northside Center project, which is considering buildings as tall as 20 stories encompassing 2,000 residential units and 1.5 million square feet of office space.

Then there’s the East End Market proposed by SLI Capital principals Bryan Kane and Atlas Stark. It has received City Council approval for an 11-story building next to Dock 1053.

“I like to see Raleigh growing up instead of out,” Grubb says, adding that a second phase at the Iron Works projects a 7-story building. A pedestrian bridge is under review to connect the new development and Dock 1053. Grubb is working with the city to expand the greenway up to the Iron Works and find ways to make Atlantic Avenue more pedestrian-friendly.

The Iron Works will include options for shared work spaces that Grubb expects to become more popular as the pandemic eases. Demand remains high for the shared work space community at Dock 1053.

Traffic congestion, pedestrian accessibility and housing affordability still concern Grubb. “Raleigh is behind on infrastructure,” he says. “We have to think more about transit and light rail options.”

Two rail lines are located near the Iron Works including a line paralleling Atlantic Avenue and Wake Forest Road that is mentioned as a potential state-organized commuter rail line.

“The growth is coming whether we want it to or not,” Grubb says. “As a developer, I generally welcome growth, but we need to be smart about it; we have to move faster and think bolder.”