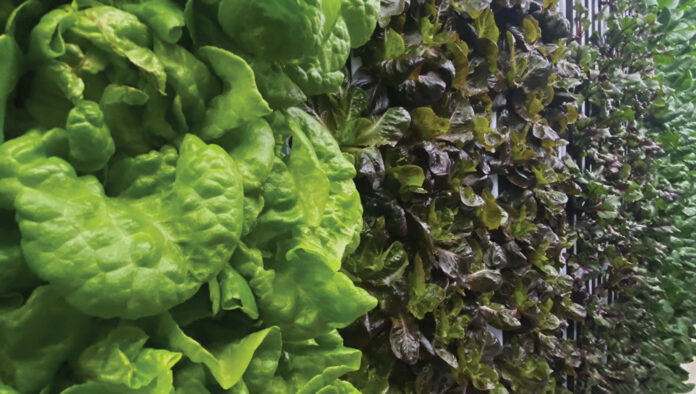 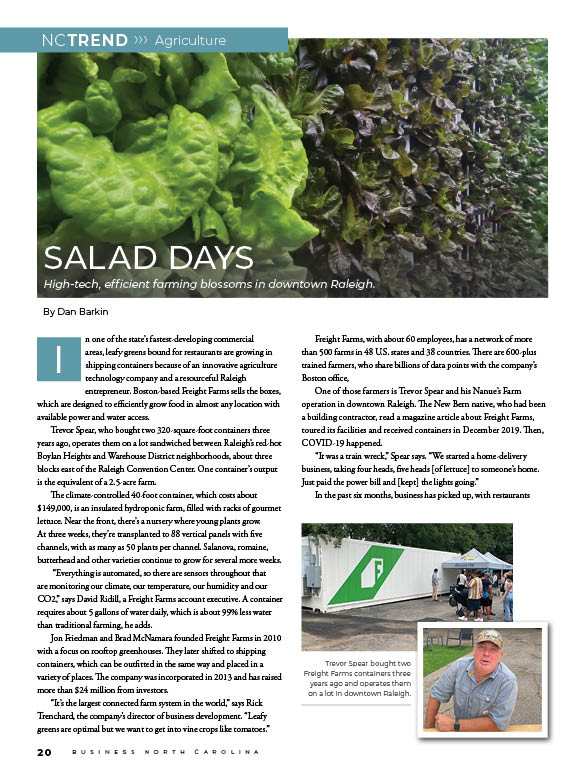 In one of the state’s fastest-developing commercial areas, leafy greens bound for restaurants are growing in shipping containers because of an innovative agriculture technology company and a resourceful Raleigh entrepreneur. Boston-based Freight Farms sells the boxes, which are designed to efficiently grow food in almost any location with available power and water access.

Trevor Spear, who bought two 320-square-foot containers three years ago, operates them on a lot sandwiched between Raleigh’s red-hot Boylan Heights and Warehouse District neighborhoods, about three blocks east of the Raleigh Convention Center. One container’s output is the equivalent of a 2.5-acre farm.

The climate-controlled 40-foot container, which costs about $149,000, is an insulated hydroponic farm, filled with racks of gourmet lettuce. Near the front, there’s a nursery where young plants grow. At three weeks, they’re transplanted to 88 vertical panels with five channels, with as many as 50 plants per channel. Salanova, romaine, butterhead and other varieties continue to grow for several more weeks.

“Everything is automated, so there are sensors throughout that are monitoring our climate, our temperature, our humidity and our CO2,” says David Ridill, a Freight Farms account executive. A container requires about 5 gallons of water daily, which is about 99% less water than traditional farming, he adds.

Jon Friedman and Brad McNamara founded Freight Farms in 2010 with a focus on rooftop greenhouses. They later shifted to shipping containers, which can be outfitted in the same way and placed in a variety of places. The company was incorporated in 2013 and has raised more than $24 million from investors.

“It’s the largest connected farm system in the world,” says Rick Trenchard, the company’s director of business development. “Leafy greens are optimal but we want to get into vine crops like tomatoes.”

Freight Farms, with about 60 employees, has a network of more than 500 farms in 48 U.S. states and 38 countries. There are 600-plus trained farmers, who share billions of data points with the company’s Boston office,

One of those farmers is Trevor Spear and his Nanue’s Farm operation in downtown Raleigh. The New Bern native, who had been a building contractor, read a magazine article about Freight Farms, toured its facilities and received containers in December 2019. Then, COVID-19 happened.

“It was a train wreck,” Spear says. “We started a home-delivery business, taking four heads, five heads [of lettuce] to someone’s home. Just paid the power bill and [kept] the lights going.”

In the past six months, business has picked up, with restaurants buying locally sourced produce. With the support of his son Brayton Spear, who helps with operations, the business is selling about 400 heads of lettuce a week. Spear predicts business will double in the next six months. Nanue’s Farm, which is named after his grandmother’s nickname, is starting to be profitable, Spear says. “We can grow 1,000 heads a week. Those two containers can grow 500 heads each.”

“The lettuce is really high-end. It’s a little pricey,” says Spear. “But we grow obscure varieties you can’t get anywhere else, by design.” And it is freshly harvested. “It literally is farm to table in hours.”

“Basically, what we’re seeing is this continued evolution of controlled-atmosphere production,” says Ron Fish, assistant director for agribusiness development for the N.C. Department of Agriculture and Consumer Services. Some enterprises are essentially large-scale, high-tech greenhouse operations. Another direction is the smaller footprint containerized model, which began emerging more than a decade ago.

The container model can work, says Fish. “If you’re first in the area, you can lock up enough high-end restaurants within five or six blocks of where you are. Then, it becomes a very good model.” ■