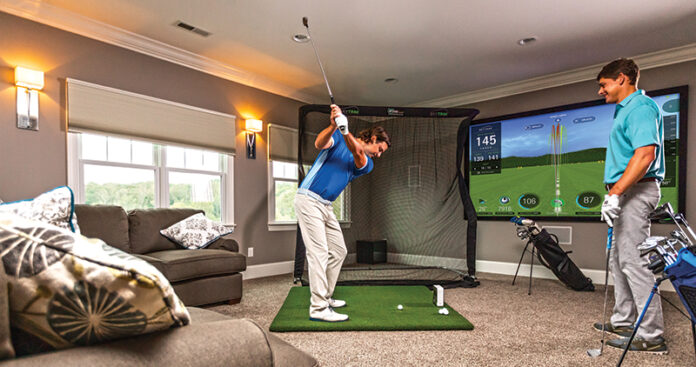 If calling a global pandemic “a tipping point” for your business sounds a bit antithetical, well, sometimes you have to take breaks when you get them. Particularly after you’ve spent decades battling to carve out space in a niche market.

For Winston-Salem-based SportTrak, that field is golf technology. Originally known as AccuSport International, the company spent more than 20 years producing the AccuShot Range System and later the Vector Launch Monitor line, which tracked the flight and distance of a golf ball hit from a tee. “I like to tell people AccuShot was Topgolf before there was Topgolf,” says SportTrak President Don Thorup, referring to the Dallas-based company that operates more than 50 sites featuring golf driving ranges, simulators and lots of partying.

While AccuShot delivered in many ways, it was expensive. Only major golf products companies and top teaching professionals were shelling out tens of thousands of dollars for the custom product.

In 2014, AccuSport shifted gears. Teaming up with golfing technology company SkyGolf and rebranding as SportTrak, its inaugural device, the SkyTrak Launch Monitor, was a less expensive option than its predecessors. The device sits on the floor and connects through wifi to phones and computers; golfers can work on their swing in small spaces and get instant shot analysis and ball-flight data for about $2,000. The company began garnering industry recognition and enthusiastic user feedback, including a 2017 award from Golf Digest magazine.

“We wanted a product that a consumer could afford but would stand up to professional use in terms of the data,” Thorup says.

When the COVID-19 pandemic led to closures and quarantines, golf emerged as one of the few viable options for recreation and socializing. Desperate for activities to keep their families entertained, people discovered that setting up an in-home golf experience was not as complicated or as expensive as in the past.

“I think (the pandemic) kind of crested the awareness factor,” Thorup says. “Whether it was the same kind of effect with Peloton or gardening or home improvement, people became more aware of what was possible. And one of those possibilities was to play real golf at home.”

SportTrak benefited as retail sales of sports and fitness equipment increased by 23% in the first half of 2021, compared with the same prepandemic period in 2019, according to researcher NPD Group.

A surreal time became golf’s “year of resurgence,” according to the National Golf Foundation, which reported 24.8 million golfers in the U.S. in 2020. That was a 2% increase from the previous year, the largest net gain in 17 years.

SportTrak’s momentum dovetailed with golf’s surge in popularity. Thorup says SportTrak’s sales were up 35% to 40% in 2020 over 2019. “And we’re on pace to do that again,” he says. “2021 is running between 55% and 60% over 2020. What’s interesting is even as things have opened up, our business just continues to grow.” SportTrak partnered with several trusted golf simulation companies. Customers can enjoy playing renowned golf courses such as Pebble Beach or Pinehurst from the comforts of their own home.

“We have a very flexible footprint,” Thorup says. “If a player wants to install this in their garage and have a net and a mat and an iPad or their phone, that’s fine. … But if they want to dedicate space in their home to have an enclosure or projector, some other amenities, a putting green, they can dress it up as far as they want to go.”

SportTrak recently asked customers to submit photos of their SkyTrak home set-ups. “A guy in New York City has a blanket over a door frame in his apartment,” says Andy Allen, SportTrak’s managing director of golf. “Other guys were in Colorado, on their deck, with space heaters. And then there were these beautiful bonus rooms that are all decked out. As long as you have enough room to safely swing a golf club, you have enough room.”

“When it’s snowing, or cold, or raining, we can go in there and work,” he says. “It’s always 72 (degrees) in that room. Macy (Pate) said the SkyTrak is the reason why her wedge play has been so sharp. Because she can trust the numbers.”

Luebchow and his staff incorporate SkyTrak to provide actionable data during lessons, as well as for club fitting and member entertainment. Dozens of clubs across North Carolina, includng the Country Club of Asheville and Eagle Point Golf Club in Wilmington, offer the technology for members.

The company is owned by an equal partnership between Ridgeland, Miss.-based SkyHawke Technologies and SportTrak. SkyHawke owns SkyGolf, which makes a variety of products that help golfers determine distance and make better decisions.

Thorup has been involved in the business since 2005 after previously working as a strategic planning consultant in Winston-Salem and in various finance jobs. He notes that SkyTrak has had positive cash flow since the company revised its prices to attract broader interest.

Because of its recent success, he adds, the 40-employee enterprise is drawing interest from larger sports technology companies. ■