NC trend: Getting cold heats up 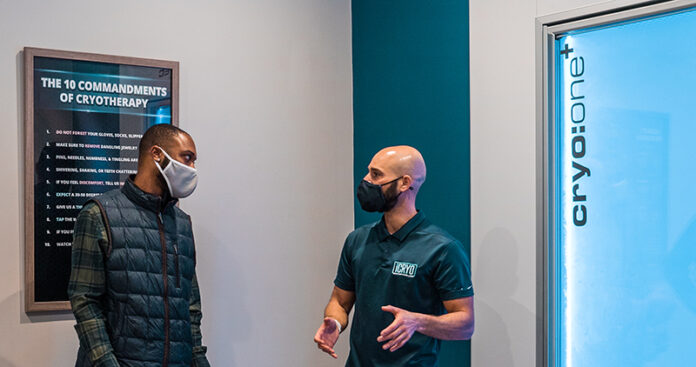 An age-old cold treatment heats up as cryotherapy centers proliferate.

The practice of harnessing cold for therapeutic purposes has been around for centuries, but a relatively new branch of alternative medicine called “cryotherapy” offers a modern twist. Submerging your body neck-down in subzero air is an increasingly popular way to reduce inflammation and body aches, prompting a surge of business interest in the trend.

Skeptics don’t buy the claims that it can help one lose weight, cope with stress or treat serious medical issues such as multiple sclerosis. Evidence of its efficacy is mixed, and the practice is not approved by the U.S. Food and Drug Administration, which cites the risk of frostbite, burns and adverse reactions.

Still, the popularity of cryotherapy is catapulting with the global market slated to grow by more than 9% annually between 2019 and 2024, reaching annual sales of $319 million, according to market research firm MarketsandMarkets.

Father-son duo Joseph and Matthew Pepe are spearheading the Triangle’s budding cryotherapy scene, signing on with Texas-based franchise operator iCRYO. They launched their first iCRYO location in Raleigh earlier this year, laying the foundation for several more across the region.

Joseph, a franchise industry veteran who lives in Connecticut, heard about cryotherapy from a friend. Coming off a 40-year career operating health and fitness centers on the East Coast, including more than 30 Planet Fitness locations in North Carolina and Connecticut, Pepe decided to enter a new venture with his son.

Passionate about sports medicine, Matthew was ready for something new after running his own business consulting firm since 2015. After earning a master’s degree in sports medicine from New Jersey’s Seton Hall University in 2008, he led enterprise sales and business development at a health technology startup. He then ran a site for STEM education franchise Zaniac in Cary while consulting companies on product development and strategy.

After scouting franchise opportunities for about six months, the Pepes signed a multi-unit franchise contract with iCRYO in August 2019 for the Triangle and other parts of the state. iCRYO offers a mix of services, from whole body cryotherapy to intravenous infusion and vitamin shots, infrared sauna sessions, facials, compression therapy and body sculpting. Its whole body service involves customers standing inside a chamber for two to three minutes surrounded by liquid nitrogen air with temperatures dropping to minus-140 degrees Fahrenheit. Customers buy day packages, monthly packages or memberships. Whole-body cryotherapy and other offerings such as the infrared sauna and compression therapy are about $29 per session.

Father-son co-founders Bill and Kyle Jones launched their first iCRYO retail location in League City, Texas, in 2015, seeding a franchise network that now includes more than 20 open or soon-to-open U.S. locations. That momentum landed iCRYO a ranking of No. 978 on last year’s Inc. 5000 list of the fastest-growing private companies. With a two-year growth rate of 377%, the company also scored the No. 30 spot on Inc.’s 2021 Texas Regional 5000 list. According to the most recent financial statements filed with the state of California, iCRYO generated $2.6 million in revenue in 2019, about triple the previous year. Net income was about $717,000.

iCRYO is one of several cryotherapy enterprises that share a similar franchise model and slate of services. Restore Hyper Wellness, which has more than 70 franchise locations nationwide including a few in Charlotte, generated a record $32 million in revenue last year. Icebox Cryotherapy Studios has eight locations in Georgia, Florida and New Jersey and six more coming soon to other states. The Triangle is also home to a few non-franchised cryotherapy businesses that offer similar services, such as Durham-based bR3 Wellness Studio and Raleigh’s CryoNC Boutique Wellness Center and Living Well Balanced.

In February, the Pepes debuted their first iCRYO venture in Raleigh’s North Hills district. Matthew handles the day-to-day operations, and Joseph advises from Connecticut. While they declined to share the specifics of their equity partner investment, Matthew says iCRYO’s current franchise fee is $45,000 per location, and the cost of construction, upfit, fixtures, furniture and equipment can range between $550,000 and $750,000 per location.

The Raleigh operation is surpassing initial projections, despite launching without iCRYO’s IV infusion service while Pepe works to secure a state license to administer the therapy. The space averages two consultations per day, with 90 membership passholders and about 400 customers through late April.

“Pain and inflammation are the two biggest things that everyone can relate to, whether you’re a weekend warrior athlete who gets sore after a flag football game, an elite athlete or a 65-year-old retiree with arthritis,” Matthew says. “But doing whole body cryotherapy on a regular basis will help manage that for you — it fleshes out inflammation from your joints and muscles and allows your body to release endorphins, which relieves you from pain for the next four to six hours.”

Customers are given a free consultation to gauge their pain levels; those who measure high on the main scale may need daily sessions before tapering to two or three times a week or when flare-ups occur. Though many active adults come in to manage their sore joints, other passholders who frequent the location are living with chronic conditions such as arthritis, lupus or fibromyalgia.

The Raleigh location has eight full- and part-time staff members, and Matthew says he’ll add a few registered part- and full-time nurses once the medical IV services are up and running.

The Pepes will launch their second location in Cary’s Waverly Place retail center in July. They recently secured the rights to build four more offices in Chapel Hill, Durham, Greensboro and a yet-to-be-determined Triangle city, along with two locations in Wilmington. A separate franchisee has rights to the Charlotte market with plans for an initial site in the SouthPark neighborhood.

“We lucked out with an opportunity to open here in the Triangle, and we’re opening before competitors come to the territory,” Matthew says. “We want to grow as organically but as quickly as possible in North Carolina.” Matthew says the location will soon offer proprietary formulas to pair with the IV infusion service as the company expands its “wellness” business segment.

“Cryotherapy will always be there because it’s such a dominant and easy-to-use modality for pain management, but we’re going to surround that with some really cool things that aren’t quite in the space yet, so that’s really what we’re excited about.” ■