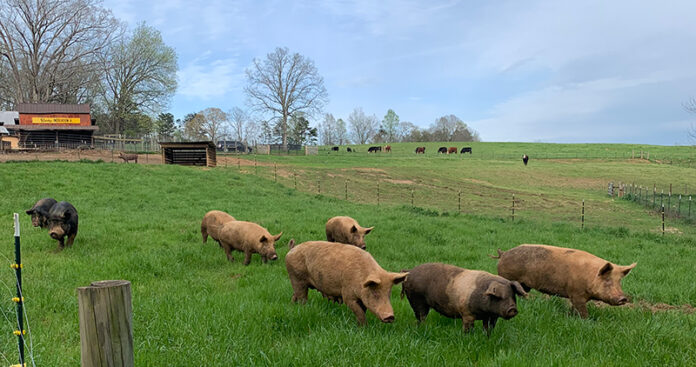 When Shelby native Tyler Jones had trouble sourcing his three small Charlotte area food stores with local dairy products, fresh produce and pasture-raised meats, he decided to buy a farm. The local food movement had gained traction, and the idea of moving back to the country appealed to him.

In 2015, Jones, 39, bought a 40-acre farm in Lincoln County for $4,000 an acre. He learned about the property through classified-ad site Craigslist.

First-generation farmers like Jones are popping up across North Carolina despite lots of barriers. They are developing ways to make farming sustainable through a variety of education, partnerships and activism. These modern-day farmers say their survival requires creative business models.

The 2017 U.S. Department of Agriculture census counted about 46,000 farms in North Carolina, of which about 75% are not owned by families with long-term access to land and equipment. A third of new farmers lease land because rising property values makes ownership difficult, according to a report last year by the National Young Farmers Coalition.

Jones sold his grocery markets and partnered with John “Johnny Ray” Bousselot of Mount Holly to form Honey Hog Restaurant Group in 2018. They have expanded to own 126 acres while leasing another 140 acres. They operate the Honey Hog and Nannie’s Fish Camp & Chicken Champ restaurants in Fallston, which is 10 miles north of Shelby in Cleveland County. Their third restaurant, The Hoot Nannie, is slated to open in Forest City in mid-June.

Honey Hog Farm’s hogs, Wagyu cows and chickens provide much of the meat on the restaurants’ menus, a farm-to-table strategy that Jones says is a key to the company’s success. “It’s important to put the farmer back on the sales floor,” he says. “The whole purpose of running our own farm and producing our hogs is to show that it can be done. We’re trying to inspire other farmers to link up with other restaurants or start their own. Why can’t a farmer be invested in his own restaurant?”

The Farmunist, Jones’ Instagram account, is filled with photos and videos to educate consumers and other farmers about how supporting local farmers elevates an entire community. In an April post, he shared how $500,000 in revenue last year from the Honey Hog restaurant sparked economic development. Half of the money returns to local farmers, and the other half provides for 63 restaurant employees. “We typically don’t talk about the finances of the restaurant, but in this case, it’s very important to understand the impact that one restaurant can have on its local farming community based on sales,” he says.

First-generation farmer Kamal Bell bought 12 acres in Orange County’s Cedar Grove area to establish Sankofa Farms in 2016. His financing included $70,000 borrowed over 30 years through a USDA program. The farm is one of 1,518 Black-owned farms in the state, according to a federal report. But nearly 40% of those farms produced annual revenue of less than $2,500 between 2012 and 2017.

Collard greens, kale, lettuce, mustard greens, okra, squash and watermelon grow on 5 acres at Sankofa Farms, while Bell, 30, raises bees in 40 hives and hosts classes on bees and making honey. He advertises his bees in the Teaching Responsible Apiary Practices program on Airbnb, typically charging $50 for a class.

Bell’s entry into farming stemmed from his frustration with food deserts, the term for areas that lack access to healthy and affordable food. “I got into farming because I wanted to make a change,” he says. “I wanted to get Black people healthy food.”

North Carolina has 353 census tracts, which are similar to the size of a neighborhood, fitting the USDA’s definition of low income and low access: at least 500 people, or a third of the population, live more than one mile from the nearest supermarket or large grocery store in an urban area or more than 10 miles in a rural area.

Bell takes a different approach to selling his produce than most small N.C. farmers. Sankofa Farms distributes through Fed Up!, a food drive organized by three N.C. social justice groups to distribute locally grown fruits and vegetables in low-income neighborhoods. Those groups include the Poor People’s Campaign led by Goldsboro pastor and activist the Rev. William Barber.

Bell also partners with Root Causes, a Duke University Medical Center-sponsored program with a mission of “healing the food system” by making more fresh produce available to people of modest means.
“[Farmers markets] don’t get the food to the people who actually really need it,” Bell says. “It’s more of a system for people who can afford it and perpetuate inequality.”

He founded Sankofa Farms Agricultural Academy after he realized how people affected by food deserts didn’t know how to solve the problem. Seven students, ranging from elementary to high school age, are learning how to grow food and manage a farm with Bell on weekends and school breaks. They also study agriculture professions and issues.

Sankofites, as Bell calls his students, develop self-determination, cultural identity and the ability to solve problems within their communities and understand how larger systems work. “We could take this model to other places and it would be a benefit to farmers.”

Another resource for small N.C. farmers is Family Agriculture Resource Management Services, a Charlotte-based nonprofit group offering legal and technical services. Its founder is Jillian Hishaw, a lawyer who has distributed more than $100,000 from her group’s emergency fund to help first-generation farmers mostly in the Southeast. The money has helped farmers avoid foreclosures and paid for equipment repair and medical bills. Corporate donors have included Allstate Insurance, Clif Bar, Food Lion, New Belgium Brewing and Nucor.

The USDA has various projects that aid farmers including the Environmental Quality Incentives Program, which also provides funding for conservation and improved water and air quality, Hishaw says. “So many young farmers don’t realize there’s a lot of USDA programming that [one] can take advantage of regarding fencing, digging a well, or acquiring a hoop house [greenhouse made with poles and plastic roof].” ■