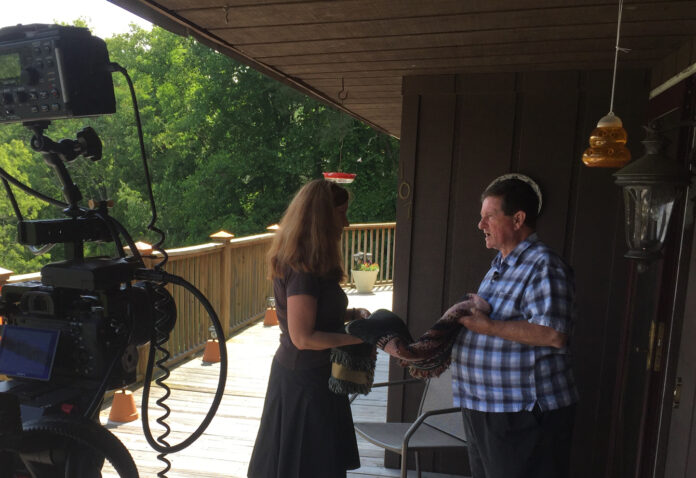 In the predawn of a September 2003 morning, a ruddy glow above the trees awakened Jerry Pope at his Swannanoa home. “Wake up! Beacon’s on fire!” he yelled at his wife. Rebecca Williams jumps to her feet and they walk down the street near their home to where flames boil skyward.

Fire consumed the five-story, shopping mall-sized factory, once the nation’s largest blanket mill with as many as 2,200 employees. Scores of onlookers watched with them as 400 firefighters struggled vainly to control the blaze.

Local Fire Chief Anthony Penland says he’d told his men, “If that thing ever catches fire, it’s just going to have to burn.” Inside, vast expanses of thick, oak floors had been routinely soaked in oil for eight decades to hold down potentially explosive wool and cotton lint.

Later that morning, Beacon Manufacturing in Swannanoa was reduced to rubble, torched by a teenage arsonist. The real impact sank in a few days later.

“It had become a pilgrimage site,” Williams says. “You saw old guys in pickup trucks sitting a block away, crying.”

The fire was anticlimactic, in a way. Charles Dexter Owen II had moved the business to North Carolina from New Bedford, Massachusetts, in 1925. The plant completed in 1936 had shut down in 2002, many years after the Owen family sold the company.

Still, it was more than just another of the 300-plus N.C. textile mills to die.

“Beacon was a way of life,” says Williams, an oral historian and documentary filmmaker who moved to Swannanoa in 1999. “These were not just jobs. People hoped Beacon would come back, but this was finality. Beacon was not coming back.”

It took Williams most of a decade and $70,000, much of it from grants from the N.C. Humanities Council and N.C. Arts Council. But earlier this year she finally completed Blanket Town, her story of Beacon Manufacturing. It screened at the Longleaf Film Festival at Raleigh’s North Carolina Museum of History in May. She hopes it airs on public television and at museums and schools in coming months.

The film has input from more than 90 former mill workers, Owen family heirs and modern sources, such as historian Bill Alexander, whose family moved to the Swannanoa Valley in the 1780s. It chronicles an era when looms and shuttles were today’s pixels and bandwidth.

Swannanoa ranked with Kannapolis, a Cabarrus County town once literally owned by towel-maker Cannon Mills, as an iconic North Carolina company village. “[Charles Owen II] loaded bricks from the family’s factory in Massachusetts on train cars and brought them to Swannanoa,” says Alexander, whose family was among the area’s first white settlers, nearly 150 years before the plant came to Swannanoa in the 1920s.

By the mid-1930s, in the heart of the Great Depression, the mill covered 1 million square feet and employed 2,200 people.

“Without Beacon, Swannanoa would have remained just a very small village,” Alexander adds. Today it has nearly 5,000 residents and is home to Warren Wilson College.

In Blanket Town, Williams relies on dozens of former millworkers and sources such as the Swannanoa Valley Museum and History Center. What emerges, often with black-and-white starkness, are massive rows of looms, annual picnics attended by hundreds, textile-league baseball and women’s basketball teams.

The mill usually ran three work shifts around the clock. That generated a critical mass that led to 24-hour grocery stores and cafes, several doctors and other accommodations.

“That’s why they moved here, and Beacon, unlike Cannon Mills, was never unionized,” Williams says. “Members of the family were always on the grounds and had a famous open-door policy. If you had a problem in your personal life or an idea, the door was always open.”

Critics deride that as paternalism, a view that Williams shares. Beacon paid wages and had benefits comparable to those of union members, but, she adds, “It was also a way of controlling people.”

Also, much of Beacon’s growth was in the Jim Crow era of workplace racism. Though it hired Black people, like other Tar Heel textile mills, it paid them lower wages and often assigned them dangerous or dead-end jobs, Williams says. They lived in segregated mill villages.

The Owen family started a competing blanket business a mile and a half from Beacon in the mid-1970s. It outlasted Beacon and was acquired by Springs Global of Fort Mill, South Carolina, in 2003. Today, only a few isolated steps to nowhere, unburned, remain on the weedy vacant lot where Beacon once stood. Blanket Town, though, finds its mark.

“It was a product of its culture and times,” says Williams. “It was an incredibly tight-knit community. I wanted to show why that building meant so much to so many people.”

A former employee, Betty Babb, in her 90s, describes her feelings in a cracking voice in the film. “I’d gladly go back there today if I could,” she says. “I’d take a few days off, but then I’d go back.” ■