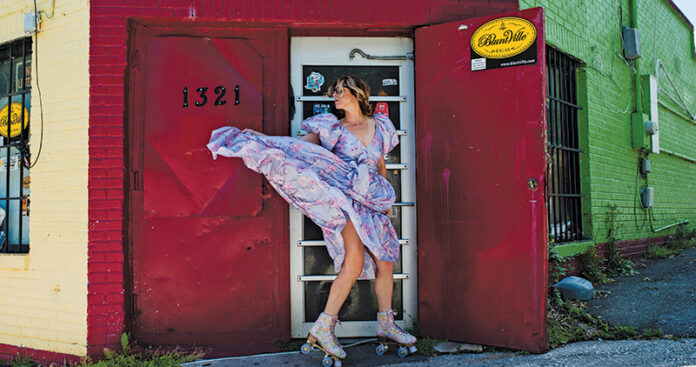 Setting trends in the $1.9 trillion global fashion industry has long been portrayed as an exclusive club only for the rich or famous. But with the birth of social media, the industry has become more accessible to the public. Rather than runway shows and the glossy pages of high-fashion magazines, the latest trends can be accessed simply by scrolling through any social media platform.

As the fashion industry continues to evolve, so does the way apparel is marketed to potential consumers. More than 1 billion people use Instagram each month, with 130 million users tapping on shopping posts each month, according to a study by social media management platform Hootsuite. About 50% of people have visited a website to make a purchase after seeing a product or service on Instagram. Global retail sales of apparel and footwear are expected to grow to more than $3 trillion by 2030, according to a report by Statista.

Influencer marketing has changed the landscape of advertising. While the phenomenon is nothing new — the rich and famous have influenced trends for centuries — the rise of social media caused a renaissance. Now, it’s not just celebrities but normal folks, or “niche influencers,” that brands seek out. North Carolina stylist and fashion influencers such as Raleigh’s Marche Robinson (@marcherobinson) and Charlotte’s Rachel Brown (@queencitychic) and Jan Correll (@silver_isthenewblonde) have turned to social media to build major followings.

Charlotte-based professional fashion stylist Kristin Heinrich says social media is not only a free source for marketing but also inspiration.

“One hundred percent of my business is run or fed through Instagram,” says Heinrich, who has never paid for advertisements outside a website domain.

A Richmond, Va., native, Heinrich focuses on the personal side of fashion styling. Her services run the gamut from cleaning out clients’ closets to packing their suitcases to dressing them for important events. One of her more popular services is personal shopping. “I basically spend my day spending other people’s money, so it’s really fun.”

Heinrich has worked retail jobs all her life but really got into the fashion world through an unexpected door — stock-car racing. She worked as four-time NASCAR Cup Series Champion Jeff Gordon’s personal assistant for four years, and one of her responsibilities was to select his outfits. After Gordon moved to New York, she started Kristin Heinrich Concierge Services to help other NASCAR drivers, including styling their wardrobes. While male race car drivers helped launch her business, it was their wives and girlfriends who inspired her to shift to personal shopping in 2009.

Twelve years later, she has about 20 clients nationally and has styled people for TV appearances on shows such as Good Morning America, Jimmy Kimmel Live and The Today Show. Her work has been featured in national publications such as Sports Illustrated and USA Today, and her services include travel wardrobe prep, closet editing and reorganizing, custom fittings, special events and personal shopping. While Heinrich didn’t disclose her rates because she says they vary depending on the client’s needs and preferences, she points out that a lot more people can afford a personal shopper than they might think.

“Personal styling is no different these days than hiring an interior designer or someone who colors and cuts your hair,” says Heinrich. “Certainly I can do that myself, but I don’t want to because someone can do it better than me.”

Like many, Charlotte fashion and wardrobe stylist Whitley Adkins fondly recalls playing dress-up as some of her earliest memories, wobbling around in oversized heels and flashy costume jewelry. A nascent passion has turned into a successful plunge into the fashion industry.

Adkins, 44, divides her time among commercial, personal and editorial styling, building a large social media presence as Queen City Style. More than 11,000 people follow her adventures in fashion on Instagram.

Ten years ago, Adkins was a stay-at-home mother to her two sons, Hank and Worth. “It was great, but I wasn’t completely fulfilled personally,” Adkins says.

The UNC Chapel Hill grad, who has a degree in communication studies, began throwing herself into all things creative, from redecorating her house every five days to planning elaborate dinners. She drew much of her taste from her grandmother and great-grandmother, who were both stylists and buyers for Rosenbloom-Levy, an upscale boutique in Rocky Mount. When Adkins saw that the back page of Lucky magazine was featuring blog-style spreads of people’s fashionable mothers, she submitted a glamorous photo of her family’s chic matriarchs to the Condé Nast media-owned publication.

“That was the catalyst for what would become the Queen City Style, which basically was a fashion blog or a journal for all of these creative things I was doing at home,” Adkins says.

Her newfound online presence landed her gigs writing monthly columns for Charlotte Parent Magazine (which also advertised her blog), serving as style editor for SouthPark Magazine, dressing the city’s “smart, hardworking and well-mannered,” as Adkins describes her clients, and, more recently, directing Greensboro-based national retailer Marie Oliver’s spring and summer lines. Throughout her company’s evolution, Adkins has done her own marketing and PR and has even served as her own model.

With thousands of Instagram followers, Adkins attributes her large base to “a lot of hard work over time” and her “relationship-oriented” approach to business.

“I’ve never pursued being an influencer from a business standpoint,” Adkins says. “For me, it was a creative outlet. It is a thing that allows my soul to feel full. But it is also a marketing and PR tool that doesn’t cost me any money.” ■