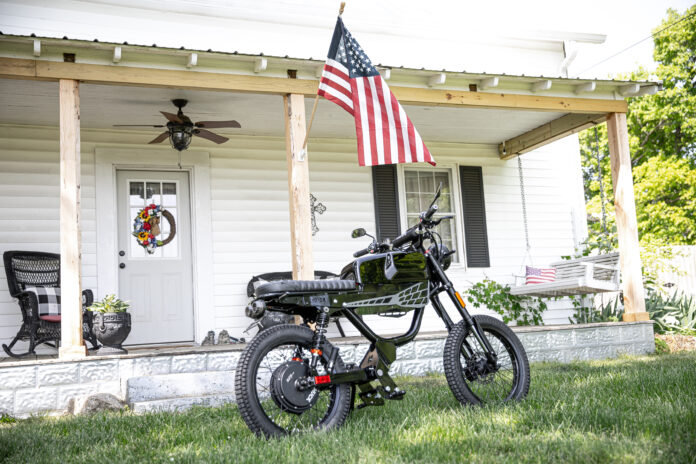 Brett McCoy has nice memories of growing up in western New York state, especially Saturday mornings. He’d ride into town with his grandfather Harold McCoy, a farmer who grew grapes for local wineries. Grandpa would pick out the auto parts he needed at the local NAPA store while little Brett danced along the aisles.

“They (the store owners) knew (Grandpa) was coming, and had the coffee waiting for him,” says McCoy. “They’d let me roam around, feed me candy. … Sometimes Grandpa forgot his wallet and they let him pay the next time. It was just a neat experience — real small-town America.”

A few years later and a few miles south, the desire to reproduce that feeling is the driving force behind Huck Cycles, McCoy’s 3-year-old electric motorbike company that’s based in Cornelius, just north of Charlotte.

Huck is designed to be a small business, selling a limited number of hand-built, battery-powered vehicles for a slice of the growing “micro-mobility” market that includes bikes
and scooters.

Huck machines start at about $5,200. Most of them — the company has sold nearly 1,000 in 40 states and six countries so far — have been ridden by McCoy, Huck’s CEO and founder. He’s also spoken with the vast majority of his customers.

While a total newcomer to the biking industry, McCoy picked a red-hot sector to invest his time and money in. Sales of micro-mobility products are expected to soar to more than $200 billion annually by 2030, up from $44 billion in 2020, according to Allied Market Research, a Portland, Oregon-based data service.

Huck’s 15-person staff consists primarily of U.S. veterans (like McCoy), and the company is working to find North American suppliers for each of the 200 or so components for each bike. North Carolina suppliers are preferred. Currently, frames are made in Statesville, seats in High Point, and plastic “fuel” tanks in Salisbury.

Heck, the company is even named after Huck Finn.

“I don’t know, I just wanted to keep that piece of America, that vintage feel” from his childhood, says McCoy. “That’s really important to me.”

McCoy knows a lot about two-wheel vehicles. His parents owned only motorcycles — no cars  — so he rode from age 6 until many years later when life changes put a damper on his biker life.

He talked his wife into letting him buy an electric bike several
years ago — a “loophole,” he calls it — but was disappointed with the options available on the market.

So despite no experience in fabrication, electrical engineering, or vehicle design, McCoy created his own. He built prototypes out of cardboard and then PVC pipe purchased from a local home improvement store.

It’s a very different pursuit from his long marketing career at various employers in the Buffalo, Cleveland and Charlotte areas. He’s been in North Carolina off and on since 2003, including stints at Lowe’s Cos. and, most recently, Wells Fargo.

McCoy documented his quest to create a better bike on social media. To his surprise, that generated offers to buy one if he got it done, and, as work progressed, a few unsolicited checks.

But good old American perseverance won the day. McCoy burned the midnight oil while also burning through much of his savings. He turned off the sales button on the company website more than once because his band of veterans couldn’t keep up with demand. But the orders kept coming. Problems were overcome. The company generated enough income — and promise — for him to quit his day job in March 2021.

In December 2021, Clairvoyant Ventures of Charlotte invested $1 million. That first outside investment allowed Huck to expand its workforce and purchase enough inventory to weather some supply chain bumps. It will also facilitate a move into a new space with more than 15,000 square feet near Charlotte Douglas International Airport later this year.

That should lead to a tripling of production, from 50 to 60 cycles a month now to 150. McCoy doesn’t want to get much bigger than that because the dynamic of the business would change. “We’re made in the U.S., by hand, by real people,” he says. “If we changed what we’re doing, we’d lose that. … I don’t want to get too big.”

“This is not a toy,” says Amedio. “It’s a serious product in a fast-growing part of the transportation space, especially in urban areas. It’s already a big thing in Europe, and it’s taking off in cities across America.”

Amedio says he and his fellow investors were not daunted by McCoy’s insistence on an American-made product, though it raises the cost of Huck cycles by 30-40%.

“The quality will be better, and there is support for that idea,” Amedio says. “Consumers are willing to grant some leeway for an American-made product. And then that is who they are. That’s Brett’s vision.”

Huck Cycles fit a space somewhere between scooters, mopeds and actual motorcycles. The heaviest Huck is 160 pounds, a third as much as a lightweight motorcycle.

They are classified as mopeds in some states and as motorcycles in others. Huck’s cycles come with a vehicle identification number to match the classification of the state of delivery.

“Our customers, for the most part, are not motorcycle people,” says McCoy. “They have not been in the market for a motorcycle but have aspired to be. So we scratch that itch.” ■