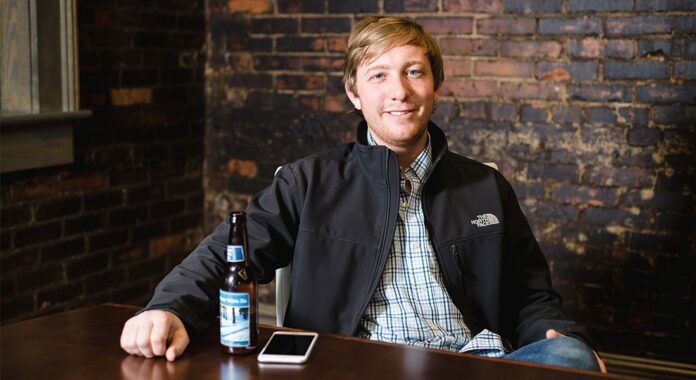 While the inspiration for Next Glass came from a $90 bottle of wine, it’s the humble workman’s friend that is propelling the company’s growth. The Wilmington startup is shifting its focus from wine to beer after its acquisition of Untappd, an app that combines social media and e-commerce to create a community of beer drinkers and businesses.

Next Glass was started in 2012 by a group led by CEO Kurt Taylor, who got the idea for the business after being disappointed with a pricey wine chosen by a restaurant sommelier. Working as an analyst for Charlotte-based investment bank Fennebresque & Co., he decided to start his own company, and with the help of his father, George Taylor, the company’s chairman, he secured financing from about 50 investors. The app’s software uses science and algorithms to provide wine and beer recommendations based on the chemistry of taste. The Next Glass app launched in November 2014 and got half a million downloads in the first month.

Taylor, 27, doesn’t disclose financial terms of the January 2016 merger with California-based Untappd, which has more than 4 million users, but says the acquisition was part of Next Glass’ strategy of expanding its customer base with an eye toward building new revenue streams. Beer is a $252 billion industry, according to the Washington, D.C.-based Beer Institute, a trade group. In North Carolina alone, the industry accounts for $7 billion in total economic impact and supports more than 47,000 jobs. Daniel Hartis, digital manager at All About Beer magazine in Durham, says the Untappd app taps into the culture of “beer ticking” by helping users create lists of beers they want to try and providing a way to track their progress.

“Beer culture in general likes to share what they’re drinking,” Hartis says, and Untappd helps build that community. The app rewards users with badges for achievements such as trying different beer styles or drinking beers from various locations or countries.

After the merger, the company unveiled a new product, Untappd for Business, which allows brewers, bottle shops and bars exclusive access to the app’s users within local markets. More than 3,000 clients have purchased Untappd for Business. For $599 a year, subscribers gain access to software to create beer menus and promotions aimed at driving customers through their doors.

Untappd for Business clients include New Belgium Brewing, Total Wine & More and Whole Foods Markets, as well as smaller businesses such as Beer Noggin, a craft-beer bottle shop and taproom in Bronxville, N.Y. Total Wine’s sales have increased because of the app, according to John Jordan, senior vice president, though the company declined to release specifics. Doug Cedrone, co-owner of Beer Noggin, says the app allows him to better connect with his customers.

“The push notification feature is one of our favorites,” he says. “Our clientele love the ability to immediately see any updates to our menus or events, and many have told us that they solely rely on the app features to do so.”

With about 50 employees, Next Glass has come a long way since a bad bottle of wine set Taylor on the path. He often digs out the memo he wrote to potential investors.

“It is closer to the original plan than I expected,” Taylor says. “The path in which we got there is very different, though.”

KINSTON — The Little Bank will acquire Oxford-based Union Banc in an all-stock deal valued at $30.7 million. The combined bank will be based in Greenville and will operate as Union Bank. It will have 15 branches and assets of about $665 million. Rob Jones, chief executive officer of The Little Bank, will be CEO. The deal is expected to close in the second quarter.

WILMINGTON — Hans Bean was named vice president of trade development of North Carolina Ports. The Southport native has worked in the maritime industry for more than 20 years, most recently as senior director of commercial sales and marketing for the North American division of Netherlands-based port operator APM Terminals.

WILMINGTON — The Wall Street Journal reported that Pharmaceutical Product Development has hired Goldman Sachs Group, JPMorgan Chase and Centerview Partners to help it find a buyer. The contract-research organization founded by Fred Eshelman has been owned since 2011 by The Carlyle Group and Hellman & Friedman.