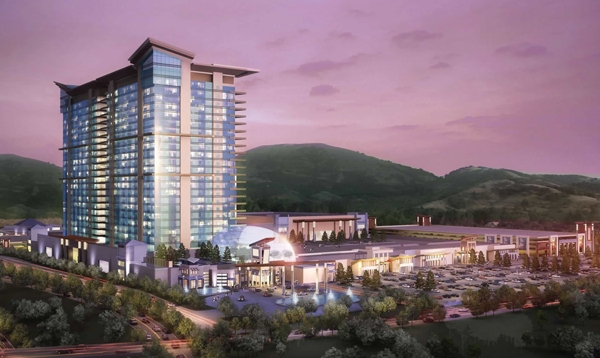 Years of dreaming about a casino may pay off for the Catawba Indian Nation. But the governor’s assent remains a dicey situation.

Some like the odds for a new $300 million casino that promises to light up Cleveland County’s economy. “That horse has left the barn,” says an exultant Kings Mountain Mayor Scott Neisler, whose town stands to gain millions in economic development from the Catawba Indian Nation-sponsored project, which broke ground in July. Catawba Chief Bill Harris calls it a step “toward more prosperity, increased opportunities and a renewed bond between the Catawba Nation” and North Carolina.

Site preparation is underway on an 18-acre tract on Interstate 85, six miles from the South Carolina state line. But a few more hands need to be played before the casino starts producing the expected economic impact of more than $370 million annually.

The Catawbas’ plans call for the full monty of gaming at a nearly two-acre structure hosting more than 50 table games, 1,800 video gaming machines, a 900-seat restaurant and other features. It would be a big economic boost for the tribe, which has a 1,000-acre reservation in York County, S.C., that includes fewer than 500 households, many of which have incomes below the poverty line. Its project partners include Greenville, S.C., investor Wallace Cheves, a 25-year veteran of casino and internet-gaming deals, and Buffalo, N.Y.-based Delaware North, a privately held, $3 billion food service and hospitality business.

Stacked against them is the potential opposition of Gov. Roy Cooper, who must approve a pivotal compact. He spoke out against the casino during his 2016 gubernatorial campaign, and spokesman Ford Porter says Cooper and the Catawbas have not negotiated terms of the types of gaming permitted at the casino or the state’s share of proceeds.

Meanwhile, the Eastern Band of Cherokee Indians, which operates thriving casinos in Cherokee and Murphy, in partnership with Caesars Entertainment’s Harrah’s brand, are engaging in modern-day warfare against the Catawbas. The Cherokees are suing in federal court to block the Catawba project, arguing the site is on their historical land and should have gone to another tribe. They are also flooding mailboxes in North Carolina with direct-mail pieces attacking the project, citing past controversies involving Cheves, who has given about $500,000 to political campaigns affiliated with President Donald Trump and other Republican politicians over the last two years.

Neisler, Harris and other proponents insist that the massive profits of the Harrah’s Cherokee casinos allow that tribe to buttress cultural education such as the Cherokee language, improve health care and ease poverty. Cherokee profits are split, half to tribal government, half to its roughly 13,000 members, who often receive payouts topping $10,000 annually.

Such largess has made gambling attractive to scores of Native American tribes. More than 450 American Indian-controlled casinos operate across the U.S., though there are no full-scale operations in North Carolina’s neighboring states of South Carolina, Tennessee and Virginia. The casinos nationally employ more than 700,000 people and generate more than $37 billion annually.

The Catawbas have tried twice to operate gaming businesses limited to bingo, but they eventually shut down both efforts, the last in 2017. Harris blames low profit margins, low stakes and limited excitement compared with the Las Vegas-style, “Class III” gambling portrayed on countless movies and TV shows. Both Carolinas also have started state lotteries that siphoned potential customers away from the bingo parlors, he says.

Under federal law, tribal gaming “compacts” must be hammered out between tribes and the governor in whose state they operate, if games go beyond Class II — bingo. “Compacts cover areas including the level of gaming and the state’s financial share,” Porter says.

Cooper would then have to submit the compact for approval to the federal Bureau of Indian Affairs in Washington, D.C. One of his predecessors, Gov. Jim Hunt, in the 1990s refused to sign the Cherokee compact. Federal courts eventually cleared the way for the Cherokees to open their first casino in 1997.

The Catawbas filed a casino app 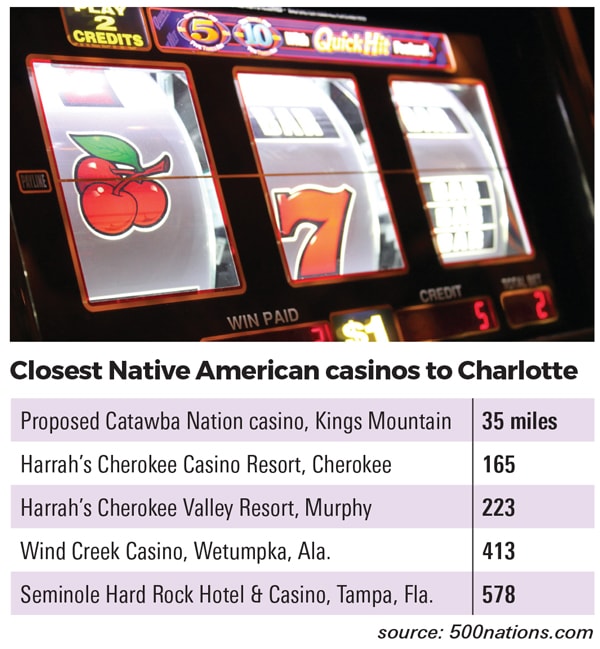 lication in 2013 with the bureau, which didn’t act on the request. So last year, U.S. Sen. Lindsey Graham of South Carolina sponsored a bill that bypassed the agency and called for the federal government to acquire 17 acres dedicated for a casino to be held in trust for the Catawbas. Graham’s N.C. peers, Richard Burr and Thom Tillis, supported the measure. Though the bill didn’t pass, the bureau approved the Catawbas’ application in March.

That prompted a quick response from the Cherokees, who sued in April to block the deal in the U.S. District Court in Washington, D.C. Because of the pending litigation, Cooper hasn’t met with the Catawbas or signed the Class III contract, Porter says.

The casino will “right a historical wrong and create a brighter future for all of us,” Harris says. The Cherokees don’t agree, knowing that the new casino will be much more accessible to the 4 million people who live in the nearby Charlotte and Greenville-Spartanburg, S.C., metro areas. While Cherokee and Murphy are in lightly populated parts of western North Carolina, both are less than a three-hour drive from Atlanta.

Kings Mountain, population about 11,000, may have the most to gain. Neisler says the casino would employ about 4,000 people, drawing from a wide radius. That’s nearly double the total membership of the Catawba Nation.

The city is also banking on the casino and related development to bolster its joint venture project that provides natural gas and electricity to local businesses and consumers. The gas-powered plant puts about $2 million a year in the city’s general fund and offers lower rates than Duke Energy, the region’s dominant electric and gas utility.

“The casino could mean, for the next 20 years or so, our rates are going to be pretty flat, which is a great economic boost,” Neisler says. “We’re going to provide power, utilities and infrastructure not only for the casino but all the ancillary things that come with it, such as restaurants and shopping. In the next five years, it will double our electric sales.”

Neisler is confident the casino will open next summer. While the Catawba chief, Harris, has floated the idea of joining forces with the Cherokee, the chances of a peace treaty seem unlikely given the ill feelings that linger from centuries past.

In a statement, Cherokee Principal Chief Richard Sneed emphasizes his tribe’s view that the Catawbas are encroaching on their land. “No ribbon-cutting will change those facts or stop the courts from putting an end to this charade.” ■