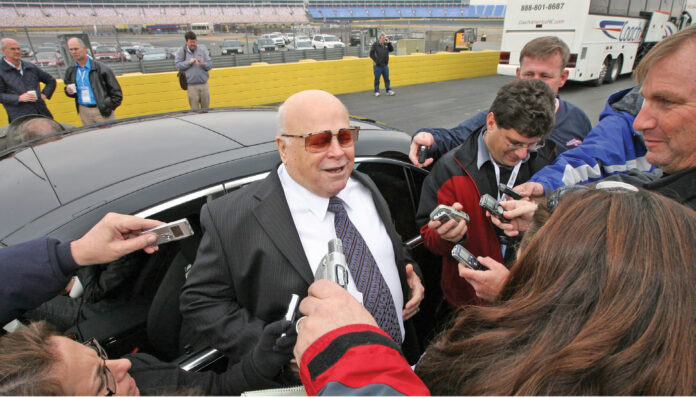 Bruton Smith died in June at 95, having helped make NASCAR a national sports phenomenon. “Never afraid to take a chance, Bruton will go down as one of the greatest promoters and innovators in the history of motor sports,” Charlotte auto dealer and racing industry icon Rick Hendrick said.

Smith’s flamboyant business style made him an unforgettable force in North Carolina for generations. Business North Carolina had a blast writing about him over the years. Perhaps the most powerful story was Ed Martin’s August 2013 feature, “Car Czar: Age hasn’t mellowed Bruton Smith. He still musters bluster at age 86.”

The cover graphic was an unappealing drawing of Smith holding a sandwich board sign reading, “Vegas or Bust.” The story focused on Smith’s threat in May 2013 to move a NASCAR race from Charlotte Motor Speedway to his new track in Las Vegas, where city leaders dangled big incentives as a carrot.

That story came as Smith feuded with the France family, which has long controlled the NASCAR circuit’s schedule, and Cabarrus County officials, whose actions prompted his threat to move the track elsewhere. “He’s just bluster on that one,” longtime speedway president Humpy Wheeler told Martin. “Bruton is kind of an oligarch who doesn’t like people to say no to him.”

While Smith didn’t talk for that story, his longtime lawyer Bill Diehl provided BNC with juicy content. Asked why Smith didn’t tell Wheeler an office was being built for Smith’s son, Diehl said, “I’d take anything Humpy says with a large grain of salt. If they have anything good to say about each other at this point, I don’t know about that.”

At times, a lot of people didn’t have good things to say about Smith. His purchases of stock from minority investors in Charlotte Motor Speedway, a bitter takeover battle for Albemarle-based North Carolina Federal Savings and Loan and other disputes sparked negative reviews. He was inducted into Charlotte’s NASCAR Hall of Fame in 2016, while Bill France Sr. and Bill France Jr. were in the inaugural class six years earlier.

But Smith’s death prompted widespread appreciation of his career building two major businesses, Speedway Motorsports and Sonic Automotive, now both led by his sons. His rise from modest roots in Stanly County to periodic rankings on Forbes’ list of the 400 richest Americans was an unpredictable, remarkable story.

Famous racer Darrell Waltrip summed it up: “When I think about Bruton Smith I can’t help but think about the song, ‘I Did It My Way.’ Boy did he ever!” ■