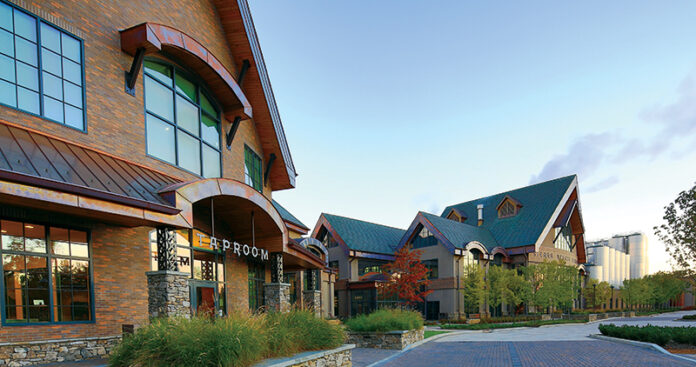 Brewing beer is part art, part science. Malt, water, hops, yeast and skill are the basic ingredients needed to create any batch. North Carolina is a big national industry force with more than 320 breweries and brewpubs across the state and a $2.8 billion economic impact.

While beer is an important part of North Carolina’s identity, tackling climate change issues also has become a crucial mission. The administration of Gov. Roy Cooper created a Clean Energy Plan that aims to reduce the electric power sector’s greenhouse gas emissions by 70% below 2005 levels by 2030 and attain carbon neutrality by 2050. Industries such as agriculture and manufacturing are increasingly emphasizing environmentally friendly practices. Tar Heel brewers have followed suit, finding innovative ways to bolster their green thumbs and decrease their carbon footprint.

“There are lots of small, incremental things we try to do throughout the whole process to minimize the impact of the three main resources that go into beer production,” Wade says.

Wooden Robot specializes in traditional Belgian farmhouse-style beers and focuses on local, fresh artisanal ingredients. As a Certified Craft Malt Brewery, Wooden Robot buys about 95% of its malts from Epiphany Craft Malt in Durham, one of three craft malt houses in the state. The North American Craft Maltsters Guild only requires breweries to purchase more than 10% of malt from a certified local malthouse to receive the designation. It’s one of three certified breweries in Charlotte.

“If you think about it in terms of cooking, hops are like the spice, so it is not the majority of the ingredients. Malt and water are the primary things that make beer beer,” Wade says. “Wooden Robot is a 15-barrel brewery, which equates to about 500 gallons. For every batch of beer, 100 pounds of hops are required — depending on the beer — whereas about 1,000 pounds of malt are needed.”

In 2020, Epiphany Craft Malt released a climate-resilience plan outlining goals to improve environmental sustainability and become carbon negative. During the same year, Epiphany Craft Malt distributed about 174,000 pounds of malt to Wooden Robot for beer production, all of which was carbon-neutral. This removed about 150,000 pounds of carbon dioxide from the atmosphere, which is equivalent to a car burning nearly 7,500 gallons of gas. By sourcing locally, Wooden Robot also cuts down on the miles traveled for transporting its heaviest material.

Wooden Robot has adapted other sustainable practices as it makes its beer, including recycling water and giving its spent grain to local farmers for cattle feed.

“It is especially important for breweries to practice sustainability because we produce an agricultural product. The more the climate changes, the harder it is for us to get quality ingredients to produce quality products,” says Wade, who started Wooden Robot in July 2015 in Charlotte’s South End neighborhood. “It is a self-sustaining loop. If we do things to fight climate change, it will not only help society at large, but it will help us continue to get ingredients that are high quality and affordable.”

Sierra Nevada, a Chico, Calif.-based brewer that opened a nearly $110 million site in Mills River in Henderson County in 2015, has long emphasized green initiatives such as solar energy, CO2 recovery and rainwater collection. In 2016, the Mills River location became the first production brewery in the U.S. to achieve Platinum certification for Leadership in Energy and Environmental Design, a certification system awarded to structures designed and built using sustainable strategies. Other N.C. breweries, such as Mother Earth Brewing in Kinston and Asheville’s New Belgium Brewing, have received similar designations.

“Mills River was set out to be LEED-certified since day one,” says Mandi McKay, director of social responsibility for Sierra Nevada. “Throughout the process of construction, we continued to up the ante.”

Mills River uses a solar system providing about 6% of the electricity needed to operate the brewery. About 2,200 solar panels are installed on the roof of the packaging building, along with nine solar trees in the parking lot. In 2020, Mills River’s solar panels generated more than 600,000 kilowatt-hours of energy, equivalent to the electricity used by about 57 average-sized U.S. homes for one year.

“Sustainability at Sierra Nevada has been pretty core to who we are and how we have operated pretty much our entire history since 1980,” McKay says. “Sustainability goes hand-in-hand with operating a successful business. You are thinking about long-term processes, resilience and putting in place systems and technology that allow your company to sustain itself.”

On a smaller scale, Birdsong Brewing in Charlotte installed a 75-kilowatt-hour solar system on its roof in 2017 that has saved approximately $25,000 in electricity since the installation. It has benefitted from the solar power tax credit, a Duke Energy rebate program, making the payback period slightly less than five years.

Solar, along with other green initiatives, reflects the brewery’s goal of facilitating environmentally friendly processes that help sustain the business, community and environment. “Craft beer is an integral part of the community, and any business that aspires to be a beneficial contributor should spend time focusing on ways to reduce its environmental footprint,” says Birdsong President Chris Goulet.

“The takeaway for the brewing industry is that it is financially feasible to introduce energy-saving practices into the brewing process,” said Sanya Carley, an associate professor at Indiana who was part of the study, in a release. “Even if it ends up adding costs, more than half of all beer consumers are willing to absorb those extra costs.” ■