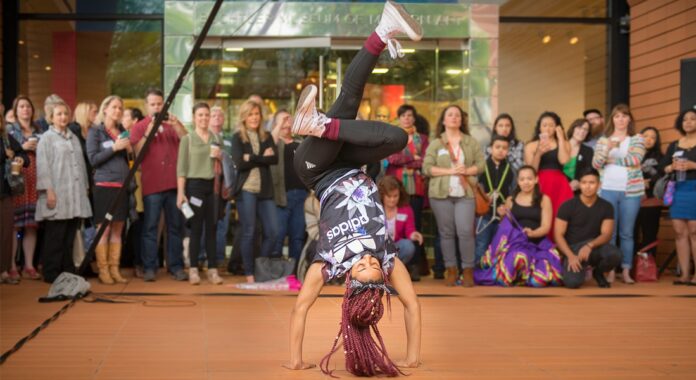 We can’t all paint, pirouette or compose a symphony. But we’re all creative.

Matt Olin preaches his “everyone is creative” gospel to a packed house every month at the breakfast meetings he introduced in Charlotte last November. From Albuquerque, N.M., to Auckland, New Zealand, thousands meet for coffee on first Fridays to hear a talk on the same one-word theme. Topics have included money, urbanism, bravery, failure and humility.  Unlike other networking groups, admission is free and open to anyone. CreativeMornings is operated by volunteers: The speakers, photographers or videographers do not get paid. Those who sign up online fastest, artists to CEOs, get a seat.

In Charlotte, those seats tend to fill within five minutes. Olin, a copywriter and theater producer, is host and emcee. Cinematographer Levin Chaskey films, and his wife, Alexis Jo Bruce, curates the live music; CreativeMornings might be one of the few places where dance parties spontaneously erupt before 9 a.m. Tim Miner, marketing director for the Brixx Wood Fired Pizza chain, completes the leadership team. There’s donated coffee and pastries, mingling and often a trivia contest or even a game of Truth or Dare before the morning’s speaker is introduced.

CreativeMornings began in Brooklyn in 2008 when graphic designer Tina Roth Eisenberg wanted inspirational speakers at conferences that didn’t require travel or a lot of time. When a friend asked if he could start something similar in Zurich, she realized she had founded a movement. The 151-chapter organization adds three to five new groups each month. Raleigh opened North Carolina’s first chapter in 2012, while Rachel Zink kicked off an Asheville version this summer.

CreativeMornings is not a business networking group, but businesspeople attend — and often end up networking. “Sometimes there can be a predator-and-prey element to [networking organizations],” Miner says. “But at CreativeMornings, no one has their guard up. It’s not the kind of place where anyone’s going to give you a hard sell.”

In Charlotte, about 275 regularly attend. Speaking to a full house at downtown Charlotte’s Bechtler Museum of Modern Art, Cooper Lambla of the U.S. National Whitewater Center talked about assessing risk as one paddles through raging water. Scouting rapids as formidable as those on the Zambezi in Africa, Lambla is always looking for hazards and ways around or through them. Although his slides of the dangerous waters look beautiful, he says, “It’s not always alluring to take risks. The spectrum of consequences is huge on the river, as it is in life. You have to consider the possibility of failure.”

We’re used to hearing about risk and reward, but Lambla focused on risk and responsibility. His 20-minute talk is one that perhaps every corporate board of directors should hear.

Creativity has its place in business — and not just at ad agencies, Miner says. “If you’re not allowing your employees to release their creativity, you’re leaving money on the table. You’re missing out on ideas that could boost your bottom line.”

Olin and Miner, friends since high school and former co-columnists at UNC Chapel Hill’s The Daily Tar Heel, are perfect foils at Charlotte’s group. Both are creative evangelists. “If creativity didn’t matter, you’d walk into a grocery store and see nothing but white boxes with black, block lettering,” Miner says.

“And it would be Comic Sans,” Olin says. He gets the last word: “Creativity is really our greatest currency.”