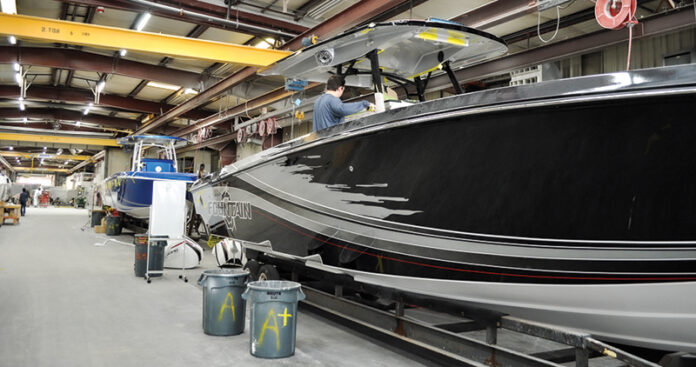 With about 322 miles of ocean shoreline and dozens of lakes and rivers running across the state — 5,201 square miles of water area, to be exact — North Carolina is an ideal location for boat builders. Its liquid assets caught the eye of one of the world’s largest fishing and recreational boat builders earlier this year: White River Marine Group in May said it bought New Bern-based Hatteras Yachts, among the state’s most famous boat manufacturers, paying an undisclosed price to a private-equity group that had owned the business.

The acquisition is huge news for eastern North Carolina’s boating industry as White River said it wants to solidify New Bern as the “world’s capital for saltwater gamefish and boat building” with plans for a $34 million expansion and as many as 500 new jobs. Hatteras’ new owner has credibility to make such claims because it’s part of a holding company that owns outdoor retail giants Bass Pro Shops and Cabela’s, which have combined annual sales of $6.5 billion.

With hundreds of new jobs comes the need to stock the pipeline of boat-building workers in an area that includes manufacturers such as Pamlico Yachts and Caldwell Marine. Local community colleges are stepping up to fill the gap.

Beaufort County Community College in nearby Washington is launching two programs in boat manufacturing and repair at Beaufort County Skills Center this fall. Enrollees can earn a diploma or third-party and postsecondary credentials, learning about production of both contemporary boats that involve fiberglass and electronics and higher-end models that require wood craftsmanship skills. Wilmington’s Cape Fear Community College is offering similar boat-manufacturing programs.

“Basically, from start to finish, students are going to come in, they’re going to learn the basic skills to get the project going,” says Connor Jones, Beaufort Community College’s lead boat-building professor. “And over the course of three semesters, they’re going to complete a whole boat and see a finished product.”

The recreational boating industry has a $5.5 billion annual impact on North Carolina’s economy and supports more than 20,100 jobs, according to the National Marine Manufacturers Association. North Carolina has 69 establishments that build ships and boats, ranking eighth in the nation, according to labor market analytics firm Emsi. Jobs in the N.C. industry have an annual average salary of $63,366, while the number of boat-building jobs grew 5% from 2016-20.

“As long as the economy stays strong and there are people out there who want to enjoy the water, [the boating industry] is going to keep rolling,” Jones says. “I think there is going to be more demand for educational institutions like us to come up with programs like this because just like everything else, boats are becoming more and more advanced. These skills are going to have to be taught.”

Beaufort’s new programs are funded in part by the Golden LEAF Foundation, which provided a $200,000 grant for equipment and to hire an instructor. The Rocky Mount-based foundation directs money collected from the 1999 legal settlement with the big U.S. tobacco companies to aid economic development, mostly in rural areas.

Jones is an East Carolina University graduate who previously worked in various engineering and production roles at Greenville-based sportfishing boat maker Grady-White Boats. The community college is seeing a lot of interest in the curriculum from local manufacturers and students, he says. Its new Beaufort Promise program, which will cover all tuition and fees for students through the spring 2023 semester using various federal and state programs, is also enticing future boat builders.

“Right now, classes are set up from Monday to Thursday, from 8 a.m. to around noon,” Jones says. “That gives students the opportunity to hold jobs in the afternoon if they want. We’ve had some local companies express interest in having employees do both. And there will be internships. We are going to be working with manufacturers to get people part-time jobs and then secure them jobs after they graduate as well.”

The manufacturing and repair programs give students a head start needed to jump into the industry.

“There’s nothing like being diverse and knowing all the skills it takes to build a boat from start to finish,” Jones says. “You can’t really put a value on someone that knows multiple skills that you can put on any job at any time. And that’s just going to help our students succeed in the workplace.” ■