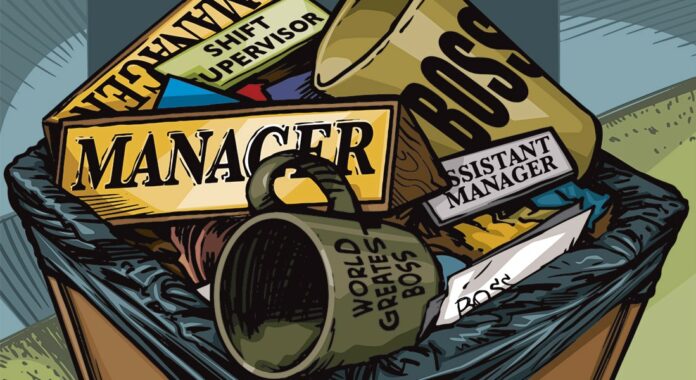 Long before software company owner Brian Robertson coined the term “holacracy,” before startup GitHub implemented the management philosophy and then abandoned it, before hundreds of employees at online shoe store Zappos quit over it and even the U.S. military began moving more decisions from commanders to soldiers, a plant in Durham has been operating without bosses. For decades.

The GE Aviation factory in Research Triangle Park builds seven different jet engines including the GE90, largest in the world and found in the Boeing 777. If you’ve flown recently, chances are good it was on a plane with a Durham engine under the hood — half of the world’s commercial jet engines are assembled here. All 350 employees report directly to plant leader Alan Kelly, a Scotsman who arrived at the plant three years ago. It was his first U.S. plant, not to mention his first “self-directed” one. Even after a decade working for GE, he wasn’t sure whether to believe the company’s marketing materials about a factory without managers. “I’ve learned in the last three years, having an idea that’s supported by 350 people,” he says, “is better than an option that has no buy-in.”

The plant’s 325 technicians, who work their way up to different skill and pay levels, are divided into 20 teams, each with names that sound like space shuttles or ships — Kodiak, Voyager, Liberty. The teams send representatives to nine different councils for major decisions. But resolutions of how the daily works gets accomplished or who takes vacation when are up to the teams, which meet briefly every afternoon and are led, eventually, by every member. Kelly and Erin Healy, the plant’s HR manager, sit in the middle of the remarkably quiet assembly floor, rotating between buildings every six months. There is no open-door policy because, Kelly says, “We don’t even have any doors.”

Flat, non-hierarchical or peer management — whatever the name — a new form of organization is taking hold at companies, with varying levels of success. About 18% of the workforce at Amazon-owned shoe giant Zappos opted for a buyout last year after CEO Tony Hsieh switched from a traditional hierarchy to a no-titles, self-managed holacracy, or “teal,” as Hsieh calls it, many saying the radical shift created chaos.

Mebane-based ARCA, designer and manufacturer of computer systems for cash-handling devices, launched holacracy in 2014 with the help of Brian Robertson’s management-consultancy firm HolacracyOne. Bosses become “lead links” who oversee “circles,” or projects that require certain “roles” being filled. Kevin Joyce describes the system as a complex set of rules that brings “extreme clarity” to an organization. He joined ARCA straight out of law school in 2013 and became responsible for implementing holacracy at the company’s U.S. operations and, a year later, in Italy. ARCA most recently introduced the system in France, where it acquired another company this summer. All of ARCA’s 550 employees in the U.S., United Kingdom, France and Italy are using it.

“I see holacracy as a way for us to effectively distribute authority within the company,” founder Mort O’Sullivan wrote in a blog post in 2014, “allowing for better, faster decisions that make us more responsive to internal and external changes.” Last year, ARCA reported that revenue rose 87% between 2012-14.

In Durham, Kelly says his plant exceeds GE production goals. GE Aviation had revenue of $26.7 billion and profit of $5.5 billion in 2015.

“Self-directed teaming” was so successful, especially in Durham and another plant in Canada, GE began implementing the model at its 83 aviation sites around the world, including North Carolina plants in Asheville, Wilmington and West Jefferson. Durham has honed its system since 1993; prospective employees undergo a rigorous screening and assessment process to test technical skills and gauge their ability to work in groups. Plant leaders come and go, but the system keeps rolling. If it doesn’t, Kelly risks hearing from his direct reports, all 350 of them.