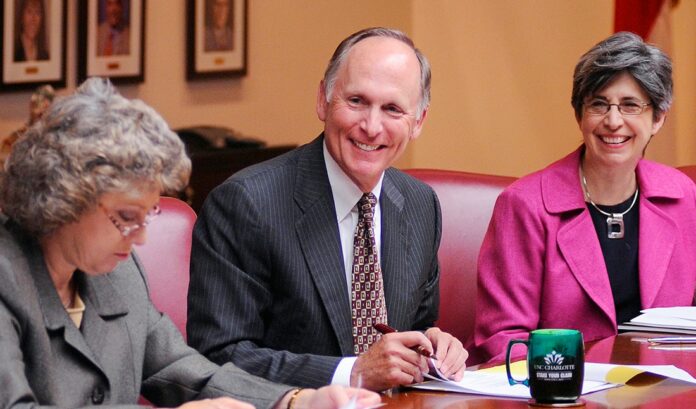 University CEO Survival 101 is a course that Philip Dubois could teach with great credibility. The boss of UNC Charlotte will soon be the longest-serving chancellor in the 17-campus UNC System, holding the job since July 2005 as it added more students than any of its peers. (Steve Ballard, who has run East Carolina University since 2004, is stepping down in July.) Dubois, 65, may stay longer, citing a $200 million fundraising campaign that runs through 2019 and a $90 million science building to open in 2021.

Because nothing comes easy in a network historically  dominated by older, revered campuses, Dubois has been busy. Over the last 30 years, UNC Charlotte added about 17,000 students. Its capital investments have topped $1.2 billion since 2000. It has 9.5 million square feet of space, including classrooms, parking decks, a business incubator and a football stadium. It all happened before a $1 billion light-rail line, scheduled to open next year, provides a 20-minute, two-buck ride connecting the university with downtown Charlotte, about 10 miles away.

The changes haven’t diverted the university from its mission of offering a reasonably priced education to a diverse group of traditional and nontraditional students, Dubois says. The university accepted about 2,150 community-college transfers in 2014-15, compared with fewer than 400 at UNC Chapel Hill. Almost 40% of UNC Charlotte’s student population is nonwhite, compared with about 30% at Chapel Hill and 27% at N.C. State University.

The diversity is partly due to an admissions policy encouraging transfer students from community colleges or other campuses, many of whom opt for less expensive ways to start their collegiate careers. While the addition of 22 doctoral programs since 2000 has bolstered enrollment of international students, 91% of UNC Charlotte undergraduates are North Carolina residents with more than 50% coming from the surrounding eight-county metro area.

Dubois credits UNC Charlotte’s unusual growth to several key factors: the city’s increased population and snappier national reputation; available land for expansion while many peers are landlocked; and an ability to attract more students without compromising academic standards. Enrollment gains have boosted revenue, making it easier to pay for new buildings. While the state in the last decade provided $50 million for a downtown Charlotte classroom tower and $77 million for an energy-research building, much of the capital spending stems from bonds backed by tuition, parking fees, dining plans and other sources. The $2 billion state bond issue approved in March will pay for the new science building, complementing a facility that opened in 1985.

The growth overcame the 2007-09 recession that caused state lawmakers to cut spending for higher education, including a $59 million annual reduction at the Charlotte campus. The state now pays about 60 cents for every dollar of students’ expenses, versus 80 cents a decade ago, forcing more reliance on tuition and other fees, Dubois says. Because more students led to more classes and revenue, UNC Charlotte laid off only 12 people from a 3,500-person payroll, he says.

Keeping costs down is vital, even if Charlotte’s tuition is among the lowest of its peer group of large, urban U.S. universities. Annual tuition of about $6,600 ranks in the middle of the UNC System and is 20% lower than the two flagship campuses. Dubois opposes significant tuition increases that can load graduates with too much debt and inhibit others from attending.

“Families don’t want their children to take on debt, and it’s a lot of work to get a degree,” he says. Seventy percent of UNC Charlotte students have jobs, and 70% are on financial aid, including 9,000 who receive federal Pell grants, provided to low-income students. That’s more than any other UNC campus.

That includes families such as Dubois’ — he was the first in his family to attend college. His dad was a reporter and publicist, while his mom was an executive assistant. A native of Oakland, Calif., he earned an undergraduate degree at the University of California, Davis, in 1972, then master’s and doctoral degrees in political science at the University of Wisconsin. After returning to UC Davis as a professor, he took his first administrative position in 1980 and came to UNC Charlotte as provost in 1991. He left in 1997 to head the University of Wyoming, then returned to North Carolina eight years later when Jim Woodward stepped down after 16 years as chancellor.

“Phil stepped into a very good situation that Chancellor Woodward had left, and he hasn’t skipped a beat,” says Karen Popp, a Washington, D.C.-based corporate lawyer who chairs the university’s board of trustees. “He’s an interesting mix of a good manager and a worker bee who knows how to delegate appropriately. He can cut through complicated issues, and he can see many steps ahead and figure out how to get things done.”

He also knows how to inspire loyalty: seven of the nine senior academic and business executives reporting to Dubois  have been at the university for at least eight years.

Dubois’ personal experience influences his views on college affordability. “I am a first-generation college student, and I didn’t have any debt coming out even as a grad student because my parents supported me and the costs were so low,” he says. “But what are the chances these days that someone who looks like me — we weren’t impoverished, but we were very middle class — can become a college president? If you don’t get the college degree, there’s no shot.”

Growth carries its challenges, and students attending UNC Charlotte now are likely to be in larger classes than their predecessors. Despite the enrollment growth, many academic departments haven’t added full-time professors during Dubois’ tenure, says Leak, who came to the university in 1998. Undergraduate core classes in the business school that used to average fewer than 50 students 20 years ago now often have more than 100. “If a class jumps from 25 students to 35, there are certain things you can’t do.”

The university has added 220 full-time professors and 85 part-time instructors since 2005, for a total of 1,550, a 31% increase, spokesman John Bland say. Many new profs work in engineering, technology and science-related programs. Salaries have stagnated, with professors hired since 2008 not receiving a wage hike until this year.

But UNC Charlotte’s faculty mostly blame state lawmakers for higher ed funding cuts that Leak says are damaging North Carolina’s overall reputation. “Chancellors have to mitigate what’s being dictated by the state and general administration, and that’s where [Dubois] has done a good job of keeping us aware. I can’t speak for everyone, but he has been out front in trying to assist with higher salaries for faculty and staff.

College presidents spend much time raising money, and Dubois has picked up the pace at UNC Charlotte, which started as a two-year school near downtown in 1946. Privately raised funds totaled $80 million from 2013-15, compared with $49 million in 2010-12 and $42 million in 2007-09. The latest period includes contributions for the school’s new football program, which Dubois shepherded effectively despite the recession and significant skepticism, Popp says. A five-year capital-raising plan hopes to attract $200 million, while the endowment has increased 70% since 2009 to $179 million. It’s a pittance, of course, compared with UNC Chapel Hill’s $3 billion endowment.

For his efforts, Dubois is the third-highest-paid chancellor in the system after his salary jumped 19% last year to $387,500. N.C. State University’s Randy Woodson earns $590,000, and UNC Chapel Hill’s Carol Folt, $570,000. Some peers at elite private colleges earn more than $1 million.

Dubois’ biggest legacy may unfold in 2017 when two light-rail stations open near campus, creating a link with Charlotte’s center city. The university isn’t paying for the project, though federal funding hinged on the expected ridership of students and staff. Woodward opposed the project, fearing it would hurt the campus’s pedestrian feel. While a big fan of his predecessor, Dubois says it was a mistake that he gladly corrected during his first months as chancellor after negotiating with light-rail advocate Pat McCrory, then Charlotte’s mayor and now governor.

The train will make it easier — and safer — for students to take advantage of Charlotte, he says, joking that many attend  “internships” on Thursday and Friday nights at downtown pubs. “It’s going to allow us to sell the city in ways we’ve never been able to do before.”