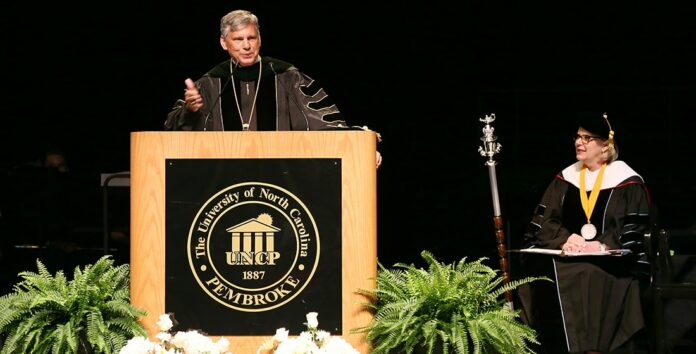 UNC Pembroke was founded after the Civil War to serve American Indians, but in recent years it has quietly but steadily grown, reaching students who have never before heard of the town of 3,000, 45 miles south of Fayetteville. The school welcomed a record freshman class last fall, bringing the total student body to about 6,400. In April, UNCP installed a new chancellor, a native son who grew up in the university’s shadow. Robin Cummings spoke to Business North Carolina on the eve of his installation. His comments were edited for brevity.

Q: How do you maintain your legacy of educating American Indian students?

A: One hundred and twenty-nine years ago, this school was started through the efforts of seven American Indian men. Now, go back in your mind — this was just at the end of the Civil War. These were people who put their life, their liberty, their treasure, probably the safety of their family at risk by stepping forth and saying, “We see the need for education for our Indian children.” That history you allude to is real. It is something we see as part of our history, as part of our past, but it does not completely define our future. For many years, UNCP was really only the university in North Carolina where American Indians could go and get a higher education, but that changed with integration. … My predecessor, Dr. Kyle Carter, started a southeast American Indian studies program. Part of our vision is to grow that program into a freestanding school.

Q: You’re a physician by training. Being a chancellor wasn’t necessarily part of the life plan?

A: I was a cardiothoracic surgeon. I trained at Duke. I left Duke in 1992 and went to Moore County and joined a partner there. We set up a cardiothoracic program at the hospital there. I had a very good career, but in 2004, I had an illness … something called an acoustic neuroma, a benign kind of brain tumor that we were able to resect and remove, but it left me with some fine motor skills deficits. … I made the decision to retire from heart surgery. I left in 2004 and got involved in the administration of health care. At one point [as head of North Carolina’s Medicaid program], I oversaw 1.8 million patients, managing a $14 billion budget.

Q: Do those experiences make you a different kind of chancellor?

A: It seems like, as I look back over my life, everything I’ve been doing from the time I left medical school until July 15 was getting me ready for this position in one way or the other. … I’m not a traditional academic chancellor. But then again, a lot of universities are beginning to look outside the academic world for their leaders. If you look across the United States, roughly 25% of presidents and chancellors are now nontraditional candidates. We’re coming from the business world. What you’re finding are people like myself, people like Chancellor [Zito] Sartarelli in Wilmington. We’re bringing … a business mindset to the world of academia.

Q: Now that the state’s bond has passed, will UNCP be getting a new business school?

A: Absolutely. We are thrilled we were able to get to that table and get $23 million included on that bond for a new school of business. We have a new dean who will be starting [this summer]. His name is Barry O’Brien. We think he’s going to be able to take this new building and take our school of business and move it into the future in a very strong way. We have businesses here in this area that are asking us for business students. … And we’ve got other companies that are moving to this area telling us we need business-minded students, we need MBAs.

Q: It’s no secret that eastern North Carolina has lagged when it comes to industry. How can UNCP help turn that around?

A: Part of my vision is to get this region to realize the economic powerhouse that this university is. … I don’t mean to diminish what’s gone on in the past, the foundation that we have in place, but going into the future, the goal is to get the region to recognize exactly the tool that you have sitting here that can be used to grow this region in many, many ways. We can use this university, along with others — we have several community colleges in the area that are also very strong — to … make UNCP a strong regional presence and force and get our region to recognize its potential to help us develop the economy.