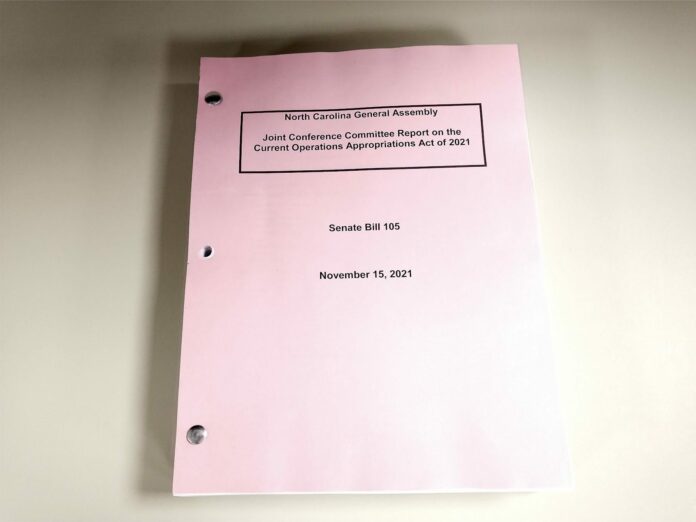 The new state budget proposal released Monday would eliminate the corporate income tax – but not until after 2029. That’s a much more distant timeline than what was proposed in the original House and Senate budgets, and the rate cuts wouldn’t start until the 2025 tax year.

The more immediate tax change for businesses in the budget bill affects the calculation for franchise tax payments, a provision that was also in the previous House and Senate proposals. That plan would change how the tax is calculated and would reduce the franchise taxes on businesses by about 25%, but the majority of businesses wouldn’t see a change.

Current law requires companies to calculate three different formulas – known as “bases” – and pay taxes on whichever of the three amounts is largest. Republican legislators want to simplify that and make every company use the same formula: $1.50 for every $1,000 of the company’s net worth in North Carolina.

The vast majority of companies already use that formula. Those that don’t typically have major real-estate and equipment assets in North Carolina, which triggers one of the other calculations and a higher tax bill.

House and Senate budget writers have been tweaking their spending plan for months to reflect input from Gov. Roy Cooper and legislative Democrats. Cooper vetoed a franchise tax cut bill in 2019, and he’s opposed to corporate tax cuts in this year’s budget proposals. On Tuesday, he announced that he’ll sign the budget despite those concerns.

The House’s budget didn’t fully eliminate the corporate tax, instead cutting it from 2.5% rate to 1.99% over two years. The Senate wanted a full phase-out over five years, starting in 2024 with a 0.5% reduction each year until 2028.

The delayed start until 2025 means future lawmakers will handle the budget implications of the tax cuts. They could also repeal the cuts, but otherwise the rate changes would take effect automatically.

The House also notched a victory over the Senate in how to structure economic relief to businesses affected by COVID-19. The final budget would allow tax deductions for businesses that received Paycheck Protection Program loans, breaks worth a total of $427 million.

The Senate’s budget opted instead to give “JOBS Grants” of $18,750 each to businesses that received PPP loans or one of several other pandemic assistance programs. In addition to the PPP tax breaks, the final budget calls for $500 million for a separate small business grant program aimed at the hard-hit hospitality and entertainment industries, known as the Generating Recovery for Organizations Without Earlier Relief, or GROWER program.

Other business-related highlights of the budget bill include:

-$338 million for an unspecified economic development program for “projects meeting or exceeding high-yield metrics only upon an act of appropriation by the General Assembly.” Further language in the budget bill indicates that some of the money could be directed toward a manufacturer moving to the Randolph County industrial megasite that involves at least a $1 billion investment and more than 1,750 jobs.

–$283 million to help build a deeper, expanded Wilmington Harbor, where one of the state’s biggest ports is located

-$90 million over two years to expand engineering programs at N.C. State, UNC Charlotte and N.C. A&T University. “The investments in Engineering N.C.’s Future will support the continued growth of related economic investments and job opportunities in the state by expanding enrollment opportunities at these constituent institutions to enable more students to pursue an education in engineering fields,” the budget bill says.

-$20 million to Fayetteville Tech Community College for a new fire training center and a truck driver training center, one of the largest appropriations for an individual community college

-$46 million for speedway infrastructure and other motorsports programs (including $18 million for the long-abandoned North Wilkesboro Speedway), plus $1 million to create “cultural trails related to moonshine and motorsports”

-No provision to expand Medicaid, long a priority for Democrats, but the budget does create a legislative study committee to review the issue and make recommendations next year

-$5 million per year for grants to the e-sports industry, as well as funding for e-sports programs at UNC Greensboro and N.C. State

FInal votes on the budget are expected Wednesday and Thursday.