When the North Carolina Zoo opened in 1974, it was expected to become a mecca for visitors and animals alike. Organizers envisioned a wildlife wonderland, with a spread of creatures from the seven continents as well as the seas. After much competition with other areas, lawmakers picked the rural, manufacturing town of Asheboro for the statewide attraction because of available land and its proximity within 90 minutes of the three major state metro areas.

Nearly 45 years later, state officials are intent on revitalizing the venue, led by a top executive who turned a smaller, troubled Ohio zoo into a winner before coming to North Carolina three years ago.

It’s clear that when North Carolina established one of only two state zoos in the U.S., state leaders made a bet that has yielded mixed returns. Increased visitor dollars have helped Asheboro cope with the loss of key manufacturers, while the zoo’s design, animal conservation efforts and programming for schoolchildren have gained widespread acclaim.

But development at the zoo has been slow as attendance plateaued and state investment has failed to keep up with maintenance costs. The facility now has more than $20 million in repair needs that have remained unmet for years. Only two of the seven original concepts have come to fruition since the zoo opened: the North America and Africa sections. While Randolph County’s population nearly doubled since 1970, slightly below the state’s rate, urban counties have exploded: Mecklenburg tripled and Wake grew fivefold.

With revenue far below costs of maintaining and building the facility, the zoo has been forced to compete with more pressing needs for increasingly scarce state dollars. State officials spent a meager $66 million from 1964 to 2014 for zoo expansion and maintainance.

“It’s a fantastic zoo, and they do a great job with the programming,” says Wit Tuttell, executive director of Visit North Carolina, the tourism arm of the Economic Development Partnership of North Carolina. “It’s just a matter of getting people to know about it. It’s a competitive market out there. There’s a lot of competition when it comes to things people want to do and see.” 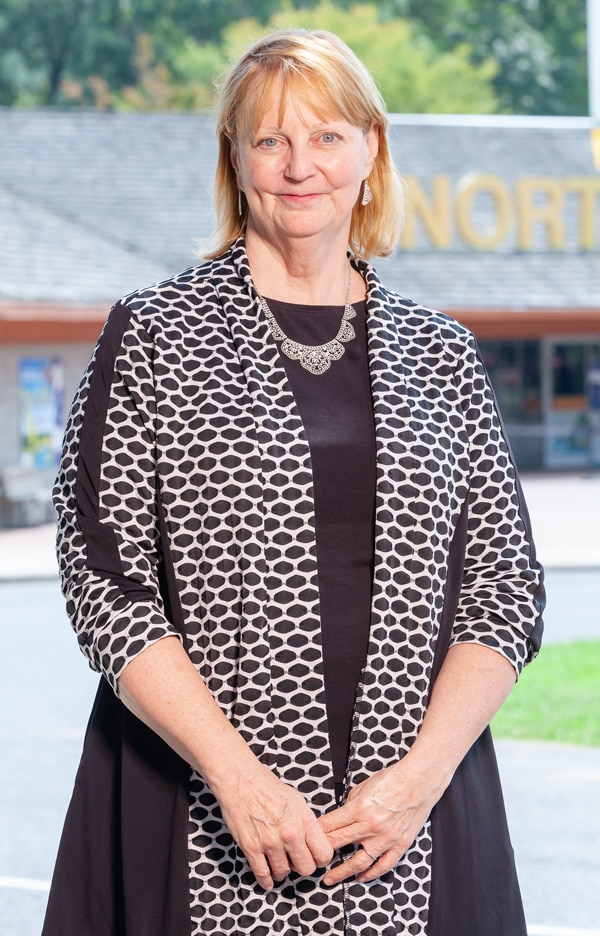 Pat Simmons joined the zoo as deputy director in 2014 and became director and CEO the next year.

The term “zoo” is actually a huge misnomer, according to N.C. Zoo Director Pat Simmons. Many visitors don’t know the facility is more of a wildlife preserve than a classic zoo, with 500 developed acres on a total of 2,600 acres, and they don’t plan accordingly, she says. That can be especially true for newcomers to the state who may expect to see a tightly spaced series of landscapes that make it easy to spot a few of the zoo’s more than 1,600 animals.

“It is a very, very different business model,” Simmons says. When most people think of zoos, they “tend to be smaller in acreage and people come to them because it’s easy. It also feels more comfortable because it’s in your town and you aren’t going out through multiple counties to get to a place.” At North Carolina’s zoo, “you’re actually in the woods with the animals, and it is big. And so you should plan on making it more than one day.”

What officials hoped would become a prized gem of North Carolina has become more of an afterthought. State appropriations have remained steady at about $7 million to $11 million annually over the last 20 years, while North Carolina’s population has grown by a third, or more than 2.5 million people, from 7.7 million in 1997 to 10.3 million. The $20 million of improvement backlogs include repairing glass panels and the air-conditioning system at the R.J. Reynolds Forest Aviary and repair of the Desert area HVAC system, water and sewage line.

The good news is that the zoo is fighting back after years of underinvestment and malaise. Simmons, who joined the zoo as deputy director in 2014 and became director and CEO the next year, is winning plaudits for her efforts to improve the zoo’s marketing and ties with the lawmakers who determine its financial fate. Her predecessor, David Jones, had led the operation for 21 years before his retirement at age 71.

Evidence that state officials are taking a renewed interest in the zoo is a plan for the zoo’s first major expansion since the North American exhibit opened 24 years ago. That’s a contrast with privately run amusement parks such as Carowinds or Busch Gardens that annually add attractions to spur enthusiasm and return visits.

The Connect NC bond package passed in 2016 set aside $25 million to start building an Asian region slated to open by 2023, pending additional funding from public and private sources. It will be home to tigers, red pandas, Komodo dragons and other Asian creatures, along with an events center. After its completion, the zoo plans to add an Australian area featuring kangaroos and other Down Under creatures. Also included in the bond projects are a new baboon holding facility, demolition of the African pavilion and service roads to the Zoofari.

Paying for operations and maintenance involves a combination of two sources: the nearly $11 million annual state contribution and operating revenue that has averaged about $10 million annually in recent years. That amount includes ticket and concession sales and about $1 million provided annually by the nonprofit N.C. Zoo Society, a fundraising group that operates independently of the state-owned facility.

“North America was built in the ’90s, and then they grew pretty quiet with new construction,” Simmons says. Since then, the zoo has made smaller changes such as expanding its polar bear space and focused on programs, conservation and education. “But the bottom line is … people are looking for the next experience. So how do we provide that?”

Simmons also is achieving success in consistently attracting more money from the N.C. General Assembly. Over the last three years, lawmakers have appropriated $4.5 million annually to chip away at the deferred maintenance backlog on top of the annual appropriation. Lawmakers hadn’t set aside additional funds for deferred maintenance prior to fiscal year 2015-16.

Simmons knows the zoo, which has about 370 state employees year-round and more than 750 at peak season, can only build major exhibits periodically due to funding and the complexity of design and construction work. She’s trying to make up for the lack of big, shiny updates by developing new experiences at the zoo, such as the Air Hikes Rope Course, the Zoofari bus ride across Watani Grasslands and Dragonfly Paddle Boats. They are relatively inexpensive to add and boost revenue by the $3 to $20 charged to users, in addition to $11 to $15 for zoo admission. Simmons is considering adding a butterfly house and incorporating virtual reality into guests’ zoo experience.

“Right now what North Carolina Zoo needs to be doing is providing experiences in nature and giving people authenticity in a very electronic and plastic world,” Simmons says. 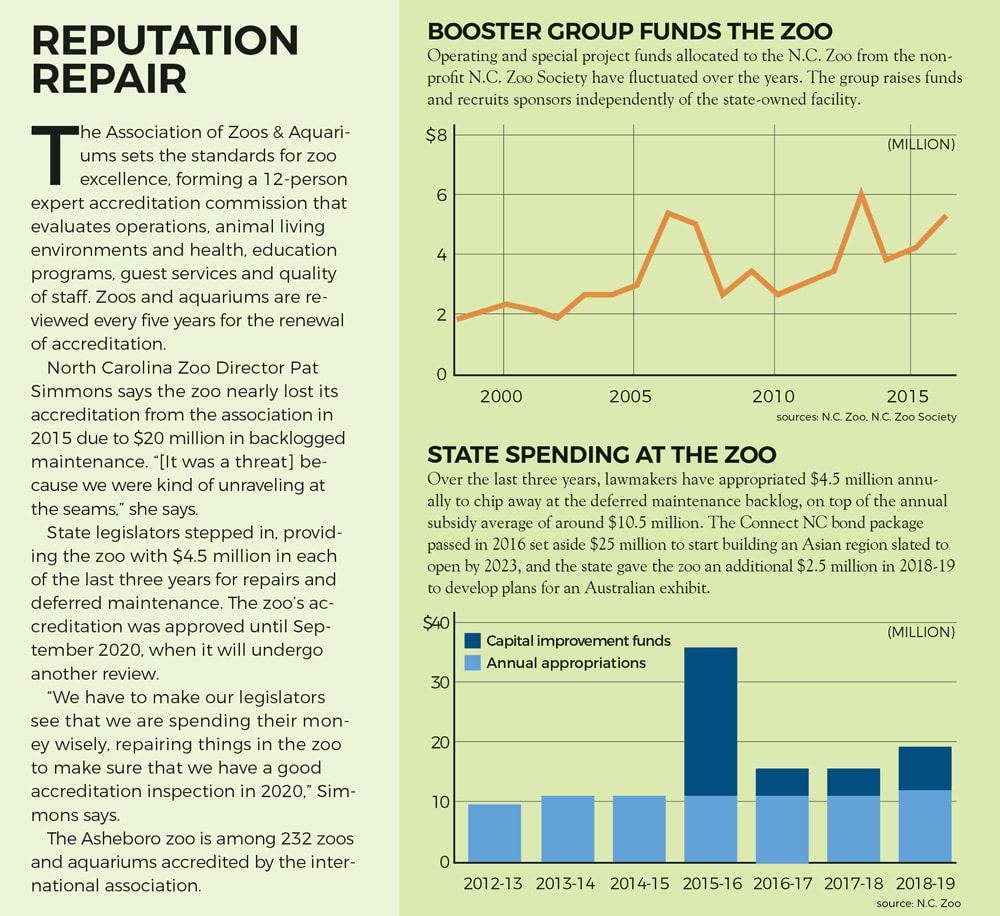 Even with expanded funding, the N.C. Zoo faces struggles to draw large crowds from metropolitan areas partly because of limited lodging in Asheboro. The city has fewer than 500 hotel rooms available, not enough to accommodate a large number of zoo guests. Day trips account for most visits, officials say.

“When people stay the night, they spend a lot more than if they just take a day trip,” Tuttell says. “If they wanted to have more of an impact on that area, having more lodging properties there would be a real benefit.”

The N.C. Zoo saw about 860,148 visitors in 2017, small potatoes compared to some of its neighboring competition. Riverbanks Zoo in Columbia, S.C., had record attendance of 1.39 million in 2017 with revenue of $23 million. Riverbanks is not owned by the state, but it receives government tax breaks and funding. Revenues from its operations cover more than 75% of expenses.

Improved funding for the zoo tracks the overall economy, notes John Skvarla, a Raleigh economic-development lawyer who led two state departments during Gov. Pat McCrory’s administration and has been an active zoo proponent for many years. When the recession hit in 2008, the state faced crippling budget cuts, and the zoo’s needs weren’t near the top of the list, he says. Now, the state is posting revenue surpluses from the strong economy, enabling it to spend more on the attraction. A new U.S. 64 bypass that will provide easier access to the zoo is scheduled to open in late 2019 or spring 2020. That road will make a big difference, Simmons says.

Skvarla considers the zoo an opportunity for North Carolina to propel a mostly rural area that isn’t growing significantly. “If you want to create an entrepreneurial environment that also is going to bolster white picket-fence communities, you take state assets and you dedicate them to rebuilding those [rural] areas,” he says.

Simmons did not follow the typical path to becoming director of the world’s largest zoo, measured by its acreage. Growing up in Ohio, she loved both biology and art, but chose the latter, earning a bachelor’s of fine arts from the University of Cincinnati. She later earned her master’s in management from the University of Akron after discovering her passion for nonprofits and fundraising.

“I fell in love with the fact that any really great improvement to the quality of our life is because somebody made a huge effort to make it happen,” Simmons says.

She joined the Akron Zoological Park in Ohio in 1983 and, after two years, was named president and CEO. The site was “a dump,” she says, neglected and underfunded at a time of economic stress for the city best known as the home of Goodyear Tire and Rubber Co. and Lebron James.

In 1983, the Akron zoo had $10,000 in the bank and more than a million dollars of deferred maintenance. “Anybody in their right mind should have run screaming from that,” Simmons says. “I looked at it and instantly fell in love. … It had a palette of exhibits for me to design.”

Over the next 30 years, she helped restore the zoo into a popular tourist destination while securing more than $180 million in public and private funding. The zoo’s annual budget grew from $240,000 to $12 million, and its payroll jumped from seven to 106.

After many years in Ohio, Simmons jumped at the chance for a new challenge on a “much larger and grander scale” that would allow her to utilize both her business and art background.

“Having business strategy and having creative strategy from art combined together create a very powerful and unique combination that allows you to look at things differently,” she says. “When it comes down to it, it’s just really cool and fun problem-solving.”

North Carolina leaders have high hopes for the director’s leadership.

“Pat Simmons is an absolute superstar,” says Skvarla, who helped recruit her during his time in the McCrory administration. “She has this vision for the future of transforming the zoo into something.”

Skvarla has big ambitions for a Disney-caliber tourist attraction that would include a 150-room hotel and conference center at the zoo, plus shops and restaurants. Eventually, he foresees an upscale spa and resort hotel with a goal of attracting more than 1 million annual visitors. “Nobody can tell me that we can’t create an environment with land we already own, in conjunction with the private sector, to create a north-south-east-west destination.” The goal is to attract multiday visits versus a couple of hours, he adds.

Simmons emphasizes that such a grandiose plan, which would require a $200 million investment, is many years away. Her plan is to take smaller steps to grow the zoo and show it can be a strong economic driver for the state. Her Akron experience showed the need to build momentum gradually and prove that the institution can deliver on its promises.

“We’re trying to turn things back around, integrate education programs and great experiences,” Simmons says, “and make our legislators see that we are spending their money wisely. … I do believe that as steps are taken to move toward developing the zoo, we can become a major destination along the Eastern Seaboard.”