The North Carolina Ports Authority is seeing an undisclosed number of cancellations of scheduled shipments from some of the state’s biggest trading partners, a spokesperson says. 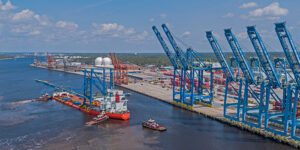 “North Carolina Ports continues to operate on a normal schedule and does not anticipate any changes to operations at this time,” says Bethany Welch, senior communications advisor.  “In regards to our business, we anticipated seeing a lull in business, like many other U.S. ports, due to the extension of the Lunar New Year because of coronavirus. We are experiencing blank sailings as a result, which primarily impacts our Asia container services.”

Blank sailings refer to scheduled shipments that were cancelled by the carrier, meaning they won’t show up to load or discharge cargo, often because of low demand. She declined to provide specific details on how volume has been affected.

The coronavirus impact is certain to reduce the $15 billion in goods moving through the state ports and, most likely, its $680 million contribution to state and local tax revenue.

The authority will have a better idea on the effect in coming weeks, Welch says.

Japan, Vietnam and Singapore also rank among the 11 biggest importers, based on 2019 statistics.

Trade with China normally makes up about half of the containerized goods flowing through California’s giant ports in Los Angeles and Long Beach. Chinese factories, which had largely shut down earlier this year because of the coronavirus, are now operating at about 40% of capacity, so the two California ports expect a 15% decline in cargo volume in the first quarter of this year, the Los Angeles Times reported.

Current conditions aren’t affecting the N.C. ports’ $200 million infrastructure improvement project, which is proceeding on schedule. The basin expansion and refrigerated-container yard projects are expected to be completed by June, Welch says.

The authority is working with local, state and federal agencies to ensure safety and security of employees, she adds.