One hundred and eight consecutive months of U.S. economic growth  marks the second-longest economic expansion since 1844, and UNC Charlotte professor John Connaughton doesn’t see that changing for a long time.

At the UNC Charlotte Belk College of Business’s mid-year economic update sponsored by Charlotte-based Barings money management firm, Connaughton said the N.C. economy will advance by 2.7% this year and by 2.8% next year, reflecting the 10th year of “modest but sustained economic growth.”

In 2018, North Carolina is expected to add 113,00 net jobs with the strongest expansions in construction, with an increase of 7.6%; information at 4.5% and hospitality and leisure services at 4.2%.

Charlotte area housing is boosting consumer confidence with home values increasing by 6.4% in the last year, Connaughton said. “The willingness of customers to purchase big ticket items gives a sense about how consumers feel about being able to replenish savings or take on a payment plan.”

Despite North Carolina’s solid growth, the state’s unemployment of 4.3% in May remains higher than the national average of 3.8%. Connaughton expects the N.C. to decline marginally over the rest of the year. 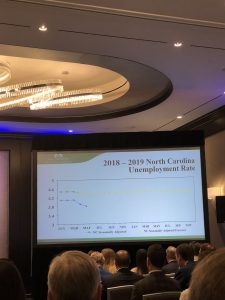 North Carolina unemployment rate of 4.3% is slightly lower than the national average, though this is expected to decline over the next year.

Potential negative signs cited by the economist include rising U.S. trade deficits and higher gas prices. “Every time gas goes up $.50, it begins to come out of consumers’ pockets,” he said.