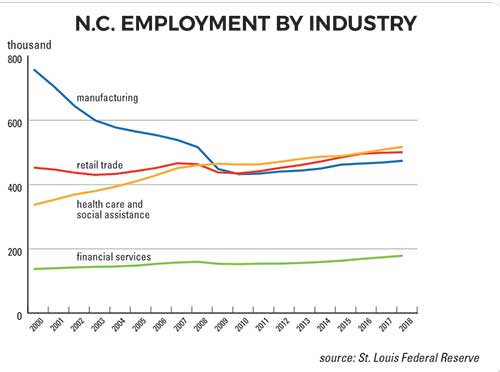 Losing 41% of its employment since 1997 might suggest that North Carolina’s manufacturing sector has crumbled. But the truth is that the state’s manufacturers have shown remarkable resilience in doing much more with less, reflecting the dramatic impact of automation on the factory floor. Total output has increased 59% during that period, according to the Federal Reserve.

North Carolina’s 475,000 manufacturing employees still represent 10.8% of the state’s workforce, more than any other sector except health care and retailing. Meanwhile, manufacturers’ $102.5 billion contribution to the state’s gross domestic product trails only financial services, notes the National Association of Manufacturers.

Keeping the momentum will most likely require continued improvements in technology because manufacturers are facing serious labor shortages, many experts say. Nearly 3.5 million manufacturing jobs will need to be filled nationally over the next decade as an estimated 2.7 million baby boomers retire, while another 700,000 jobs are expected to be created, according to a 2015 study by the nonprofit Manufacturing Institute and Deloitte financial-services consultancy. As many as 2 million jobs will likely go unfilled through 2026 due to a lack of science, technology and math skills, fewer technical education programs in public schools, and negative perspectives of the industry, studies show.

Manufacturers are fighting back with new ways to attract and retain employees and shake off stigmas to help their businesses survive. North Carolina is seeing an increased emphasis on matching education programs with manufacturing needs across the state as well as more outreach through plant tours, apprenticeships and interaction with the community, says Preston Howard Jr., president of the North Carolina Manufacturers Alliance, which represents 44 companies including 3M, Nucor and R.J. Reynolds Tobacco.

“I think many folks today, especially young people, picture a manufacturing site to be like the old steel mills and oil refineries and chemical plants of the 1950s and 1960s,” Howard says, “Most of today’s manufacturing sites look nothing like they picture.”

Manufacturers are boosting pay to become more competitive in recruiting workers. Roughly 80% of industry executives say they’re willing to pay more than the market rate or increase pay to attract employees, according to NAM. Manufacturing wages in North Carolina averaged about $28 an hour, or $58,000 a year, in 2017, federal studies show.

Unfortunately, about 56% of manufacturing workers are actively looking for or willing to accept another job because of job dissatisfaction, according to the Work Institute’s 2018 Retention Report. The picture is even bleaker when looking at efforts to entice millennials into the manufacturing workforce. Only 34% of North Carolina’s manufacturing employees are younger than 35.

Denise Ball, a workforce development specialist at Cleveland, Ohio-based Tooling U-SME, says the top reasons for turnover are a lack of career development opportunities, difficult work-life balance, bad managers and health concerns. According to Ball, younger employees, especially millennials, value company culture and look for benefits beyond time off and insurance, which she says may require a shift within some manufacturing firms. Younger workers are seeking clear career paths that align with pay, the ability to learn new skills and more frequent feedback. Even little office perks such as snacks in the break room can play a big role in appealing to employees, she says.