The coronavirus crisis created unprecedented disruption for the state’s colleges and universities, requiring a rapid conversion from in-person instruction to alternative-learning methods. North Carolina reported its first case of the respiratory disease on March 3 and within eight days, the UNC System Board of Governors mandated the 17 campuses start teaching online. By March 23, fewer than 10% of students remained in student housing, and the system’s roughly 250,000 students were attending lectures behind computer screens.

Many UNC courses are already taught online, which gave some experienced students and professors a leg up in the transition. But to help newbies, the system produced a 35-page guide assembled by dozens of faculty and administrators that included tutorials for planning lectures, teaching methods and vendor recommendations. It linked to how other U.S. universities are adapting, plus tips for time and stress management and how to work from home effectively. 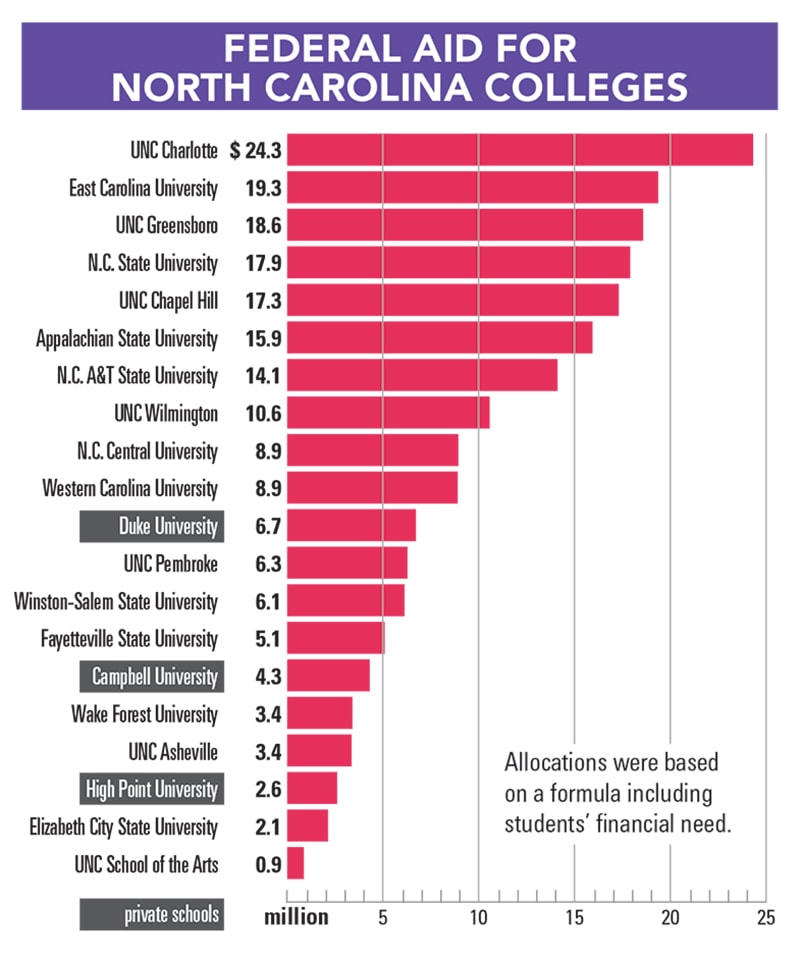 The crisis has prompted dramatic changes in academics and admissions. UNC campuses switched to a “pass/fail” grading scale for both graduate and undergraduate courses, with no effect on students’ grade point averages. Those earning a C- or above can receive a “satisfactory” mark and earn course credit.

The system also made it easier for students to get accepted, citing a shorter standardized testing schedule because of the crisis. Students with a minimum 2.5 weighted high school GPA or a combined SAT score of 1010 are now eligible to attend a UNC school. Previously, both minimum GPA and test scores were required.

The switch to online courses isn’t changing tuition prices, though in-person classes have been more expensive. A traditional semester with nine to 11 credit hours at N.C. State University is priced at $3,412 for in-state students, versus $2,131 for nine credits online — a 60% difference, according to an April report by the Raleigh-based James G. Martin Center for Academic Renewal. “Many students who haven’t taken online classes before might not even be aware of the price difference. Yet, N.C. State has said nothing about a partial tuition refund,” wrote Megan Zogby, a Martin Center intern.

UNC campuses are offering about $125 million of prorated refunds for parking, housing and food services. But the last thing universities need is to refund tuition fees, given mounting financial pressures. In mid-April, the system board delayed plans to boost tuition for the 2020-21 school year, because there is so much uncertainty over the crisis’ impact on the state budget and fall enrollment. System Board Chairman Randy Ramsey says he probably won’t favor tuition hikes this year.

UNC campuses are moving summer sessions online and cancelling camps, which will further reduce housing, food service and other revenue. The system said on April 29 that campuses expect to reopen in August with chancellors receiving flexibility in taking precautions such as staggering academic calendars or reducing housing and classroom density.

Higher ed experienced significant blows during the recession of 2007-09 when state appropriations, philanthropic contributions and endowment returns plummeted. The pending crisis could be even more troublesome, says Paul Friga, clinical associate professor of strategy and entrepreneurship at UNC Chapel Hill. The impact of the decline will vary widely by school, but a March survey of 142 university chancellors and presidents by his ABC Insights consulting firm found 70% expect revenue to decrease by at least 10%, he says.

At the Chapel Hill campus, revenue declined by 25% during the last recession. That would equate to about $575 million in 2020, out of $2.3 billion in operating revenue, Friga says. “The thing that’s probably most troublesome is how much we’ve increased tuition” since 2009, rather than focusing on expenses, he notes. The average tuition at public four-year colleges in North Carolina rose 45% between 2008 and 2018, versus 36% nationally. Still, North Carolina’s public universities charge among the lowest in-state tuition in the U.S.

To make up for the expected shortfall, UNC says it is tightening its belt. Though final plans are in flux, the system in April slashed a previous request for a 6% increase in annual state funding by 50%, or $185 million. Plans for $630 million in new buildings and other capital projects that had been approved by lawmakers are on hold. But it also asked for a one-time, $45 million payout for expenses and lost revenue.

In early April, federal officials approved $378 million to assist the state’s 142 post-secondary institutions, including $189 million for emergency student grants. It was part of a national, $14 billion bailout for higher education. U.S. universities are seeking as much as $85 billion more.

Some trends favor UNC amid the pandemic. Financial pressures may prompt many students to bypass more expensive institutions, Friga says. Moreover, higher unemployment typically correlates with rising enrollment at both community colleges and four-year institutions.
Private colleges have responded in like fashion, says William Downs, president of Gardner-Webb University in Boiling Springs. “We’re all trying to protect our students’ health [and that of our faculty and staff] while maintaining a high level of instructional continuity.”

Gardner-Webb, which has enrollment of 3,500, is mainly utilizing Blackboard, Zoom and Kaltura for learning-management software, video lectures and cloud storage. The university already had much of the infrastructure in place because of 14 existing online programs, while it has required professors to be certified for the Blackboard learning platform, Downs says. Gardner-Webb spent $20,000 on additional licenses and hardware in March.

Having a small student population and being private has advantages, despite not receiving state support, Downs says. “A private university can be a bit nimbler in our responses, we can move a bit more quickly, and we don’t have to wait on approval from a system office.”

Friga says universities should see the crisis as an opportunity to disrupt the industry. “If you just get negative and constrain to get through something, you don’t take advantage of the opportunity to make good changes,” he says. Investments in greater efficiency and innovation should be top priorities rather than cutting investments in technology, research and development. He expects more mergers, while some larger organizations with big online programs, such as Arizona State University, will grow at others’ expense.

“If done properly, [the crisis] can lead to positive outcomes and flexibility for students and faculty alike,” Friga says. “This is an opportunity for innovation. We can’t be incremental, we shouldn’t be incremental. We need to use this opportunity to make the changes that better suit the market.”

SBTDC: How to “quarantine” your business