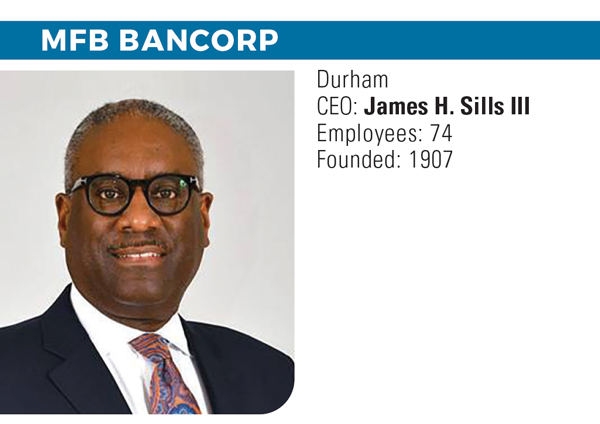 The pandemic turned out to be a growth opportunity for the nation’s second-oldest minority bank, CEO James Sills III says. “The year 2021 marked the best year in our history, in terms of total asset, loan and deposit growth, and total income over a two-year period,” he says. Assets jumped from $264 million to $372 million from 2020 to 2021.

Mechanics & Farmers Bank has faced lots of stressful circumstances since its formation more than a century ago. “We were founded to help farmers, mechanics, entrepreneurs grow their businesses at a time when most people of color — African-Americans — couldn’t get access to credit,” says Sills, who has been CEO since 2014. “There’s a lot of pride in our institution, and we’re still carrying on that mission today.”

The Durham bank would become a pillar of North Carolina’s Black Wall Street in an era when similar communities elsewhere suffered. In 1898, white mobs killed an estimated 60 Blacks and destroyed many of Wilmington’s Black-owned businesses. Two decades later, Black businesses in Tulsa, Okla., suffered a similar fate with more than 100 people killed and thousands of homes and businesses destroyed.

Sills says M&F’s social mission remains similar to its beginning days, but attitudes are dramatically different. The CEO points to equity investments in the past year by Wells Fargo, Bank of America, JPMorgan Chase, and Citigroup, and a recent $50 million deposit by grocery giant Food Lion. Those deals are aimed at expanding M&F’s ability to nurture growth of its minority-owned business clientele.

“We still have a lot of support from mom-and-pop businesses,” Sills says, “but large institutions see us as a means of reaching their grassroots. They understand we’re closer to the entrepreneurs in the communities we serve.” With branches in Charlotte, Durham, Greensboro, Raleigh and Winston-Salem, M&F lends out nearly three-fourths of its deposits to local businesses and consumers. It made about 800 loans totaling $50 million in the federal Paycheck Protection Program during the early months of the pandemic.

A banking technologist by training, Sills joined the bank after holding a cabinet role in Delaware state government. His father was the first Black mayor of Wilmington, Del.
While M&F’s improved financial strength is welcome, their publicly traded bank faces the challenge of remaining minority-owned. African-Americans now control about 70% of its shares, a percentage that has declined in recent years. The transactions with the megabanks included limits on their ownership stakes.

“As long as we stay about 51% minority shareholders, we’ll be considered minority,” he says. It’s a concern his predecessors likely never faced.