(This story was updated to include company comment about potential plans for the property.)

Charlotte will soon lose another piece of its soul with the closing of the Regal Manor Twin Theater adjacent to Charlotte’s Eastover neighborhood. Opened in 1947, it’s the oldest movie house in the city, but property owners have been plotting a mixed-use development to replace a strip center that includes a Panera Bread outlet, nail salon and other retailers, according to Charlotte real estate sources. It has a can’t-miss location on busy Providence Road adjacent to perhaps North Carolina’s highest-income neighborhood, a five-minute drive from downtown Charlotte.

“EFC is proud to have been a part of the long legacy of the Manor theater, first as operators and more recently as landlord,” he said in a prepared statement. “As owners of the property for over 75 years, we are going to carefully consider our alternatives and be very mindful of the importance of this property to Charlotte.” 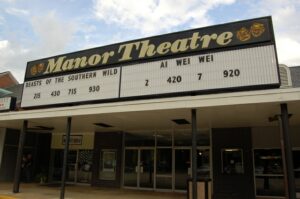 Losing the Regal Manor Twin Theateris a big blow to Charlotte because of its importance to the town’s movie fans and its historic value, notes Mickey Aberman, a lawyer who leads the nonprofit Visart Video, one of the city’s last video-rental stores. It also sells movies and memorabilia. “There are some places that are iconic in Charlotte and when we lose them, we lose a piece of our soul,” he says. “Every time one of those gets replaced with something that is sterile, we lose something. I’m really sad.”

The property owner, Eastern Federal, is owned by the Meiselman family, which has real estate holdings in North Carolina and Florida. Best known for a cinema chain started more than 70 years, EFC sold its 21 theaters to industry giant Regal Entertainment in 2005. Carter Meiselman, the third-generation leader of the business, diversified into private equity through Fenton Place Capital. According to its website, its investments include Raleigh-based Bandwidth, which went public in 2017 and is now valued at more than $2.5 billion.

The Meiselmans’ Charlotte property holdings formerly included a College Street site where Duke Energy is building a 39-story office tower to replace older space nearby. The utility bought the property in 2017 for $27 million, the Charlotte Business Journal  reported.

The Meiselman name may be best known among North Carolina lawyers. That’s because a bitter family dispute in the 1970s turned into a lawsuit between brothers Ira and Michael, leading to a landmark 1983 N.C. Supreme Court ruling related to minority shareholder rights. The case is a staple for N.C. law students. Carter is the son of the late Ira Meiselman.