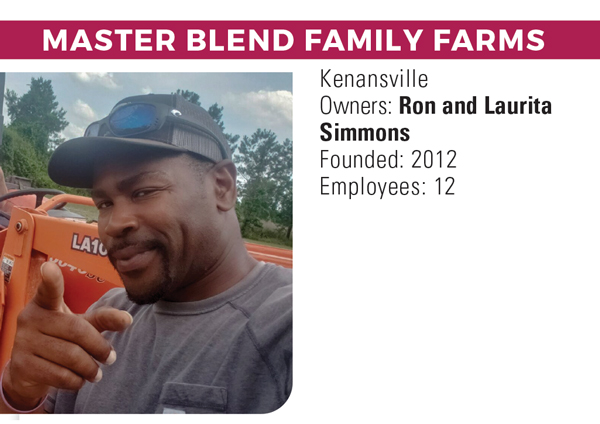 Master Blend has thrived for a decade because it has a niche. Eggs from cage-free chickens are increasingly common. But who in the world of industrial pork has heard of pasture-raised pigs, free to have a refreshing mudhole wallow on hot days and shift to greener plots when grass in one goes thin?

“He got the grandkids together, sat us down under the apple tree in our yard and said, ‘Life will be hard, but never complain about what you don’t have,’” he says. “‘The only one that controls your destination ultimately is you.’”

Simmons, 39, didn’t grow up in farming, but his wife’s father, James McGowan, now in his 80s, had raised pasture hogs for 30 years but stepped back in 2012. “I asked him if I could get the business back up and going,” he says.

Old farmers find nothing unusual about letting hogs run free until slaughter, but it hardly fits the industrial model. “I asked them a million questions,” he says. “I decided if we used their wisdom, we could avoid pitfalls.”

He isn’t mired in the past. Master Blend markets its pork online, has a retail store and food truck, and sells to local restaurants. It increasingly uses QR codes to ensure smartphone users that Master Blend products contain no growth hormones, steroids, antibiotics or pesticides. The farm is certified by A Greener World, a nonprofit that advances eco-friendly

Master Blend is one of fewer than 1,600 Black-owned farms left among the state’s 46,000. Simmons credits its success to help from state agricultural extension agents. He teaches courses at N.C. A&T State University, supports 4-H and hosts youth tours.

For those reasons, he was chosen the state’s Small Farmer of the Year in 2018.