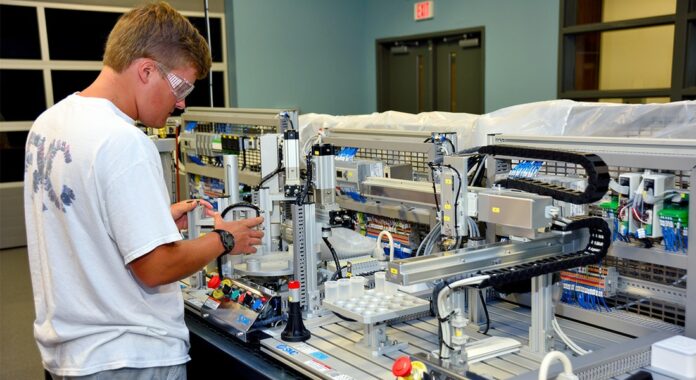 Manufacturers are growing in North Carolina and need skilled workers

Parents want their children to succeed, and most have become conditioned to believe that can only be accomplished with at least a four-year degree from a college or university. More than 44% of the about 97,000 students who graduated from North Carolina public high schools in 2014, the last year for which figures are available, planned to enroll in a four-year program, according to N.C. Department of Public Instruction. That’s increasing demand at North Carolina’s public universities, which have become more selective with admissions. UNC Chapel Hill’s admissions rate was 26% in 2016, for example, while N.C. State University’s was 43%, according to their websites.

But there’s an alternate route to success, and it doesn’t require a four-year degree.

“There are great opportunities in manufacturing,” says Lisa Chapman, N.C. Community College System’s chief academic officer and senior vice president for programs and student services. “They include positions that support family-sustaining wages, good benefits and cleaner work environments than those of some manufacturing companies in the past. We need to more effectively communicate these expectations to K through 12 students and their parents so that they not only know more about these opportunities but also how to academically prepare for them.”

Manufacturing is important to North Carolina. Its total economic output was $100.1 billion in 2015, according to Washington, D.C.-based trade group National Association of Manufacturers, up from $98.3 billion in 2013. The sector’s workforce is the South’s largest, about 460,000 as of March, according to the N.C. Department of Commerce. But the growth means manufacturers need more workers. A study by New York-based Deloitte LLP and Washington, D.C.-based Manufacturing Institute — the research arm of National Association of Manufacturers — predicts that about 2 million U.S. manufacturing jobs will be vacant by 2025. Those openings will be caused by baby boomers retiring and the search for more tech-savvy employees. Concerned about the looming labor shortage, manufacturers are taking steps to fill the talent pool. They are working with state agencies, schools and colleges to grow the workforce through recruitment and retraining. But it won’t be easy.

While the reality of manufacturing is positive, negative perceptions are widespread. When the Deloitte and Manufacturing Institute study asked millennials to rank seven domestic industries, they put a career in manufacturing last. They aren’t alone. Many people — including parents of high-school students — see factories as dark, dirty, noisy places where jobs offer little advancement and paltry paychecks. But in 2013, the last year for which such figures are available, the average annual salary for manufacturing workers in North Carolina was $66, 427, according to the manufacturers association. Nonfarm employees earned $44,165 on average that year.

Many of today’s manufacturing jobs require skills that are learned through at least a high-school degree. That’s no more apparent than in the disappearance of the assembly line worker, which at one time was an easy job to land because it didn’t require many skills. Between 2000 and 2016, employment in this occupation dropped 15%, according to a May Congressional Research Service report. In addition, while 53% of all manufacturing workers had a high school diploma at most in 2000, that percentage dropped to 42% in 2016, when more than one-third of workers had a bachelor’s degree. Those educated workers were more likely to be in research and development, architecture and engineering than production positions.

Manufacturers are hoping to capture the hearts and minds of North Carolina students who don’t foresee attending a four-year college or university. The public school system is helping them on several fronts. Many high school students are introduced to manufacturing careers through career technical education, formerly known as vocational education. Today’s version includes academic courses such as marketing and business. Chapman says students who enroll in more technology dependent concentrations, such as mechanical drafting, can follow a “seamless pathway” to a job or associate degree through a community-college program.

School districts statewide also are embracing the community-college system’s NC Works Career Coach Program. Chapman says coaches are hired by the local college, placed at nearby high schools and paid using funds from the State Board of Community Colleges. Proximity gives coaches a head start on helping students define career goals and find the community-college courses that will make them reality. While the program exposes students to manufacturing careers, she says coaches are trained to avoid a single approach. “It’s about the student first.”

Students also are touring factories and listening to manufacturing experts speak at their schools. Both are part of Manufacturing Day, an annual event coordinated by National Association of Manufacturers. School districts statewide participate every October, focusing on science, technology, engineering and math — STEM — aspects of manufacturing jobs. Raleigh-based North Carolina Manufacturers Alliance President A. Preston Howard is encouraged by the interest shown by students, typically eighth-graders and older. “We tell them manufacturing today is not the dirty place your grandparents worked in. And if you’re interested in science, engineering and math, there’s a place for you if you want it.”

Chapman says North Carolinians who want production-related jobs at manufacturers can better their chances of being hired by completing any of the community-college system’s 21 manufacturing programs that end in a degree, diploma or certificate. They cover traditional disciplines — including mechanical drafting technology, electronics engineering technology and welding technology — and more recent offerings such as bioprocess technology, which prepares them to work in pharmaceutical, agricultural and food factories.

Workforce training evolves with manufacturers. Chapman says community colleges continually update their classrooms and equipment. Some have built stand-alone training centers that house manufacturing-related degree and certificate programs and provide workforce training customized to local employers’ needs. Feedback from manufacturers and industry experts enables a college to replicate a work environment, including the specific computers, tools and instruments that students will use on the job, she says.

Gaston College’s 21,000-square-foot Center for Advanced Manufacturing is one of the state’s newest training centers. Inside Gastonia Technology Park near the college’s main campus in Dallas, it prepares students for jobs in several fields, including robotics, nuclear and alternative energy, and mechatronics, which combines electronics and mechanical engineering. “As the need for advanced-manufacturing training programs has expanded in our community, we have recognized the college needs to grow accordingly,” says Gaston College President Patricia Skinner.

Asheville-Buncombe Technical Community College provides customized training to Evendale, Ohio-based GE Aviation, says Kevin Kimrey, the college’s director of economic and workforce development. The company launched an expansion in 2013, announcing it would build a $125 million advanced composites factory in Asheville. Parts made of the light-weight material are used in their next-generation LEAP jet engines, which require less maintenance and fuel.

A-B Tech opened the Composites Training Center of Excellence, the only such center in the Southeast, to give GE employees the skills they need to work with the space-age materials. Today, the company employs almost 400 in Asheville, about 100 more than before the expansion and more than originally planned. “[The company’s] testimonies tell us that new employees are extremely well trained and prepared after they’ve gone through A-B Tech training, which is critical to quality, production efficiency and safety,” Kimrey says. “And well-paying, high-skill jobs have been — and continue to be — created in western North Carolina.”

Not all training happens on campuses. Apprenticeships, the time-honored use of mentors to teach skilled trades, are growing in popularity nationwide. They’re most often organized between companies and community colleges, but more high schools are getting involved. Apprenticeships accept high school juniors and seniors who meet academic and other criteria. Over the next four or five years, they work for a local employer and take classes at the partner community college.

Apprenticeship 2000 was one of the first regional apprenticeships in the state. It’s a collaboration among Central Piedmont Community College, 10 school districts in and around Charlotte, and several manufacturers, and it prepares people to be machinists, tool-and-die makers and injection-molding technicians. It’s joined by eight other programs statewide, including Gaston College’s Apprenticeship 321 and North Carolina Triangle Apprenticeship Program.

Wake Tech hosted the state’s first apprenticeship summit in January 2016. More than 100 attendees, including manufacturers, community college and school leaders, and students, gathered for workshops and roundtables. Speakers included Johann Fortwengel, an apprenticeship expert from Germany, which relies on an expansive and entrenched apprenticeship infrastructure to meet skilled workforce needs. NCTAP Executive Director Kent Misengades called the summit a success. “We have fostered a very productive exchange between businesses, workforce-development leaders and educators while showcasing our student-apprentices’ skills and what they’ve accomplished.”

While recruitment is important to developing the state’s workforce, manufacturers can’t ignore those already working in the sector. Community-college-based customized training can be used to retrain them. Companies can take advantage of the NC Works program, which is offered at no cost to them, through all 58 community-college campuses. To qualify for no-cost customized training, a company must demonstrate two of the following criteria: make an appreciable capital investment, deploy technology, create jobs by expanding its workforce or enhancing the productivity and profitability of its statewide operations, or enhance its workers’ skills.

NC Works offers other employment services, including recruitment, prehire programs, job-specific production training and courses in lean manufacturing methods. Although not technically an incentive, it can make the difference for companies that have the option of choosing where to locate or expand, says Maureen Little, the community-college system’s vice president of economic development. The lack of workforce-training costs can make North Carolina the clear choice. The program served 922 companies and 34,486 individuals in fiscal year 2016-17.

NC Works Certified Work Ready Communities also are adding to the manufacturing talent pipeline, says Lew Ebert, president of the North Carolina Chamber. Its foundation helps oversee the program, which ensures employers that residents have workplace skills. It’s based on the WorkKeys System developed by Iowa City, Iowa-based ACT Inc., the same organization that produces the popular college admissions test. Companies that participate in the program develop WorkKeys profiles, which make it easy to match qualified candidates to job vacancies. Ebert says 48 of the state’s 100 counties participate, with 28 officially certified. He says more than 350,000 job-seekers have been certified career ready, and more than 2,400 companies are participating.

Sometimes you have to bring it all together. Catawba Valley Community College President Garrett Hinshaw says about 5,000 school-aged residents and 6,000 people of prime working age are expected to leave Catawba County by 2034. That’s significant attrition in a county whose population was 155,000 in 2015, according to census data. Earlier this year, Catawba County commissioners approved $2.6 million for a big-picture effort to stem that outgoing tide.

K-64, whose name reflects the kindergarten-to-retirement lifespan of the typical worker, unites the county and its municipalities, three school districts, chambers of commerce, businesses and Catawba Valley. Its premise is simple: fuel the local economy with skilled labor by retaining young residents and retraining mature or displaced workers.

K-64 has several objectives. At the school level they include providing access to a computer or digital device for every student, teaching character development and leadership skills, training teachers to be tech-savvy and emphasizing work-based learning.

The program’s final objective is to help midcareer or displaced workers access retraining, education or training that ends with industry credentials. “This whole community is really getting focused on the things we need to address to set us apart [from other communities] in terms of talent development,” Hinshaw says.

Click here for a PDF of the Manufacturing section.