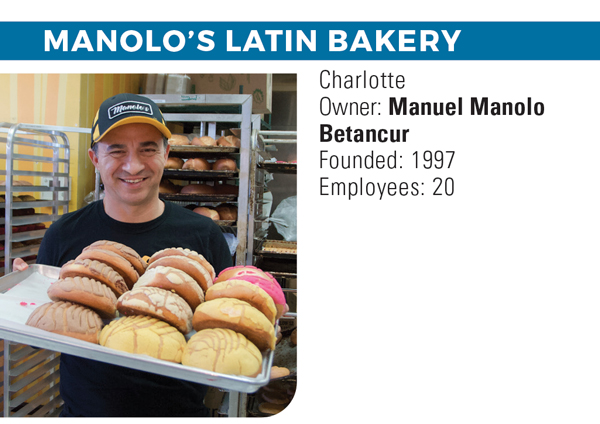 Happiness is delivered through experiencing one of the Manolo’s Latin Bakery’s specialty cakes, artisan breads or desserts. Offering Mexican conchas, Salvadorian empanadas, Tres Leches cake and other delicacies, there’s a savory or sweet option for all.

The bakery has become a staple in east Charlotte, with Betancur gaining respect as a major advocate for the state’s Hispanic community. Originally known as Las Delicias Bakery and Charlotte’s first Hispanic bakery, it rebranded to its current name in 2018 when Betancur became the sole owner.

The native of Colombia came to the United States in 2000, seeking a better future after serving in the Colombian military. He received a student visa and was awarded a scholarship to King University in Bristol, Tenn., which eventually led him to Charlotte in 2005 and his work with the bakery. Betancur was involved in delivery, sales and other key tasks prior to taking over the business.

Difficult times during the recession of 2007-09 prompted the company to enter the wholesale market, which Betancur says saved the business. The bakery has experienced significant growth in recent years.

With a focus on community, Betancur’s future plans include adding bakeries in other N.C. towns, starting a gelato franchise, and opening a vegan and gelato factory in Charlotte.

“I am in the business of happiness,” he says. “I make money creating happy memories. And of course, dreams come true in my place. The American dream is always still alive in
my bakery.”