In a section of his new autobiography, Lt. Gov. Mark Robinson highlights personal financial troubles that stemmed from losing a job at a furniture manufacturing facility in the wake of NAFTA in the 1990s.

I wondered if Robinson might not have become politically active if he’d been able to stay with the company and climb the corporate ladder. 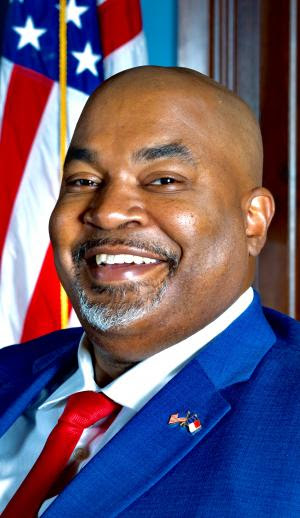 “That’s almost an unanswerable question,” he told me. “I certainly would have liked to pursue more opportunities with that company. I guess it just wasn’t meant to be.”

He says he became “politically aware” through conversations with a friend as an adult. “Growing up in our family, we never talked about politics,” he said.

I had a chance to speak with Robinson last week as he gears up for a national book tour when the book, “We Are the Majority: The Life and Passions of a Patriot,” is released next week. While we previously reported on the book in this space, here are some highlights from our interview, which touched on a number of business and political topics:

Robinson isn’t a fan of the state’s jobs incentives program, which has helped lure companies like VinFast, Toyota and Boom Supersonic. “I’m not really in favor of giving away the store, so to speak, or being bribed into bringing these companies in by giving them these so-called huge tax giveaways,” he said. “What I see working more than anything is actually setting the state up to be business friendly, lowering our corporate income taxes … relaxing regulations.”

But would a future Gov. Robinson put a stop to incentives deals? “I can’t say that. It would all depend on the situation and it all depends on what is going on at that time …We would never say never but we’re certainly more in favor of building an economy and a tax structure that works for business … instead of bribing them.”

The book says that schools “don’t need to be teaching” social studies and science in elementary grades, WRAL reported. I asked Robinson to explain further. “The main focus, I believe, in grade 1-5 should be reading, writing and mathematics. That doesn’t mean that we can’t teach lessons about science, it doesn’t mean we can’t teach lessons about history. I’m of the opinion that if we teach those things, the major goal there, the very focus should always be the reading component, the writing component and the mathematics component…. It’s not a matter of banning those things from elementary schools.”

Robinson’s book hints at a future run for governor, and he told me he’ll likely make a final decision on his 2024 election plans after the midterm elections and the holidays. But he’s already ruled out a run for Congress. “We have no plans whatsoever to run for anything on the federal level,” he said. “I really believe the way that we would help the state is by helping the state protect itself from the federal government. I believe that my place is right here in the state of North Carolina.”