Lowe’s Cos., the Mooresville-based home improvement chain, said today it will invest $153 million to develop a global technology center in Charlotte. The tech hub will be located in Charlotte’s South End neighborhood, where the company will occupy 15 floors of a 23-story, 375,000-square-foot office building. 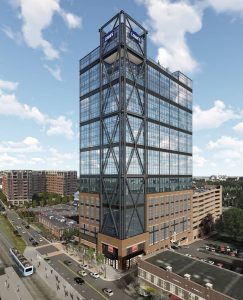 Plans call for 1,600 new high-paying tech jobs over the next several years and bring in about 400 more from the corporate headquarters 35 miles north in Iredell County. New positions will include software and infrastructure engineers, data scientists and analysts, architects, UX and UI professionals, and technologists with artificial intelligence and machine learning experience. Average salaries will be $118,000 annually, more than double the Mecklenburg County average.

The announcement is part of Lowe’s initiative to integrate and improve its technology to propel company growth.

Home improvement stores face much more difficult customer service issues than other retailers because their customers need to know how to complete projects, not just purchase products, Lowe’s Chief Information Officer Seemantini Godbole says. The new tech unit’s goal will be to improve customer service and offer new capabilities, both online and through an app.

The state is providing $54 million incentives paid over 12 years for the project, pending the company’s ability to reach job creation and investment targets. The state will also make investments in education and affordable workforce training as part of North Carolina’s goal to add 2 million holders of post-secondary degrees over the next decade.

Lowe’s will begin hiring for the positions immediately and fill the first 400 within the next year. It plans to break ground on the project within the next few weeks, with plans for completion in 2021, according to the company.