It’s time for a redefinition of what makes for success.

Why are we comfortable celebrating Black people as performers and athletes but not as leaders? That’s the question a good friend asked me recently, and I have to say, it’s been hanging around in the back of my mind ever since. During this year’s Black History Month, I reflected on the stereotypes of Black excellence in modern America, and so has my team at The Diversity Movement, with conversations around unconscious bias and with our inaugural Black History Now Awards. (The latter project cited 20 Black Americans who are making a difference in business, politics, arts and society.)

To cut right down to the core of the problem, I think we spend too much time talking about performers and athletes in general. Lebron James, Tiger Woods, Cicely Tyson, Denzel Washington, Beyoncé — those are common household names. But Marvin Ellison, Roz Brewer, Bozoma Saint John, Brenda Mallory, Victor Glover? They’re each at the very top of their fields, but they’re still almost completely unknown. (Ellison and Brewer are CEOs of Lowe’s and Walgreens Boots Alliance, respectively. Saint John is chief marketing officer at Netflix. Mallory heads the White House Council on Environmental Quality. Glover is the first Black astronaut on the International Space Station crew.)

Certainly, there are lots of complex and intersectional social issues at play, but I’m not interested in explaining how we got here. Instead, let’s talk about where we go now.

With a growing number of Black leaders across science, technology, construction, retail, marketing, health care and other major industries, we have a fantastic opportunity to flip the script on Black excellence at work. What is it, and who is doing it best? Which examples are we holding up for our children as we redefine what it means to be successful?

The answer lies in our definition of impact. If we want to raise children and young adults who work hard and use their failures as learning opportunities, we have to show them what’s actually achievable, because the truth is that being a professional actor, musician, or athlete is exceptionally unlikely. Instead of celebrating Denzel as an actor, we should emphasize his work in philanthropy. Instead of celebrating what Lebron does on the court, let’s talk more often about his charitable work. Let’s talk about Beyoncé as a powerful CEO, not only as a stage performer.

When we do that, we amplify the traits that really matter. We start to look around for more Black people who are doing hard work that makes a real social impact. Instead of celebrating Black success in mostly unattainable jobs, we start to celebrate the health care workers, teachers, public servants, engineers, and business leaders who are out there right now, forging paths we can actually follow. 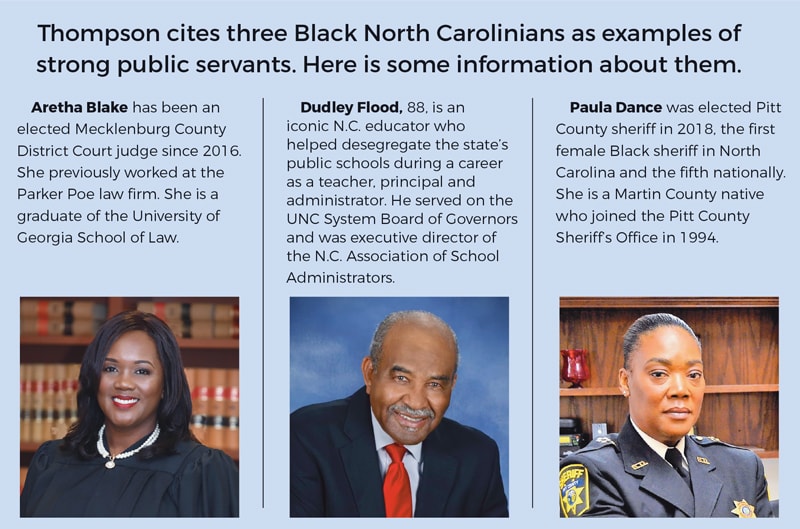 Here, I think I’d be remiss not to mention what it’s like to be Black in most of America: what Black excellence usually means. It’s what Kiese Laymon, a writer and professor at the University of Mississippi, calls “Black abundance” and what Time magazine describes as “an economic lifeline.” It’s what Black parents have been telling their children for decades: If you want to keep your place on the team, you need to overperform. Black excellence is a survival strategy, and that’s important because, as The Atlantic magazine titled a story, Black Workers Really Do Need to Be Twice as Good.

But doesn’t that mean these powerful examples have earned at least twice the applause and recognition?

These local examples inspire me to view Black history in a different light and to examine my own personal impact on the story of Black people in business as well. Remember that February shouldn’t be the only time you recognize the contributions of Black Americans to our society. Black history is American history, after all.

If you’re looking for powerful ways to integrate diverse stories and histories into your workplace, my team at The Diversity Movement has put together a Black History Month Programming Guide with recommendations on how organizations can recognize Black history throughout the year.

When you learn about someone you want to celebrate, someone who inspires you to make a bigger impact, I hope you’ll share their story with me on LinkedIn. Let’s amplify them together. ■

Donald Thompson is CEO of Walk West, a Raleigh-based marketing agency ranked on the Inc. 500 list of fastest-growing companies for the past three years. He is on the boards of Vidant Medical Center and TowneBank Raleigh. This column originally appeared in WRAL TechWire.