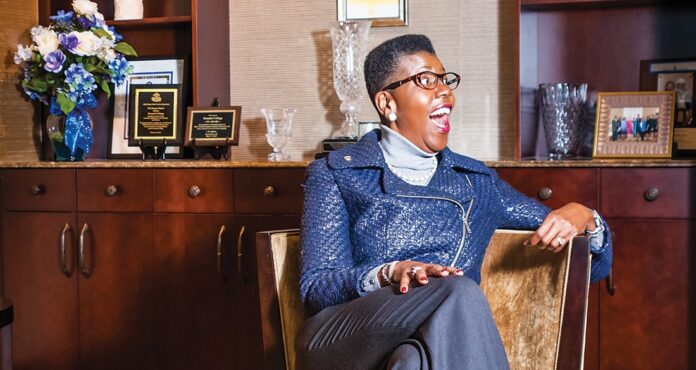 In 2016, we will update some of Business North Carolina’s most intriguing stories from the last 35 years. Been holding on to that issue from 1985? Wondered what happened to a cover subject? Send suggestions to dmildenberg@businessnc.com.

Year after year, many students board buses and planes bound for Bennett College sight unseen, the stories of a liberal arts school for black women handed down from grandmothers, aunts, mothers and sisters.

Tradition is the tie that binds at 107 historically black colleges and universities, of which North Carolina has 11, more than any other state. Ritual is part of the equation at Bennett’s postcard-pretty campus, a short walk from downtown Greensboro. The entire student body of about 500 women gathers for twice-weekly seminars and smaller “sister chats.” There’s a dress code, an attendance policy and men aren’t allowed in dorms at the university, which charges about $28,000 a year. And the traditions don’t stop at graduation — hundreds of alumnae, who call themselves Bennett Belles, make the annual pilgrimage back each May when seniors, dressed in all-white gowns, cross through the same gates they entered as first-year students known as freshwomen.

But with declining enrollments at all but three of the N.C. schools, HBCUs face a worrisome future. Elizabeth City State University’s student body has declined by 30% in the last decade, to about 1,900, and Moody’s Investors Service cut its credit rating in November to Baa1, one of its lowest investment-grade ratings. At Johnson C. Smith University in Charlotte, a former trustee is pushing for the resignation of President Ron Carter after the private school reported cumulative deficits of $17.5 million in 2013 and 2014.

Some of the same problems plaguing HBCUs crop up at Bennett, too. A 2004 cover story in Business North Carolina found Bennett on the other side of a crisis, just two years after the school was $4 million in debt. Twelve years later, President Rosalind Fuse-Hall has closed a $2.9 million budget deficit, one of her first tasks after arriving in 2013. Now, Fuse-Hall, who is 6 feet, 1 inch and displays infectious energy, is especially enthused about Bennett’s plans for a new major in entrepreneurship and a partnership with Wells Fargo & Co. that will enable the school to train students for securities-industry jobs.

The good news is that an October poll by Gallup and Purdue University says HBCU graduates are landing higher-paying, more satisfying jobs than their black peers who attend predominantly white institutions. In turn, they give back to their alma maters. An average 38% of Bennett’s alumnae gave money to the school from 2012 to 2014, the second highest rate of any HBCU. Nationally, only about 8% of college graduates write checks each year to their schools. Unfortunately, the checks to Bennett aren’t big ones: The 142-year-old college had an endowment of about $11.5 million in 2014 — by comparison, 178-year-old Davidson College has $680 million.

Fuse-Hall insists Bennett is hitting its stride, settling in at a comfortable number of full- and part-time faculty, about 60, but still a ways off from her enrollment goal of 800. That size would keep the school financially stable, while still giving students small classes and attention from professors.

On a brisk November morning, Tamara Jeffries stands in front of her research and information gathering class in what used to be Bennett’s heat plant, now the Journalism & Media Studies school. Sleek computers line exposed brick walls, and Jeffries uses a document camera to project a student’s paper on a screen, the student at her elbow, peering at the instructor’s comments in the margins. “Can I just see how much red is on there?”

Jeffries is critiquing the course’s culminating project, a research paper of about 60 to 80 pages, in front of the small class. Jeffries, a former executive editor of Essence magazine who specializes in health reporting, asks students to tackle a health-related topic. Students have done a good job collecting information, she tells the handful of women, but it’s time to weave the facts into a narrative. “Now, you’ve got to tell me the story.”

For senior Keirra Sedgwick, this class was a turning point her sophomore year when Jeffries handed back her research paper with a blunt, “What is this?” After avoiding such projects in high school, there was no hiding at Bennett, where her largest class totaled 30 students.

“Bennett saved me from myself,” says Sedgwick, who suggests she would have failed at another school. Students at Bennett routinely say the school found them. Many, like Shemiah Curry, Bennett’s student government association president, planned on attending Spelman College in Atlanta, the nation’s only other remaining women’s HBCU.

Instead, as a college sophomore, Curry got on a plane from Chicago for Greensboro, never having set foot in North Carolina. After a year at a large state university, she transferred to Bennett because “I knew I wanted my college experience to feel like a home.”

About 60% of Bennett’s students are from out-of-state, including Zion Daniel, who finished high school a year early in San Diego. A professor saw something in the shy 16-year-old and invited her to join the staff of Belle, Bennett’s quarterly magazine. Now a senior, she’s the editor, an opportunity that introduces her to women of all backgrounds and interests. “I live with them, I eat with them, I go to school with them,” Daniel says. “There are women here who do some really amazing things.”

Though President Fuse-Hall did not attend an HBCU, “they are in my DNA,” she says. Her father was a professor at Fayetteville State University when faculty families routinely lived on campus. Each fall, her family spent weekends attending homecoming celebrations at black colleges across North Carolina, from Raleigh’s Shaw University to Elizabeth City State. She purposely avoided jobs in education, going to work for the Securities and Exchange Commission after law school, later shifting into administrative posts at the UNC System, N.C. Central University and Florida A&M University. She married Jarvis Hall, who teaches political science at N.C. Central. They live in the president’s house, across the street from Bennett’s quad and steps away from Fuse-Hall’s office. Their daughter, Toya, is a teacher in the Teach for America program.

Fuse-Hall compares HBCUs to military academies or religious schools, a spectrum of choices at a time when some educators see increasing pressure for “professional” colleges. In many ways, HBCUs are a reminder of a painful history of segregation — Bennett’s initial purpose was to educate emancipated slaves. But, she says, “Out of pain comes progress.”