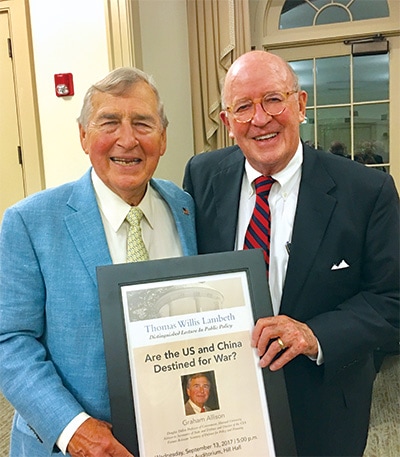 Ray Farris, right, and Graham Allison, a Harvard University professor. They were classmates at Myers Park High School in the 1960s.

Veteran Charlotte lawyer Ray Farris received an Order of the Long Leaf Pine award last week, recognizing his years of community service in the state. He was honored after a lecture at UNC Chapel Hill by his high school classmate, Graham Allison, a foreign affairs specialist and Harvard University professor. Started in 1963, the order is among the highest honors issued by North Carolina’s governors. Farris is perhaps best known for serving on the UNC Board of Governors from 1997 to 2009, a position appointed by state legislators. For the last 18 years, he has practiced estate planning law at Johnston Allison & Hord PA.

The UNC board has ruffled many feathers recently, particularly after 15 board members signed a letter criticizing system President Margaret Spellings’ actions regarding a Confederate monument at UNC Chapel Hill. The board also overruled Chapel Hill campus leaders by ordering a civil rights center affiliated with the university’s law school to abstain from litigation or legal assistance.

Farris, who has bachelor’s and law degrees from UNC Chapel Hill, says he’s disappointed in the board’s partisan tone.

“People I know who have served on that board weren’t politically oriented. Although there were more Democrats than Republicans, there was a concerted effort to have some representation by both groups. Right now, I don’t see that at all.

“Historically, the chancellors run the different campuses; the president runs the consolidated universities. It is unusual and inconsistent with history for the Board of Governors to make administrative decisions best made by the president.

“[Former system President] Bill Friday never would have tolerated that. Neither would [previous presidents] Dick Spangler, Molly Broad or Erskine Bowles. I think what they are doing is a terrible handicap to Margaret Spellings.

“I’m very concerned about the effect on the system, which is one of the great things about this state.”