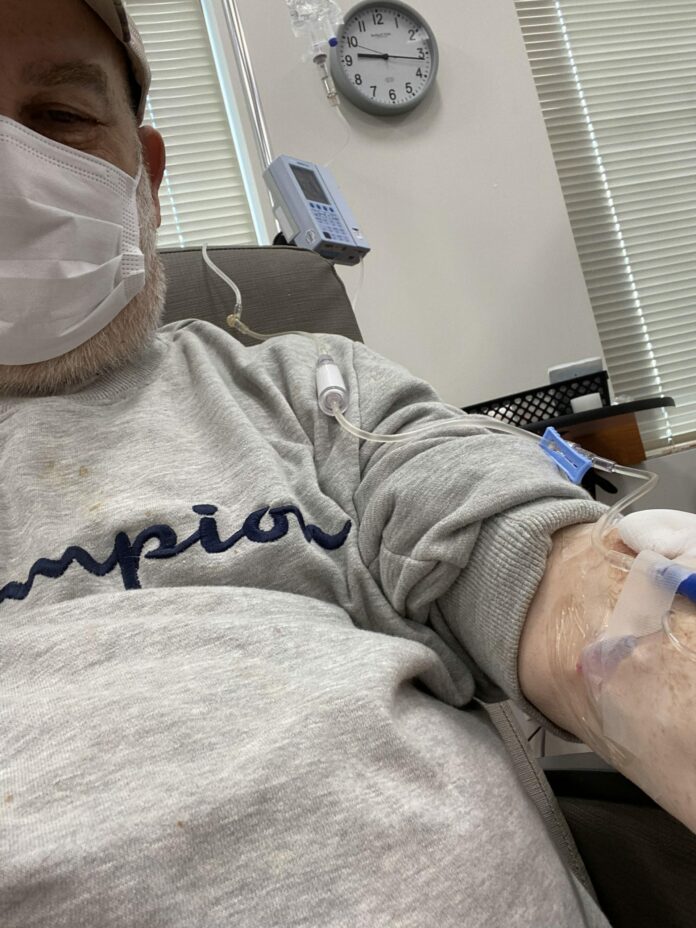 I started feeling under the weather Friday morning, Dec. 17.  As Friday went on, I kept feeling worse, and began running a fever.  A couple of days later I got tested and it came back positive for COVID.

For the past almost two years, I’ve been careful about wearing a mask, washing my hands and trying to distance. But in the days before I showed symptoms, I had been around folks unmasked at times. I was careless.

I have had two vaccinations and got a booster in late September, but COVID’s new strain, omicron, is very contagious, two to three times more than delta, and four to six times more than original strains of COVID.

As the weekend progressed, I was sneezing and coughing and had a headache. My appetite was gone. The fever persisted.

At the urgent care in Clayton Sunday, Dec. 19, the nurse did a test by swabbing the inside of my nose.  A little while later, the physician’s assistant came in and gave me the news.

Probably because I had gotten all my shots, my oxygen was at 99%.  But because of my age, 68, and what are delicately called “comorbidities,” I was eligible for monoclonal antibody therapy.

Monoclonal antibodies are intended to seek out the spike protein of the coronavirus that causes COVID and attach to it, blocking the virus’s ability to enter cells and slowing the infection. This is to keep things from getting worse and putting you in the hospital.

The next day, Monday, UNC Health found me a Wednesday morning slot about 15 minutes from my house in Clayton.  A lot of folks were trying to get the therapy, so getting in by Wednesday was fortunate.

When you test positive for a communicable disease like COVID, the government wants to get chatty right away.

Late Monday afternoon, I got a call from the Johnston County Health Department, which was trying to do contact tracing. I told them where I had been and mentioned that I had notified everyone. The tracer confirmed some basic information and wished me a Merry Christmas.

The contact tracers have been busy here. Around one in six Johnston residents has caught COVID since March 2020, more than 35,200 as of the middle of last week, including around 1,600 breakthrough cases like me.

Around 9 p.m. Monday, I got a text from the health department, from the NC COVID Community Team, wanting to know more information. I was interacting with a computer that was actually kind of smart.  It asked me when my symptoms first appeared, and said that based on the date I typed in, I was probably contagious as early as Wednesday, Dec. 15. Good to know.  It also reminded me to isolate until Monday, Dec. 27.

Monday night, all I could do was look at my phone, and that was an effort. My daughter texted for an update. Sneezy and dopey, I said.

Tuesday morning, I got another text from the COVID team, encouraging me to get the antibody treatment.

Wednesday morning, I was at the UNC Health clinic for antibody infusion.  I was led into a room with easy chairs and the staff set up the IV and made sure I was comfortable. The antibody solution began to flow, a mix of bamlanivimab  and etesevimab. Equally unpronounceable.

While I was getting the infusion, I received an email from someone I had been with the previous week. Since we met, he had been diagnosed with COVID. He had previously gotten all his shots and was doing OK.

After the infusion, I hung around for an hour so they could monitor for an adverse reaction, which there wasn’t, and they let me go. The process took two hours.

A couple hours after I got home, the U.S. Food and Drug Administration announced authorization for Paxlovid, a Pfizer pill you will be able to take at home to treat early infections, a lot easier than an IV. Supplies will be limited at first. It could result in a nearly 90% reduction in hospitalization and death among those patients most likely to develop severe symptoms, if they take it early. Sales of Paxlovid are projected at $18 billion next year.  I remember when we used to talk about a drug being a blockbuster at $1 billion a year.

Now, nearly two weeks after I caught this thing, I’m still a little sluggish. My appetite hasn’t come back, but no fever or other symptoms. I mostly feel lucky.

In March 2020, we were defenseless. Hardly any masks or tests. No vaccines. Not enough ventilators.  A lot of folks thought COVID wasn’t real. We’ve had more than 1.6 million cases in North Carolina, and more than 19,200 deaths. Nearly 1,700 COVID patients are in our hospitals.

Despite this, many folks have not gotten vaccinated. Of our state’s population 5 years and up, 34% has not gotten even one dose, according to the state health department dashboard.  Vaccines do not provide 100% protection. But they can reduce the severity of the symptoms.

Last week, I listened to Dr. David H. Priest, a senior vice president of Novant Health and an expert in infectious diseases, on a virtual press briefing. He said all but one COVID patient on a ventilator in one of Novant’s hospitals was unvaccinated. Those COVID patients who had been vaccinated typically were in their 70s and had one or more other health problems. They also usually had received their last vaccination more than six months ago, meaning they hadn’t gotten a booster.

There’s been some discussion that omicron may be more mild than previous variants. “But we don’t know that definitively just yet,” he said. “It still will remain a threat to anyone who does not have immunity from vaccination, or a combination of vaccination and previous infection.”

“Individuals who’ve not been vaccinated will be at the highest risk of severe cases of COVID with this variant as has been the case with other variants, including complications like hospitalization and death,” added Dr. Priest. “So, we anticipate over the next six to eight weeks we will see significant increases in the number of cases in our community, and that will include some breakthrough infections in vaccinated individuals, particularly those who have not had a third dose of an mRNA vaccine [Pfizer or Moderna] or a second dose following Johnson & Johnson vaccine administration.

“For many vaccinated individuals, these breakthrough cases are expected to be mild. But for those who are unvaccinated or older or have other comorbidities, the cases may be more serious. Because of the high numbers of still-unvaccinated people in our communities, this raises the prospect of another difficult January for our local hospitals, and we are preparing and bracing for that possibility.”

And then Dr. Priest said something that stuck with me.  If you have unvaccinated employees or loved ones, you should play them the first eight minutes or so of last week’s briefing, particularly this part:

“And remember, as we have said before, everyone will eventually have antibodies to COVID in their bloodstream, either through vaccination, getting COVID and surviving, or a combination thereof. There’s no dodging this. Particularly with omicron, it’s so infectious that we’ll basically all be exposed to it at some point. So being proactive and getting vaccinated can help prevent some heartache down the road. We continue to see tragic stories of individuals who regret not getting vaccinated who are quite ill in the hospital.” He said supplies of all monoclonal antibody products will be limited across health care systems. “There’s no guarantee that there will be any available given the volume of patients that are to be expected.”

Given this, plus the fact that the new Paxlovid is going to be scarce for a while, and the rapid spread of omicron, persuading the unvaccinated to get shots is important. I don’t know what words will work. Maybe a personal appeal from friends or family.  Maybe watching eight minutes of Dr. Priest.