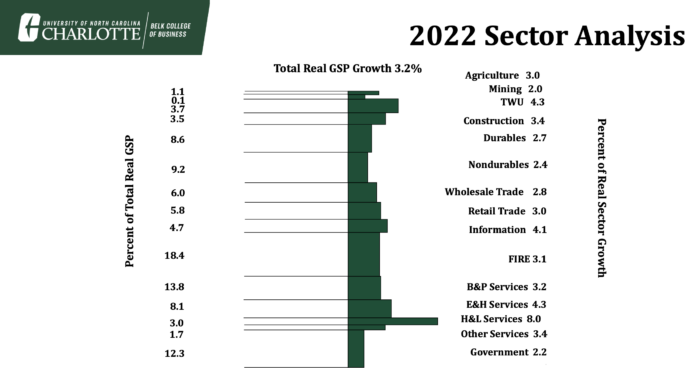 North Carolina’s economy is projected to grow 3.2% and add a net gain of 126,800 new jobs next year, a UNC-Charlotte economics professor told state legislators on Wednesday.

John Connaughton is director of the N.C. Economic Forecast, which UNC Charlotte’s Belk College of Business produces quarterly. He provided an analysis of the state’s COVID-19 economic recovery to the first meeting of the legislature’s Subcommittee on Use and Distribution on Federal COVID Funding. Sen. Chuck Edwards, R-Henderson and chairman of the subcommittee, said lawmakers want to learn from experts in order to better respond to similar emergencies in the future.

“We’re the first General Assembly and the first executive branch to have ever been tasked with responding to such a disaster,” Edwards said, adding that he wants the subcommittee to “preserve what we’ve learned and transfer it to future leaders in our state.”

In addition to Connaughton, lawmakers heard presentations from UNC Chapel Hill epidemiologist Justin Lessler and Anita Brown-Graham of the ncIMPACT Initiative, which has been studying the pandemic’s economic effects on local governments.

Here’s some other highlights from Connaughton’s presentation and his projections for 2022:

-Job and economic growth in North Carolina next year will be led by gains in the hospitality industry, including restaurants and hotels, as well as transportation/warehousing, education and health services.

-A key challenge for the state’s economy, he said, is that North Carolina’s labor force participation rate has dropped from around 61% in the months ahead of the pandemic to 59.2% in September. Adjust the unemployment rate to account for that factor, and the unemployment rate would be 5.9% instead of the current 4.2%. That’s fueling the labor shortages many businesses are seeing.

-North Carolina lost an estimated 12,300 jobs in August as the delta variant hit the state, but it rebounded in September with a net gain of 3,700 jobs

-North Carolina’s unemployment rate ranked 21st in the country in September, but it was ahead of most similar sized states.