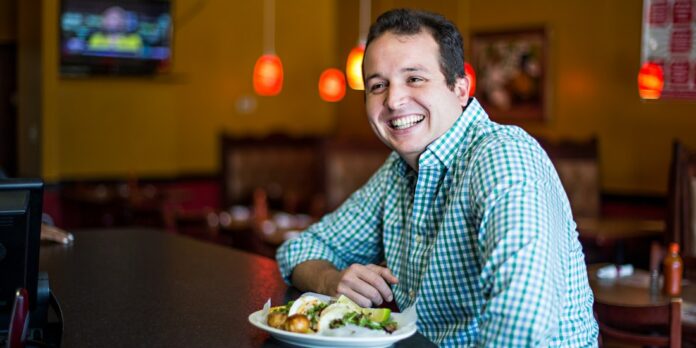 When the construction industry stalled in the recession, Dalton Espaillat, then a project manager and estimator for Christopher Bryan Co. in Charlotte, decided he needed a side hustle. With two friends, Espaillat, who was born in New York and raised in the Dominican Republic before moving to Statesville with his family at 15, bought a “hole-in-the-wall” Mexican restaurant on Charlotte’s Central Avenue, renaming it Three Amigos.

Operating a restaurant proved to be more of a challenge than the trio expected, and soon his partners bailed, leaving Espaillat to run the business. “All that debt was under my name,” he says. His only restaurant experience had been at Sonic, the Oklahoma City-based drive-in chain, first as a cook then assistant manager while he was attending college. “The food [at Three Amigos] was good, but everything else was horrible.” The servers didn’t speak English, the menu was in Spanish and the previous owners allowed patrons to get really drunk, he says. With the help of his family (his parents now live in Charlotte), Espaillat turned the restaurant around while managing to keep his day job in construction.

Today, Espaillat, 33, has mostly traded construction for restaurants: He still owns Three Amigos, but it’s his fast-casual concept, Sabor Latin Street Grill, that’s propelling his company’s growth. Raydal Hospitality LLC operates eight Sabor locations (pronounced sa-BOR) in the Charlotte region, with plans to open four more this year, including restaurants in Davidson, Huntersville and a flagship in downtown Charlotte. Average sales for each unit is close to $1.1 million. By comparison, sales at Chipotle restaurants averaged about $1.9 million in 2017.

After a failed effort to expand the Three Amigos concept, Espaillat opened the first Sabor in Charlotte’s Elizabeth neighborhood in July 2013. He replicated only the bestselling items from Three Amigos and streamlined the menu so that a new cook can learn how to make the food in two weeks. Operating a fast-casual restaurant — customers order at the counter, then staff members deliver food on metal trays — also requires fewer employees, reducing labor costs.

Sabor wasn’t an instant success. Though it offered the usual burritos, tacos and quesadillas, customers were less familiar with gorditas, Venezuelan arepas — fresh corn cakes filled with shredded chicken, diced tomatoes, onion, cheese and a creamy rosada sauce — and other Latin American fare. Everything at Sabor is made in-house, from the salsa to the handmade empanadas.

Continued success at Three Amigos allowed Espaillat to expand his business, adding Sabor locations in Wesley Chapel and Indian Trail, in suburban Union County. After about a year and a half, the business took off.

“I always said, if I get people through the door, they’re hooked, because I have a good product, I execute it very well and you cannot find it anywhere.” Though each location varies, Espaillat looks for 30% year-over-year growth in the first three to four years, then 10% afterward.

Espaillat envisions as many as 16 Sabor locations in the Charlotte area. He is also exploring franchising, with his eye on Durham, Raleigh and Winston-Salem as well as Charleston and Greenville in South Carolina. Helping launch the franchising business is Director of Operations Todd Bennett, Espaillat’s former employer who owned and operated several Sonic stores in the Mooresville area.

“My goal is to not go too far from where we’re at now, so we can support the franchisees properly,” Espaillat says. The flagship, expected to open this fall, will include a test kitchen for training staff and future franchisees. At 3,200 square feet, the restaurant will be nearly twice as big as other locations, which average about 1,800 square feet with 40 seats. A new corporate office above the restaurant will allow Espaillat to have more oversight.

“The way that I see it, [fast-casual dining] has to stay, because you cannot afford to go out to fancy restaurants all the time. We’re living in a society now where both partners are working, so you’re going to have to eat out a lot,” he says.

“My goal at Sabor is that you cannot make this food cheaper at your house. That’s been my price point.”