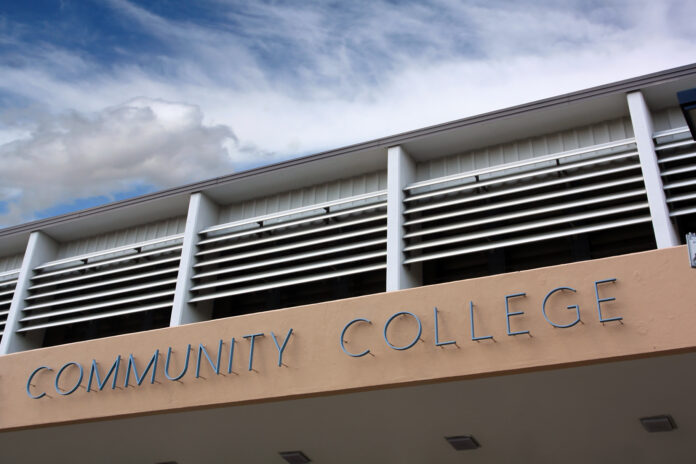 When Dr. Thomas A. Walker Jr. was named a senior adviser to UNC System President Peter Hans last year, it did not make a big splash. It should have gotten more notice.

For one thing, it was another community college guy at the headquarters that oversees North Carolina’s 16 public universities. Hans, who became UNC System president in 2020, had previously been president of the state’s 58-school community college system.

Dr. Walker, until joining the UNC System office in August, had been president of Wayne Community College in Goldsboro for five years. In addition to being Han’s senior adviser for economic development and military affairs, he is also a system liaison with the community colleges and K-12 schools.

He comes well-prepared for his new job. A 1984 graduate of UNC Chapel Hill with a doctorate in higher education administration from the University of Memphis, Walker worked in community college leadership in four states; he understands the role of the education system in economic development.  He grew up in Lumberton, in Robeson County, so he understands the challenges facing rural North Carolina. He ran a group of charter schools in St. Louis. And he spent four years on active duty as a young Marine officer.

I talked with Dr. Walker last week about his career and his new role, which underscores the importance of North Carolina’s higher education system in promoting economic development.

The Triangle’s three major universities — Duke, N.C. State and UNC Chapel Hill – helped create the region’s key economic engine more than 60 years ago, Research Triangle Park. But the decline of legacy manufacturing industries — particularly in rural areas — has created more economic urgency in recent decades.  The entire education system is focused on developing a workforce that can attract good jobs to the state.

The second major part of Dr. Walker’s job is the relationship between the universities and the military.  North Carolina has the fourth-largest presence of Department of Defense personnel — uniformed and civilian  — in the country. But the military is not just a major employer of current and potential college students. It is also a major source of funding for research and development, and the state has made increasing North Carolina’s share of defense R&D a high priority.  This is particularly true for the UNC System, which has a Military Affairs team focused on partnerships with installations for research and to improve access to education.

“The role that I am really trying to get my arms around [is to] provide some leadership for a system-level emphasis that can work across the economic development spectrum,” he says. “Whether it’s workforce, whether it’s research and innovation, whether it’s making us . . . extremely competitive, I mean the state, around site selection for not only new businesses, but also existing businesses who are looking to expand.”

A key UNC focus right now — with money behind it — is recruiting potential students who don’t fit neatly into the 18–22-year-old group universities have traditionally sought but whose growth is slowing.  There are hundreds of thousands of older North Carolinians, an estimated 643,000 between 25 and 54, with some college who never completed degrees. There are also, every year, around 18,000 veterans who leave the service in North Carolina. We’d like them to stay here and continue their education as they join our workforce.

The legislature appropriated $97 million for Project Kitty Hawk, an educational technology partnership under the leadership of the UNC System to substantially upgrade online programs now offered by our public universities. This is a big step because the universities serving the most N.C. students online in 2019, pre-COVID, were Virginia’s private Liberty and publicly held Strayer. East Carolina University was a close third.

The last two years have temporarily changed the way UNC schools have delivered courses. This may be the right time for the system to launch a more permanent online initiative, because the universities have had, in effect, a vast pilot project since March 2020 to see how digital delivery of classes works at scale.

“We believe, and I believe, that [Kitty Hawk] will fundamentally impact our service and offerings to veterans in substantial ways,” says Dr. Walker.  “This is primarily an online delivery platform that we’re developing that will allow us to really meet veterans and their families where they are, in terms of when they need to access educational opportunities.

“And I’m really excited about this. Because I believe that our military can also help us with some of our workforce challenges, particularly in technical-related areas. And everyone around the country is competing for workforce.”

Running community colleges has given Dr. Walker experience in workforce development because those schools focus tightly on the skills that local companies need — as well as businesses that economic developers recruit. Wayne Community College, for example, provides a lot of the welders in the surrounding coastal plain counties, so Dr. Walker and his staff had to know how many were needed, today and in the next few years. “We were trying to calculate how many more welders we need to get out, periodically.  How many more machinists do we need to get out, how many machine operators do we need to start producing.  Lots of moving parts there.”

The folks who oversee higher education systems that are similarly focused on economic and workforce development look at both their budgets and the STEM skills demanded by the economy and make decisions accordingly. The North Carolina legislature has recently allocated a lot of money to train more engineers and computer scientists. This is not universally popular with some liberal arts faculty, just as the push towards online has met resistance, but this is where things are headed.

Dr. Walker’s life has spanned the sweeping changes in North Carolina over the last six decades. He was born in 1960 in Lumberton, just as schools were slowly beginning to integrate. Only a few years earlier, outside nearby Maxton, members of the Lumbee tribe famously battled the Ku Klux Klan and drove them out of Robeson County.

Dr. Walker’s parents were both educators, graduates of Winston-Salem Teachers College (now Winston-Salem State University) before it became part of the UNC system in 1972. “My father was a school principal but I always admired how he treated everyone who may not have been at the level of life he was.” Thomas A. Walker Sr., who played football for famed basketball coach Clarence “Big House” Gaines (who coached on the gridiron for a few years as well) was also “an old-school father who essentially believed that once your son left home, he didn’t expect you to come back other than to visit on holidays.”

That old-school upbringing prepared him for the Marines, as did working in tobacco fields and construction while in high school. “I’d been around a lot of men who had done, for lack of a better term, heavy lifting.”

When Dr. Walker discusses the military in his new role, it is very personal. The Marines gave him direction. “I say all the time, the Marine Corps saved my life.”

While at Chapel Hill, undecided about his future, he signed up for the Marines’ platoon leaders course, which required two summers at Quantico, essentially basic training. After graduation, he became a tank platoon commander.

“Suddenly, here’s a country boy from Lumberton, North Carolina, who’s beginning to see the world and also was beginning to learn skills.” One skill he learned was how to plan a mission, communicate its details, and oversee it to completion.  The acronym in the Marine Corps is BAMCIS (pronounced “bam-sis”) — begin the planning, arrange the reconnaissance, make reconnaissance, complete the planning, issue the order, and supervise.

“I still use principles I learned when I begin planning a project,” says Dr. Walker.

Dr. Walker learned in Okinawa and Camp Lejeune, and in college positions in Missouri, Nebraska, North Carolina and Tennessee, to identify and appreciate key people.

“I had noticed a phenomenon among some second lieutenants that because you had a college degree, you might be a little smarter. But I was just savvy enough to know that whoever the staff sergeant or gunnery sergeant was running my platoon, he was really the one running the platoon. My role was to support their role and to support my Marines, who were under his leadership.

“That was my role as a leader. Not to be seen as someone in charge.” says Dr. Walker. And he believes that he has succeeded because he was more concerned with results than attention. “And now, sometimes, with some of the more strategic initiatives I’m involved with, I start out by saying, ‘OK, who needs to get credit? Let’s figure that out on the front end so that they get credit.’”

David Mildenberg - 06/15/2022 0
Someone wants to add toll lanes to the often-congested stretch of Interstate 77 between center-city Charlotte and the South Carolina state line. But that party doesn’t want its name in the public yet. So...
Read more
Share
Facebook
Twitter
Linkedin
Email
Previous articleEli Lilly makes a huge bet on North Carolina
Next articleDynamic diversity: 25 minority-owned companies excelling across the state