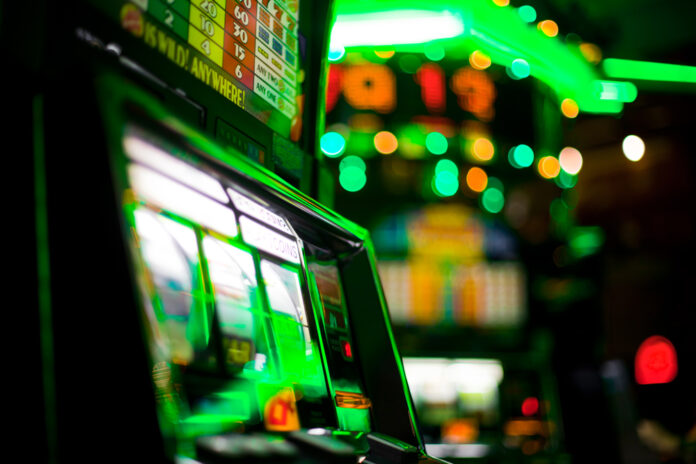 Most who come to the granite boulders of Crowders Mountain’s Pinnacle Peak in Gaston County risk nothing greater than blisters hiking its rocky trails. Others gamble more, rappelling or free-climbing its precipitous cliffs.

Within sight of the cliffs, just beyond Interstate 85 on the outskirts of Kings Mountain, Jason Brewer is playing for lower stakes. Inside the windowless, warehouse-like building, 1,000 slot machines entice casino visitors. He concentrates and spins.

Mega Spin stops on what players call an upgrade. “That’s $1,000,” Brewer says, sliding to the edge of his seat. He spins again and takes a deep breath.

“Another!” he exclaims as symbols on the screen align. Then another. “A jackpot!”

With as little drama as a grocery-store checkout, the machine spits out a paper ticket. Brewer hands it to a cashier and heads home to Winston-Salem with $2,037 in pocket. And an IRS Form 1099-MISC. “For taxes,” he laughs. “I paid ‘em.”

Officially opened in July 2021, Catawba Two Kings Casino has slated  $273 milion for a two-story permanent casino, 29-floor hotel, restaurants and other trimmings. Last winter, it doubled the playing floor to about 30,000 square feet. In September, it added sportsbook betting with 30 kiosks.

For gamblers like Brewer, who returns with his family monthly, it’s an unbridled success. “I do wish they’d get a little more upbeat music,” he says.

The 3,700-member Catawba tribe is staking much of its future on this casino, which expects to eventually have 5,000 slot machines. “We can improve health care, housing, education, scholarships, workforce opportunities,” says Elizabeth Harris, the tribal administrator.

But 15 months after the casino’s debut, it’s clear that Lady Luck had little to do with its development. Rather, its path was paved by the support of prominent Carolinas and U.S. politicians, various business figures and the persistence of Wallace Cheves, the main outside developer.

Now, because many of those affiliated parties do not have Native American genes, construction of a permanent casino has stalled, pending a probe by the National Indian Gaming Commission.

“The truth is now coming out,” says Richard Sneed, perhaps the casino’s biggest critic. The former U.S. Marine is the elected chief of the 14,000-member Eastern Band of Cherokee Indians, which operates two casinos in western North Carolina. The Cherokees tried for years  through lawsuits, Congressional testimony and political contributions to block a Catawba casino in South Carolina, where gambling is barred. Instead, the tribe went across the state line, where it didn’t hold reservation property.

“This is all about political dealings and backroom deals. It’s all out there now,” Sneed says.

Cheves bristles at such descriptions. The Catawbas “stood little or no chance of realizing their dream” of a casino without the expertise of his Greenville, South Carolina-based company, Sky Boat Gaming, he says. The Wofford College graduate started working in gaming in 1996 and has owned his own companies, including day-cruise casino boats, for more than 20 years. He started working on the Two Kings project in 2008.

“It’s well known that those who have opposed this project from day one have spent millions of dollars trying to influence Congress and trying to smear me and others with blatantly false and unsubstantiated accusations,” he says.

In their pursuit of the casino, the Catawbas and Cheves developed ties with South Carolina political royalty: U.S. Sen. Lindsay Graham and kinfolk of U.S. Rep. James Clyburn and former Governor Nikki Haley.

Graham has been an outspoken advocate for the Catawba casino. Cheves has donated tens of thousands of dollars to Graham’s campaigns and served on his finance committee during his unsuccessful run for president in 2016.

Clyburn’s brother, John, and Haley’s husband, Michael, received shares in Kings Mountain Equipment Supply, which gets 20 cents of each $1 in profit generated by the N.C. casino’s slot machines, the Wall Street Journal reported in July. John Clyburn consulted on the project for nearly a decade, while Michael Haley started advising on cybersecurity issues in 2018, the paper said. Nikki Haley opposed gambling as governor and says she didn’t promote the Catawba casino. James Clyburn says he never discussed the project with his brother.

Clyburn and Graham promoted legislation that made Two Kings possible after the Trump administration reversed its initial opposition to the project. Other legislative supporters that received campaign donations from the Catawbas and non-tribal members affiliated with the casino include Senate Majority Leader Chuck Schumer of New York, North Carolina senators Richard Burr and Thom Tillis, and political action funds connected to former President Donald Trump.

Federal Election Commission and Senate disclosure documents show the tribe paid more than $200,000 in the past two years to lobbying firms such as Washington-based Hobbs, Straus, Dean & Walker.

Graham believes the Catawbas have historically been treated badly, a spokesperson says. Representatives of Tillis and Burr say their support of the casino isn’t tied to campaign contributions. Clyburn’s press secretary, Hope Derrick, declined to comment.

The Cherokees didn’t want to lose their monopoly on Native American casinos in North Carolina. Since federal and state officials approved gambling in the mid-1990s, EBCI Holdings, the Cherokees’ business arm, has pumped close to $2 billion into Harrah’s casino complexes in Cherokee and Murphy.

The Cherokee casinos are among the most successful of the nation’s 532 Indian casinos. Native American establishments comprise nearly half of all U.S. casinos, and pack a $32 billion annual wallop for one of the nation’s poorest demographics.

EBCI is partnering with Harrah’s owner Caesars Entertainment on a $600 million casino and hotel complex in Danville, Virginia, 45 miles north of Greensboro. It’s expected to open in 2024.

He also estimates that Two Kings is siphoning $100 million a year from the Cherokee casinos. The new rival is adjacent to Interstate 85 and 35 minutes southwest of Charlotte.

“Cherokee was three hours and meant an overnight trip,” says Brewer, who typically visited a few times a year. “[Two Kings] is an hour and a half down I-85. We stay a couple of hours and go. Sometimes we leave a little money, sometimes we bring a little home.”

No proof of crimes in connection with Two Kings have surfaced. However, Justin Platt, spokesman for the National Indian Gaming Commission, which regulates Native American casinos, confirms the agency is probing financial transactions tied to Twin Kings.

“Our investigation is limited to requirements of the Indian Gaming Regulatory Act, including ensuring that the tribe maintains sole proprietary interest in its gaming operation,” he says.

The rules mainly limit percentages of revenue outside companies such as Kings Mountain Equipment can earn from casino contracts. Allegations that outsiders have muscled in on the casino “are not within the scope of the agency’s jurisdiction,” he adds.

The National Indian Gaming Act in 1988 formed the gaming commission as a watchdog to ensure non-tribal parties don’t take advantage of Native Americans.

Under North Carolina’s agreement that permitted the Cherokee casinos in 1994, the state’s Indian Gaming Revenue Fund gets 6% of live table revenue from blackjack and other games. That share will rise to 8% in 2032.

The Cherokee, under a plan approved by the federal commission, divides up gambling proceeds between the tribe and its 14,000 members. The tribe’s share goes to education, including cultural programs aimed at preserving and teaching the Cherokee language. The Eastern Band opened an $82 million hospital in 2015. Members get annual payments that last year came to about $6,600 per person.

Harrah’s management fee is less than 10% of total revenue, having declined steadily since 1994, Sneed says. It was originally capped at 30% of revenue.

The Catawbas are permitted only for electronic gaming, which doesn’t provide revenue for the state. The site is managed by Delaware North, a Buffalo, N.Y.-based company that operates more than a dozen casinos.

South Carolina attorney James “Wally” Fayssoux is the manager of Kings Mountain Equipment, which has supplied more than half the casino’s 1,000 slot machines. He and Cheves say their dealings with Two Kings are rigorously scrutinized by federal officials. Adds Harris, the tribe’s chief executive, “We’ve confirmed with the NIGC that there’s no investigation regarding alleged political favors.”

Fayssoux calls accusations of misdealing “most probably the result of a false narrative and being promoted by those who oppose the success of the Catawba and their casino.”

“Sky Boat and its principals prefer to deal in facts, not accusations,” Cheves adds. “The Cherokees are a good example of how tribes benefit, and it would be our hope that others would want to see other nations benefit as well.” ■ 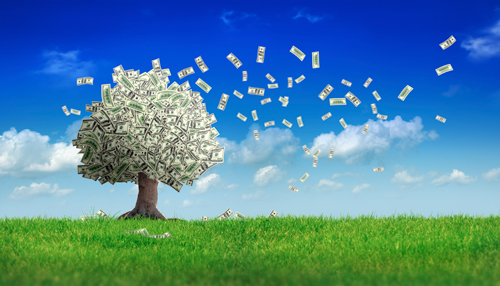 Some conservative members of the Catawba and Cherokee tribes may cringe at their involvement now, but archeologists and cultural historians say Native Americans have gambled for millennia.

In fields near the Cherokee headquarters in Swain County and river bottoms southwest of Charlotte along the Catawba River, it’s not unusual for archeologists to find gaming stones, polished rocks sometimes with holes, used by Native Americans in games resembling shuffleboard or horseshoes. Betting was common, say anthropologists, with stakes sometimes including bettors’ wives and children.

Links between the two tribes may have flowed along the Catawba River, which originates in western North Carolina. That ancient history is pertinent to today’s casino controversy, says Richard Sneed, the Cherokees’ elected chief. Under unrelenting pressure from white settlers, both tribes resorted to treaties that were repeatedly broken.

“The parcel of land the Catawba casino is on was actually Cherokee aboriginal land that we deeded to the state of North Carolina in 1777,” he says.

A treaty that the Cherokee signed with North Carolina in May 1777 failed to protect the Cherokees for long. In the Trail of Tears between 1830 and 1850, Cherokees were forced to Midwest reservation land at gunpoint. Thousands died. A few hid in the nooks and valleys of the Smoky Mountains, becoming the ancestors of today’s Eastern Band.

Meanwhile, by the 1970s the Catawbas numbered about 2,000, mostly low-income workers in textile mills in the South Carolina counties south of Charlotte. They gave up federal recognition as a tribe, and, along with it, millions in federal aid. Remnants filed a lawsuit, alleging that much of the 144,000 acres making up Rock Hill was on their land.

They dropped the lawsuit when granted federal recognition again in 1993, but are now subject to South Carolina law that forbids gambling.

“They were a terminated tribe,” Sneed says. “That was voluntary on their part.” After negotiations with the state and an appeal to the South Carolina Supreme Court failed, they switched their sights to North Carolina. “This whole dynamic of reservation-shopping is unprecedented.”

The U.S. Department of the Interior, which oversees Native American gaming, initially rejected the project in 2018. After Senator Lindsay Graham began lobbying, the U.S. Interior Department reversed itself, and approved the purchase of 16.7 acres in North Carolina to be held in trust for the Catawbas.

The Cherokees sued, but Congress took the matter out of the courts by passing the Catawba Indian Lands Act, which codified the Interior Department’s decision. President Joe Biden signed the bill. The Two Kings slots haven’t stopped ringing ever since. ■