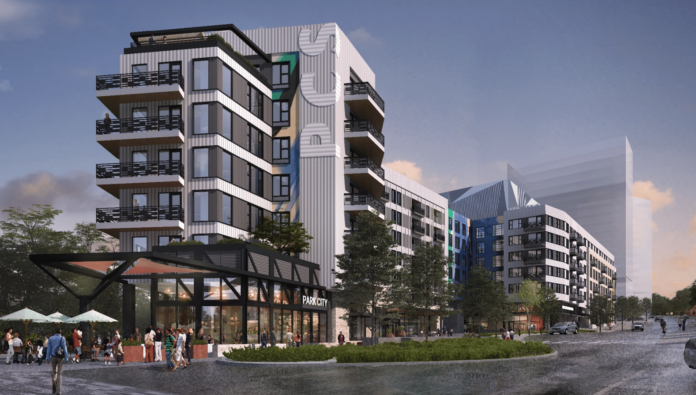 South Saunders Street has never been a particularly attractive gateway to downtown Raleigh. You get off Interstate 40, pass some tire shops, used car lots and old warehouses, and eventually the view improves when the downtown skyline appears in front of you.

That’s about to change as Kane Realty Corp. turns its attention from North Hills and downtown to the area directly south of downtown. The development firm led by John Kane announced details this week of two mixed-use developments that will start construction soon.

Park City South will initially be a seven-story, 335-unit apartment building with 18,000 square feet of ground-level retail and flex office space, sandwiched between South Saunders and the Rocky Branch greenway trail. Its major selling point is that it’ll be directly across from Dorothea Dix Park.

A news release from Kane describes the apartments as including “a robust work-from-home space; indoor/outdoor social spaces; and a full spa replete with a sauna, steam room and resistance pool; as well as a rooftop lounge and terrace facing Dorothea Dix Park’s ‘Plaza + Play’ First Phase.” Construction is set to begin by the end of the year, with the building opening in late 2023.

Kane will eventually build a second, high-rise building on the property with a mix of office, residential and retail. The height of that building hasn’t been determined yet, but zoning on the site allows for up to 20 stories.

Park City South is a few blocks north of the much-anticipated Downtown South project, a multi-billion-dollar development which is slated to include a soccer stadium. Kane is partnering with Steve Malik, owner of the North Carolina Courage soccer team.

It’s been slow to start, but Kane now has a timeline for the first two buildings: A six-story, 180,000-square foot spec office building and a six-story, 280-unit apartment building will break ground in the second half of next year. Each building will have about 14,000 square feet of ground floor retail.

The office building has an unusual feature: It’ll have mass timber construction instead of the usual concrete and steel frame. Kane describes this as a technique that “utilizes multiple, sustainably sourced, solid wood panels glued or nailed together as a low-carbon alternative to concrete or steel.”

Kane’s news release says the company will be announcing plans for other buildings in the first phase of Downtown South in the coming months. The Raleigh City Council approved the rezoning for the project last year, but it added limits on building heights, density and other factors after some controversy over how the project fit with the surrounding neighborhood.