Inside Clean Juice’s chic shops, customers watch smiling “juiceristas” build acai bowls and blend smoothies in an open kitchen. The space is trendy yet family-friendly, while the menu is creative and approachable. In addition to tried-and-true fresh juices and smoothies, it includes savory and sweet toasts, acai bowls, cold-pressed shots, seasonal bites, even a comprehensive cleanse program — all made from organic ingredients.

Clean Juice has benefited from more people seeking healthier foods, with the proof evident in the numbers. The Charlotte-based company recently opened its 80th store in just three years of franchising and snagged a ranking of No. 431 on the Inc. 5000 list, with 2018 revenue of $4.9 million.

Clean Juice had anything but a clean start. In the summer of 2014, couple Landon and Kat Eckles were essentially a world apart: Landon’s job in investment management often took him overseas for long-term stints. At home in Pennsylvania, Kat was juggling three children, with another baby on the way.

It was a tough point in the college sweethearts’ young marriage, and the need for change was clear. Landon began considering entrepreneurial options that would bring him back home and into a business partnership with his wife.

By this time, Kat, who calls herself “a recovering Taco Bell addict,” had immersed herself in a healthy lifestyle, beginning with daily green smoothies and a focus on plant-based eating. 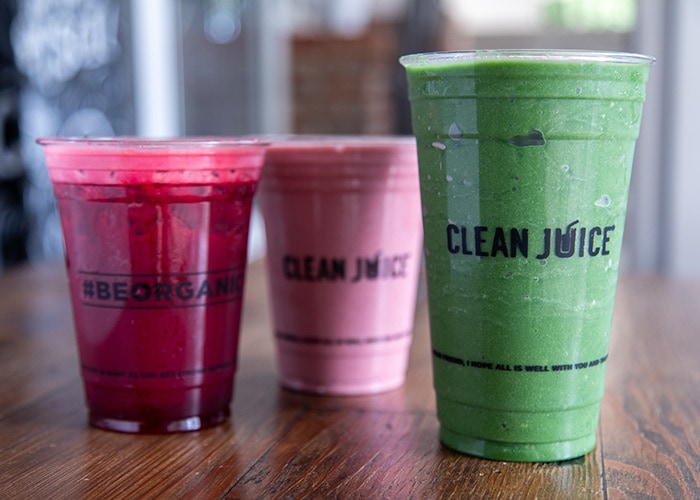 “When I had our first daughter, it started to hit me how important it was for me to take care of my body,” she says. “Smoothies were one of the first ways I started eating vegetables.”

As she and Landon set out to find an available franchise concept, the couple instead decided to open their own certified organic juice bar that clearly labeled ingredients of its menu options.

Where to locate was simple. For 15 years, the couple had been traveling to visit family in the Charlotte area. Over time, they became particularly attracted to north Mecklenburg County and Lake Norman. “We felt that if we were going to open a juice bar, it would certainly thrive here,” Landon says. Another draw was locally based Elevation Church, one of the nation’s fastest-growing congregations. Online sermons by Elevation Pastor Steven Furtick had caught Landon’s attention during his overseas trips.

The couple self-funded the launch of Clean Juice by using all their savings. The risk paid off. When the first Clean Juice opened on June 5, 2015, customers quickly proved supportive and devoted.

“If guests are coming into a juice bar, they’re trying to do something healthy for their body and deserve the best quality product,” Landon says. The company gained organic certification from the U.S. Department of Agriculture, a rigorous process that includes a 50-page application and a full review of all purchasing and sourcing.

The couple’s day-to-day looks different than at their business launch. “When we decided to start franchising, Kat and I stepped out of the store and started working more on the corporate development side,” says Landon, 34. As the chief operating officer, he directs marketing, operations, finance and store-development teams. Kat, the chief branding officer, is the visionary behind menu creation, determining what the brand looks like, and directing how the company communicates with its guests.

She’s also finding a sweet spot in balancing her Clean Juice leadership role with her pre-eminent position as a mom to five kids. “I hope that while they remember us being driven and hardworking, that it never came at their expense and that [they know] family is always the most important thing,” says Kat, 33. “I hope this helps them to follow their passion and do something that they believe in and that makes a positive difference in the world.”

Clean Juice has seen revenue grow more than tenfold in its first three years of franchising. With 80 locations and more than 75 additional shops in development nationwide, Clean Juice is on track to hit 100-plus sites by year end. The Eckles family owns seven corporate stores, and the rest are franchises. It was named the region’s fastest-growing company by the Charlotte Business Journal this year.

There’s no plan to slow down. “We have all these beautiful retail centers, but third-party delivery is super important in the quick-service retail space right now,” Landon says, revealing that pilot programs are in the works with UberEats, Grubhub and other similar services to try to iron out the logistics of delivering cold products. His goal is to launch systemwide by the end of the year, making it easier to get wholesome, organic products into more hands.