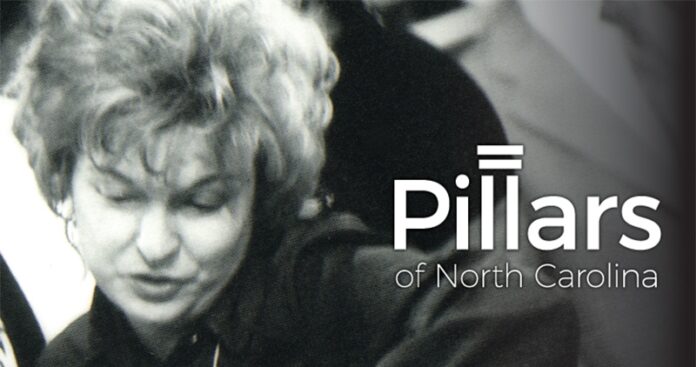 Tabor City native Jane Smith Patterson has spent her career pushing for civil and women’s rights in politics and the telecom industry.

Developing broadband systems to boost rural North Carolina remains a critical problem, decades after Jane Smith Patterson helped Gov. Jim Hunt kick-start the state’s work on the issue. Patterson was instrumental in developing the N.C. Rural Internet Access Authority, now the N.C. Broadband Infrastructure Office. During her tenure as its first executive ­­director from 2002-12, internet access increased from 32% of N.C. households to 82%, she says. Her work prompted a national broadband industry award in 2011 with a panel of judges noting, “Jane Patterson’s impact on public policy for rural broadband cannot be overstated. She is the leading voice of experience on making broadband available to all Americans.”

A native of Columbus County, she was 16 when she left to attend what was then called Women’s College of the University of North Carolina, now UNC Greensboro. She transferred to UNC Chapel Hill to finish her undergraduate degree. In 1994, she earned a master’s degree in global information infrastructure from N.C. State University.

Earlier in her career, she worked as a research assistant in mathematical psychology, an editor for what is now McGraw-Hill and a real estate agent. After Hunt’s first election in 1976, she became deputy secretary at the N.C. Department of Administration, a rare post for a woman at that time. When Hunt returned as governor from 1993 to 2001, she was an adviser for policy, budget and technology. Between stints in state government, she was director of contracts and, later, a vice president at ITT’s telecommunications division.

In 2017, Patterson received the North Carolina Award for her public service. A resident of Chapel Hill, Patterson, 77, is a partner in Broadband Catalysts and serves as a board member at the Z. Smith Reynolds Foundation and the N.C. Telehealth Network, which promotes affordable online medical care. Her comments are edited for length and clarity.

[Tabor City] was still segregated at the time I grew up. Our town fought the [Ku Klux Klan]. The Klan came across into North Carolina from South Carolina; we were on the border. They would put crosses on the front of their cars with lights and run them with a battery. My dad would say to me, “Jane, we don’t believe like these people. It’s not the shade or color of your skin that determines who you are. It’s an education and how you use that education for the betterment of all the people.”

We changed the face of government [under Hunt’s leadership] so that it reflected the people of the state. We began to hire more women, more minorities. We put in an affirmative action plan into the state. We also began doing more training for our public employees.

[We brought in] citizens on special programs such as advocacy councils for women and people with disabilities. We hired the first African American person to head the N.C. Human Relations Council in the 40 years it had existed.

I would have run, at one point, for lieutenant governor. I have a husband whose practice of law is 24 hours a day. Our kids would have had no parents if I were there. When you have children, it’s a commitment you make, and you can’t just walk away from it. I made a decision not to [run]. It worked out better for me because I ended up going to work for ITT Corp., which was getting me back into my field of telecommunication.

I fought very hard for women’s rights both within the statutes of the state but also in the Democratic Party. I lobbied through the requirement of equal division of delegates to the national convention, which is the nominating process for candidates who run nationally. I sort of went against Jimmy Carter, who I thought was with me on it, but the labor unions got to him overnight and changed his position.

I think one-party rule all the time is not good for any state. The most important thing for the state is the appropriate education for the folks who want to run for office. No matter who ever gets into the office, they are there for the good of the state. In my lifetime, we’ve had two Republican governors who were pretty good: Gov.[James] Martin and Gov. [James] Holshouser.

All the telephone cooperatives have been incredible, all across the state, in the most rural areas.

There are laws that prevent you from doing innovative things to get into rural areas. Those were argued into the laws of the state by representatives of the companies. In North Carolina, we fought it for five years and finally lost it with House Bill 129 [which passed in 2011, restricting municipalities from building publicly owned broadband networks.] In the long run, I think the companies would have been far better off to have gone and moved ahead to get internet to the homes in such a way that we could do telehealth.

At one point, there was a move to fire me as the executive director [of the Rural Internet Access Authority] because I was pushing too hard. I was not fired. When things are changing in an industry, it’s hard to move that through very fast. You will always get some folks who think it’s better if they don’t move ahead.

Gov. Hunt wanted me to come back and I [said], “Yeah, if we can do fiber across the state from Murphy to Manteo.” We did the North Carolina Information Highway.