How Wilmington’s Shuckin’ Shack is taking oysters on the road 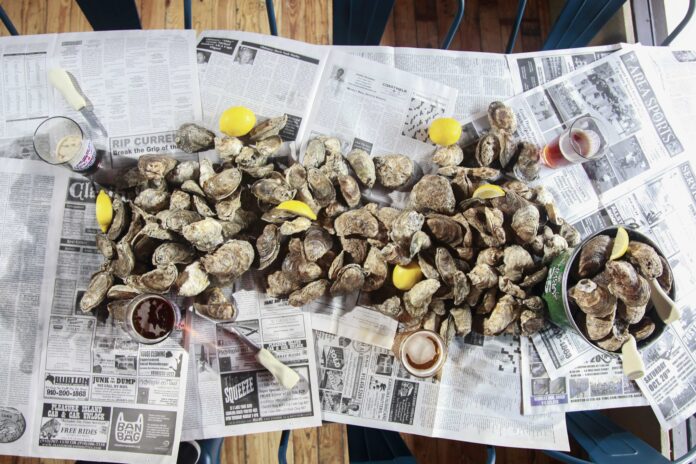 Wilmington-based Shuckin’ Shack Oyster Bar is a 15-location chain with plans to open several more restaurants this year. Sean Cook and Matt Piccinin started the business in a 900-square-foot shack at Carolina beach in 2007. Average revenue per store now tops $1 million, Piccinin says. CEO Jonathan Weathington, who joined the company in 2014, talked about the company with Business North Carolina.

What is your education and career background?

I received my bachelor’s in Political Science and Government from UNC Wilmington and a master’s in International/Global Studies at N.C. State University.

I’ve worked in the customer service field since 1999. After finishing my master’s program at N.C. State, I realized I wanted to be part of creating something from the ground up. I worked for PostNet, Blockbuster Video, Best Buy, The North Face, BB&T and various other small businesses before joining the team at Shuckin’ Shack.

What has been key to the company’s growth?

Consistency, especially as we sign on with new franchisees and continue opening new locations. It’s important to us that we remain true to who we are, serving the freshest of seafood and quality menu items to our guests. We don’t attempt to be everything to everyone, rather, remain focused on staying true to the brand.

Our biggest milestones have actually been our franchise stores winning multiple awards in virtually every city in which they’ve opened. As I understand, that’s pretty rare.

How has the company grown in terms of units?

The first location opened in 2007 and second location in 2012. We started franchising in 2014. Our sales have grown systemwide every year from 2007 to today. We remain dedicated to offering a consistent product and [to] our customer base, [which] has grown even when the casual dining industry is slowing.

What is the role of the company’s founders?

One of our founders [Matt Piccinin] is here on a day-to-day basis, in a more hands-on position and in an advisory role. Our other founder [Sean Cook] is not part of the day-to-day business, but is involved in the board and long-term growth strategy.

Who has provided the company’s financial backing?

What are your growth plans?

Is there a goal of number of units?

No — we just want to make sure we’re providing a consistent product. The number will determine itself.

How many stores are company-owned?

What is the typical investment by franchisees?

Is there a steady supply of oysters?

There’s a steady supply year-round if you’re willing to multi-source. N.C. oysters are not available during certain times of the year. We’re able to get oysters 365 days per year because we multi-source.

How is the company adapting to the demand for healthier dining?

We’re in the best position possible because seafood is very healthy when prepared correctly. We serve a range of seafood aside from fried options. Steamed seafood is actually our best seller. Salads, vegetables, and lighter sandwiches are all options. People want great food and want to know that it’s not harming their body.

Have you ever been to the Sunnyside in Williamston, often called the state’s best oyster bar?

I’ve never been, but have heard of it and would LOVE to go! I believe they’re only open seasonally.