Maureen Anders, left, and Adria Ruff opened the first AR Workshop in downtown Pineville in 2016. It has since grown to 139 shops in 31 states.

Like a visit to a favorite aunt or girlfriend’s home, stepping through the doors of the turquoise storefront making up Anders Ruff Workshop in downtown Pineville provides a welcoming, familiar feeling.

Various handmade crafts adorn the walls, shelves and tables of the rustic, chic shop that opened in 2016, including do-it-yourself painted signs, succulent pots, pillows, jewelry and bags. It’s like a Pinterest board come to life — and it’s all made right here. Paper covers tables slathered with paint, and tin cans filled with hand tools and paint brushes sit adjacent to a wall of dozens of paint cans and a power tool station. The space hosts dozens of monthly workshops, fundraisers, parties, pop-up events and camps, welcoming blossoming artists of all ages and skill levels.

The inviting vibe is exactly what co-founders Adria Ruff and Maureen Anders aim for in their 139 AR Workshop locations across 31 states. Sales are expected to reach $24 million this year.

It started 10 years ago at a preschool open house in Charlotte. Ruff and Anders, who then had small children, had recently moved to the area and started chatting about their mutual background in the arts and love for graphic design.

“She invited me to her house a week later, and we shared portfolios, and our styles meshed really well,” Anders says. “I was like, ‘You’ve got to sell your work. … Why don’t you start a business?’ And she said, ‘Well, I’m not doing it alone.’ So I said, ‘Great, let’s do it together.’”

They started an Etsy shop online, selling printable digital graphics for kids parties that could be used for everything from invitations to decorations. It was successful, but the women found they were receiving lots of questions from parents who wanted to know how to use the graphics and decorate the parties in a do-it-yourself way. So they created the Anders and Ruff blog and online shop.

“We showed them how to use the printables, but we would also show them what desserts to make and what drinks to have,” Ruff says. “Every detail and every aspect of the party, we taught them online.”

They wanted their customers to “see the whole picture,” Anders says. “We wanted to make it easy for them in a DIY way. … We were both stay-at-home moms with little kids at home, and we didn’t know what it was going to turn into. We just wanted something fun and creative to do.” 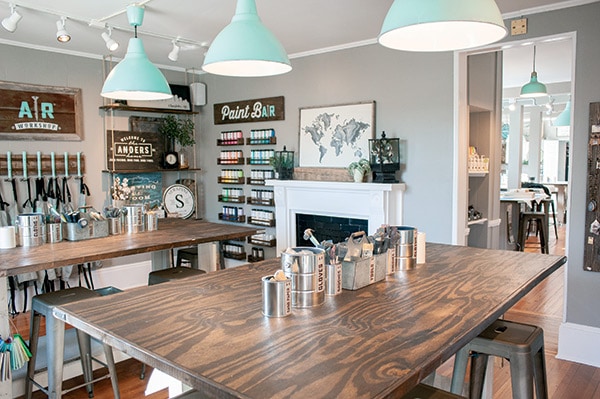 It took off right away. Their designs and decor have been featured in magazines like Better Homes & Gardens and Country Living, and the women formed business partnerships with companies such as moviemakers Universal Studios and Sony Pictures, creating party decor that coincided with their popular films. Seeing the demand for DIY crafts and projects, Anders and Ruff decided to bring the blog to life, opening the first AR Workshop in Pineville in 2016.

“At the time, wood signs had become a design craze. And I also saw these paint-and-sip concepts out there. I went to one, and it was fun, but I didn’t want to hang up what I painted,” says Anders. “I thought, something’s wrong with this. You’re paying money and having fun but you don’t feel good about what you made in the end.”

They preferred projects that would be easy, fun and good enough that customers would be proud to display them at home. It’s like “you’re going to your girlfriend’s house,” Ruff says. “Except you don’t care if you mess it up a little.”

“There’s a stencil cut for you if it’s a stencil-based class,” Anders says. “So nothing’s hand-painted, but there’s all kinds of different techniques and methods. … We walk you through step-by-step on using the power tools. … When you’re finished, you take it home the same day.”

AR Workshop has 12 corporate employees in Pineville, while each location typically employs 10 to 20 workers. It costs $62,920 to $116,820 to open a franchise, which includes a $25,000 franchise fee. Anders and Ruff have established certain standards to give each franchised location a similar, homey feel.

“Everything in our workshops is DIY,” Anders says. “All the decor, the shelves, tables, everything, we build from scratch. So the franchisees are truly building out their studio.”

While their business started from scratch, the two founders have serious business credentials. Before moving to the Charlotte area, Anders, who earned a degree in industrial and operations engineering from the University of Michigan, was an account manager for GE Healthcare, while Ruff, who studied fashion merchandising, design and product management at Auburn University, worked in the corporate office of fashion retailer Limited Too. Building a business involves taking risks, which, in their case, reaped rewards.

“I am 100% into jumping in with both feet before most people would feel comfortable doing so,” Anders says. “If [we] had waited, [we] would have lost momentum to what was organically getting a huge reach.”

The positive DIY experience of AR Workshop is what keeps people coming back and is what has made the business so successful, Anders says. “They truly feel like they did it themselves. We have had over 500,000 of our projects made across AR Workshop locations in a little over three years.”

Anders and Ruff both agree there’s something special about the fact that their workshops empower women.

“It’s predominantly women coming in, and some are afraid to use power tools,” Ruff says. Though her dad owned a hardware company, she says she had never used a power drill before starting the business. “We teach them, and they’re so proud. I love empowering women to feel that they can do these things that have typically in the past been ‘men jobs.’”

Workers stab each other in fight at Asheboro restaurant