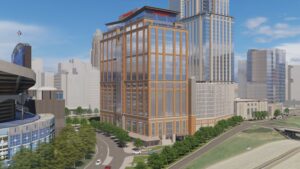 A rendering of Honeywell’s new headquarters as it will appear in downtown Charlotte.

Get ready for a new addition to Charlotte’s skyline. Honeywell (NYSE: HON), the aerospace product and technology giant, has chosen Legacy Union in downtown Charlotte to be the home for its new corporate headquarters. The Fortune 100 company has penned a long-term lease agreement with commercial real estate agency Lincoln Harris, which is developing the new 23-story office building.

Honeywell announced in November that they planned to relocate the headquarters from suburban New Jersey to Charlotte, marking the most prominent corporate relocation in North Carolina in recent years.

Honeywell, the primary tenant, will occupy nine floors and roughly 280,000 square feet of space. The company expects the office to house 750 employees by 2024. The new building will feature ground floor retail, a rooftop terrace, around 800 parking spaces and will be decked out with all the latest Honeywell Building Technologies products. Groundbreaking is scheduled for September this year and expected to be completed in 2021.

“Legacy Union will offer our employees world-class amenities in a state-of-the-art building in dynamic Uptown Charlotte, enabling us to recruit and retain the top talent we will need to support our strategic objectives,” Honeywell Chairman and CEO Darius Adamczyk says in a press release.

The building itself will part of Lincoln Harris’ 10-acre mixed-use development project spanning between Tryon Street and Bank of America Stadium. It is on land formerly housing the Charlotte Observer for decades.

As part of the move, about 250 Honeywell positions will relocate to Charlotte by September 2019, with 500 more positions added over the next five years.

North Carolina and local governments have pledged as much as $88 million in incentives to Honeywell, which hinges on meeting job and investment targets.