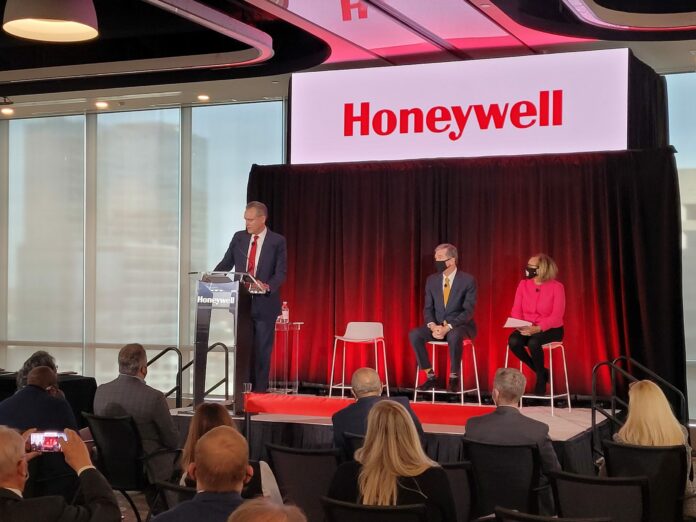 Honeywell CEO Darius Adamczyk says expansion at the Queen City headquarters is a priority as he builds one of the nation’s largest companies.

He also cited the ability of North Carolina’s partisan politicians to come together on business issues as a key factor in attracting Honeywell, which moved its headquarters from the New Jersey suburbs of New York City three years ago.

Adamczyk made the comments after an official opening ceremony at the company’s downtown Charlotte headquarters. The event had been delayed by the pandemic. Those attending included Gov. Roy Cooper, Charlotte Mayor Vi Lyles, both of whom praised Honeywell’s support for area philanthropies and causes, including co-sponsoring mass vaccination sites during the height of the pandemic.

Both the city and state have exceeded Honeywell’s expectations since the move, says Adamcyzk, a native of Poland who became CEO in 2017. “We hope to fill up this headquarters and hopefully build another building to house more employees,” he said in an interview. “That is our objective. We’ll continue to create jobs here.”

The company now has about 1,000 employees in Charlotte, most of whom are working three days a week at the office and two days remotely. North Carolina offered Honeywell about $42.5 million in incentives while Mecklenburg County and the city of Charlotte provided an additional $46 million. Much of the money is tied to creation of at least 750 jobs, which officials say Honeywell has exceeded.

Asked how Charlotte differs from Honeywell’s previous locale, Adamczyk said, “It is pragmatic. It understands the world of business, community and society. It really does a great job balancing those things.”

While New Jersey is viewed as a reliably Democratic state, North Carolina remains politically divided. Gov. Cooper, a Democrat, won a reelection bid quite easily in 2020, while Republicans expanded their majorities in the N.C. House and Senate in the same election cycle.

“It’s a purple state that somehow figures out how to work together. We found that appealing,” Adamczyk said. “Whether you are blue, purple or red, you find out how to get things done to create a thriving city and thriving state. We saw people come together to make great things happen.

“We want to do what is right for business, the community and society. If  people remember what team they are on whether it’s city, state or country, I think we will be better off.”

Adamczyk also discounted the notion that Honeywell should be split up, following the recently announced plans of GE to break into three parts. Both have long been considered among the nation’s leading industrial conglomerates. He noted that Honeywell “isn’t necessarily a conglomerate” because each of its businesses relates to automation and control systems. “Whether it’s controlling aircraft, industrial equipment, facilities and other buildings, there is that theme,” he says.

“No. 2, we’ve been a successful company and we’ve done well. No. 3 and most important, we add value at the center whether it’s Honeywell Connected Enterprises, which is our software, or our technology centers throughout the world or our management expertise.

He added, “We aren’t a company to do something just because other companies are doing it.”

Honeywell is the third-largest public company based in North Carolina, trailing Bank of America and Lowe’s in terms of market cap. Its valuation is about $143 billion. It has had a total return of about 125% over the last five years, matching the S&P 500 Index in that period.