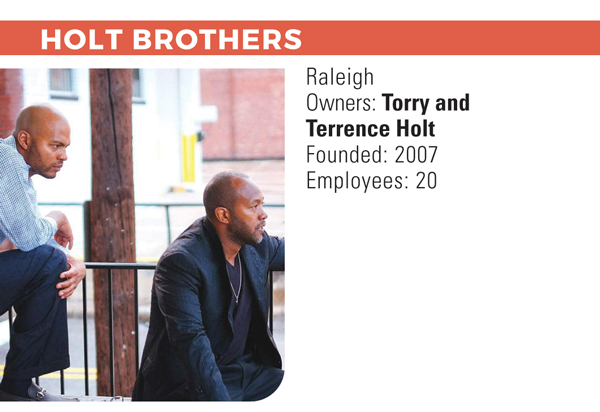 Fame is fickle. Gibsonville natives Torry and Terrence Holt benefited from the stardom achieved from their gridiron success at N.C. State University and a combined 16 years of National Football League experience. Their names opened doors, but nothing has come easy, says Terrence, the company president.

“People answered our phone calls and would even set up meetings with us, but sometimes they just couldn’t view us outside the light of being former football players,” he says.

Their corporation consists of construction and development companies, a foundation dedicated to their late mother, and a football training business for young athletes.

The company now has general contracting and construction management projects in North Carolina, Tennessee and Virginia. It has partnered on structures such as the $47 million N.C. Central University Student Union in Durham, which is expected to open soon, and the $58 million Raleigh Union Station train depot and event space completed in 2018. It worked with Raleigh-based Clancy & Theys on the latter project.

Their launch in 2007 coincided with the onset of a recession, but they persisted. “That reset the table for us,” Terrence Holt says. “Some were going out of business, but because of playing in the NFL, we had resources we could bring to bear on the market. We could convince people to give us a shot.”

Early on, the brothers dabbled in residential construction “which didn’t seem like such a good idea,” he says, but then settled on commercial building. Their pro football contracts “enabled us to spend four years researching what we wanted to try out.”

Their first contract was to renovate a Raleigh building for payroll giant ADP. “It was a $60,000 project, but Torry and I were there three or four times a week. It could have been $60 million. We were just overjoyed to have landed a project.”

Hurdles remain. As a historically underutilized business, their company must go an extra mile to land contracts, Holt says. Businesses “do business with the people they know,” and most construction companies are white male-dominated, he says.

“In the NFL, Torry had to make the catch or I had to make the interception, or we might not be on the team next week. There was no margin for error,” he says. “This is not a business for the meek, the faint of heart.”